The Turnage Theater in Images: a Retrospect in Melody - Chapter II

Login to Send a Private Message to Stan Deatherage
Publisher's note: Chapter II is the continuation of a series that began with The Turnage Theater in Images: a Retrospect in Melody - Chapter I. Be aware of this one policy of mine - I did not publish images of every performer, only the ones I rather enjoyed. My mother made a deep impression on me: "If you can't say anything nice, don't say anything at all." Additionally, all photos for this article have never been published prior to this post.

This story is a sad one, with the shuttering of the Turnage, but with the positive truth that good music, from good bands played upon the old stage that served many purposes, and some, like myself, will argue that the Turnage Theater's best days are ahead.

To that end, I offer this tale, through a bevy of images, that are a short history of some good times for me, and the unmitigated proof that the Turnage can be used for the benefit of the community, at least those of us who enjoy a good live show from time to time. 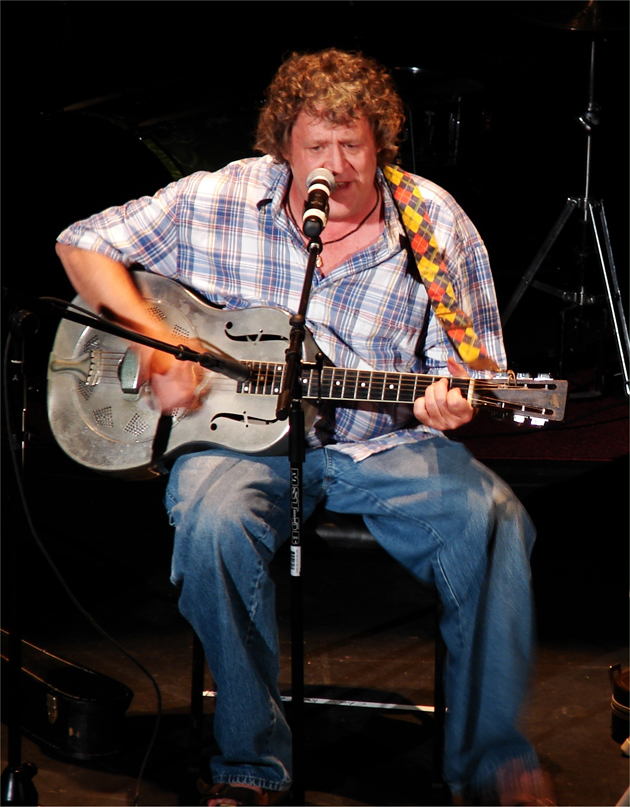 Light'n' Wells has a good hand at traditional Blues/ Country/ Bluegrass, whether he accompanies his perfectly stylized vocals, with a Dobro or a 6-string accoustic guitar: Above and below.     photos by Stan Deatherage 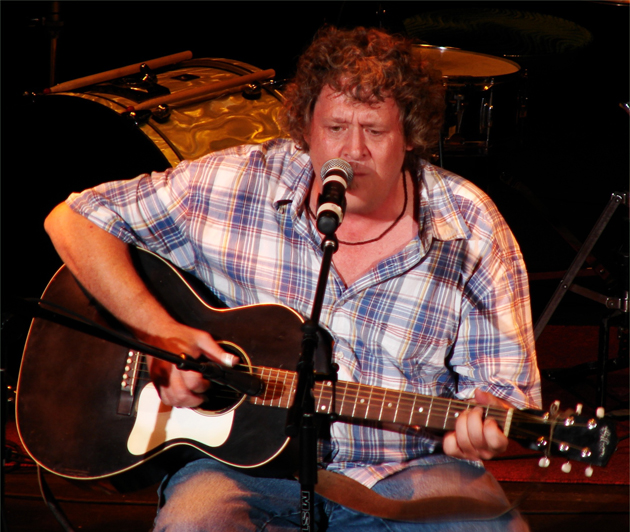 One of the five best musical acts that I heard play the Turnage Theater was Bearfoot, a Country/ Bluegrass ensemble, with an ear for a popular mode of expressing their art by virtue of their outstanding talent. Bearfoot is comprised of two decent fiddle players (Odessa Jorgensen, Angela Oudean), a decent bass (Kate Hemre) and two excellent pickers (Jason Norris, mandolin, Mike Mickelson, guitar), and five outstanding voices together, and most especially, Odessa Jorgensen alone. Bearfoot played the Turnage Theater on September 18, 2009.

Bearfoot's compact disc, "Doors and Windows," primarily all original tunes, is a fine representation of their unique abilities, and one of the ten best pieces of music that I have heard in the last two years. Presently, only Jason Norris and Angela Oudean remain with the band, but these two are a fine nucleus from which to build another ensemble. Bearfoot is one of the six beast bands to play the Turnage Theater since June 30, 2009. 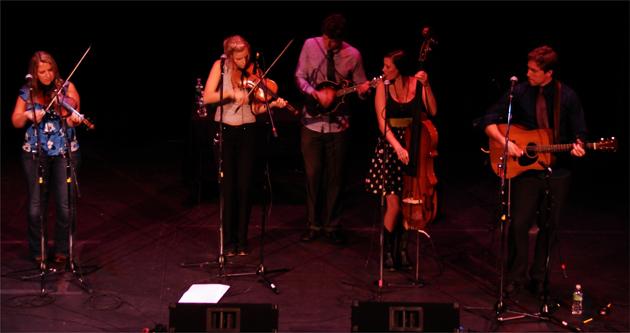 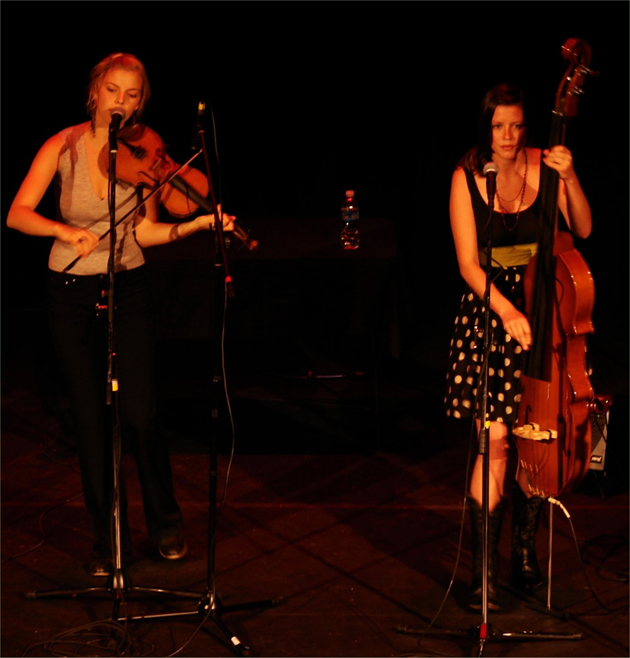 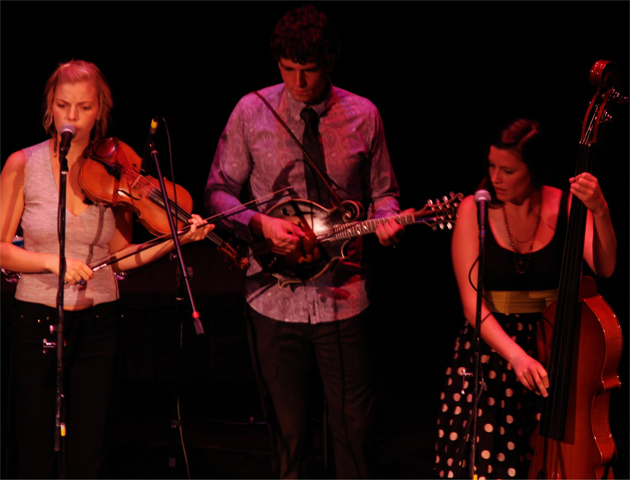 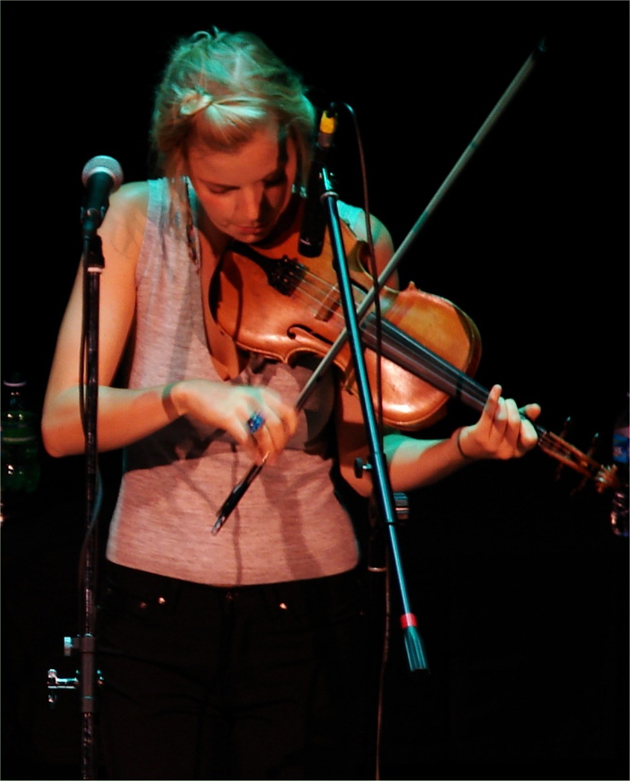 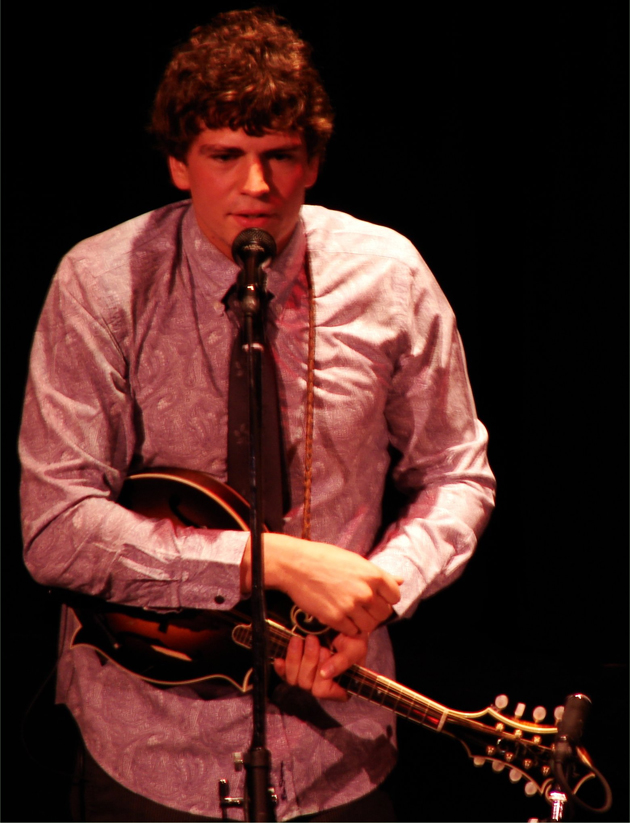 Jason Norris takes a break from the mandolin, and on occasion, offers his vocal harmony: Above.     photo by Stan Deatherage