Book Report – Testimony Robbie Robertson – The Band | Beaufort County Now | Apparently, one of the best ways to start an argument over music is to discuss the inter-personal relationships of the various members of The Band.

Login to Send a Private Message to Bobby Tony
It is a long standing habit of mine to write a book report on each book I read. It started out so I could review my thoughts later without having to re-read the book. It also helped me to process the contents of the book into a Cliff Notes version. I just finished reading the following book, and I highly recommend it to anyone who wants to know what the life of a Rock and Roll band is like.


Apparently, one of the best ways to start an argument over music is to discuss the inter-personal relationships of the various members of The Band. The Band was originally part of The Hawks who backed up Ronnie Hawkins, later left and formed their own group, still called the Hawks. They toured as the Backup Band behind Bob Dylan's infamous 1966 "Gone Electric" European tour. They later changed the name of the band to The Bank and the rest is rock and roll history. After many years as playing gigs and backup, they recorded and published their first Album. "Music From Big Pink" in 1968.

The 1960-1970s were hard on rock and roll bands, mainly due to the drug culture and the full tilt boogie lifestyle of rock and rollers. The Band eventually self-destructed as a result of the drug use and the over indulgence of most of the members. Only one member seemed to have a clear focus on life outside the glow of drugs. That was Robbie Robertson who went on to a very successful career as a solo artist as well as movie producer.

Regardless of the personal differences of each group member, all music lovers were fortunate that these five guys did get together and make some great music. There is no doubt in my mind that Levon Helm was the ultimate showman or front man. Garth Hudson was the ultimate musician. Both Richard Manuel and Rick Danko were integral to the band's combined personality. Nevertheless, there is also no doubt in my mind that Robbie Robertson was the creative genius behind The Band's music. He was a Benign Svengali, behind the group who wrote most of the music and probably held it together long after the ravages of drugs and alcohol would have caused the group to disintegrate into dust. He was an active participant in the drugs, sex and over indulgence of the life style to be sure, but he also had a childlike fascination with the ride he was taking. He also possessed a great memory which is evident in the stories he tells throughout the book.

He realized that the band was disintegrating into a self-indulgent drug haze. He was also married with three kids and decided that the touring years on the road (since he was 15) led to personal destruction. He proposed one last Giant Performance, which would be made into the film The Last Waltz (1976), directed by filmmaker Martin Scorsese. Robbie no longer cared for life on the road and that was the final dissolution of the original five members as a group. The Band briefly disbanded from touring but later various incarnations of The Band continued with all the original members but Robbie. The long slow decline of the members due to heroin and other drug and alcohol problems took years to materialize. 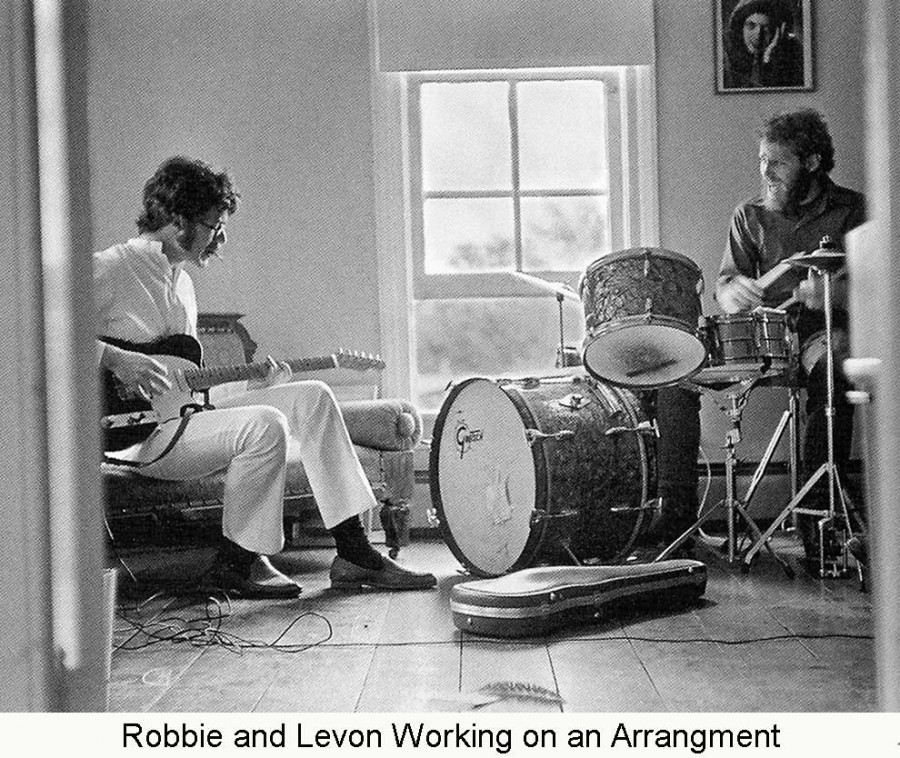 Levon wrote a book, This Wheel's on Fire: Levon Helm and the Story of the Band, which accused Robbie Robertson of stealing writing credit for the most of the songs the Band recorded. All the members but Robbie had continuing financial troubles due in large part perhaps by their drug use and poor management of their finances. Over the years, Robbie maintained a positive tenor to the members of the band in the face of increasing criticism in the blog world about him "Cheating" the other members out of songwriting royalties. The initial split of publishing royalties was split 5 ways, even thought Robbie was clearly the source of inspiration for the lyrics and melody of most songs. The songwriting credit was based on collaborations with Robbie being the main contributor of lyrics and melody. That is a subject itself for a different article. The difference between songwriting credit and arrangement credit has always been contentious.

My opinion is that Robbie was perhaps the only member of The Band who realized it was a business as well as a passion. He continued with his creative writing and the other band members continued to perform. Robbie produced the album"Beautiful Noise" for Neil Diamond in 1976. He sourced and scored music for several movies: Raging Bull, The King of Comedy and The Color of Money.

I was aware of The Band's music primarily because of two songs. "The Weight" & "The night they Drove old Dixie Down." Both songs became an anthem for the group. I can honestly say that I did not even know the names of any of the members of the group until the last few of years. My first knowledge was hearing about Levon Helm on the Don Imus show on Fox News. I am not a big Imus fan but he did occasionally have some good musical guest on the early morning simulcast from radio and Fox News. I later learned that Levon played a part in "The Right Stuff" which is on my list of favorite movies due to my interest in the Space Race of the 1960s through the end of the Shuttle era.

After watching The Last Waltz a couple of year ago I became interested in the story of The Band. That is one of the benefits of being retired; you can immerse yourself in a research project. I searched out multiple YouTube videos of the Band and interviews with various members. I also did some on line reading of various articles. No mention of The Last Waltz would be complete without a link to Wyatt Sanderman Day's review of the iconic documentary. Here is its on BCN.

When Netflix produced the documentary "Ain't in It for My Health: A Film About Levon Helm," I became more intrigued with the personal interplay between these five guys who played some of the best Rock and Roll ever. It is not unusual for Rock and Roll bands to break up. Hell, when you get any group of talented artist together there will be friction. Living your life on the road is not an easy living regardless of the rewards. The phrase Sex, Drugs and Rock and Roll pretty much sums up most of the musical landscape.

I have never been one to project hero status on entertainers or well-known celebrates as I have always felt they are no different than the rest of us with the exception that they live their live on a large stage with Lights, Camera and Action always on.

So far, I have not said much about the book in this long rambling '?Book Report?.' That is as is should be. If you have any interest in the story, it is well worth the time-spent reading. My reading habits have usually leaned toward biographies and autobiographies because I have a fascination with what makes people tick.

Finally, last year Robbie Robertson released his autobiography "Testimony." He tells the his version of the story during the era from 1966 until 1976. Unlike Levon's book (which I have not read yet), Testimony is full of loving stories of the good and bad times of the five members of The Band as well as many people that Robbie met and socialized with in the entertainment business. He resist the temptation to engage in a personal battle since only he and Garth Hudson remain alive. He merely tells the story from his perspective with a somewhat melancholy sadness without the rancor or bitterness which consumed his old friend Levon Helm. The book ends shortly after the filming of the Last Waltz in 1976. Robbie sums up end in a couple of paragraphs.


"The Band had come to a crossroads. So many mixed emotions leads to confusion – and confusion can lead to self-destruction. The feeling was, if we can't break something else, we'll break ourselves. None of us wanted to destroy the thing we loved, but we didn't know how not to – and we didn't know how to say good-bye.

Still, through all the turbulence, I am left with such a deep appreciation for my journey, this shining path I've traveled being part of The Band – and there will never be another one like it. Such a gift, such talent, such pain, such madness ...I wouldn't trade it for anything."


I also find it interesting to listen to one of the survivors of the decadent lifestyle that many musicians live. I have always thought that given enough money, temptation, access to drugs and adulation even the most dedicated and prudish Puritan would succumb to what I used to call the "Jimmy Swaggart Syndrome." When Elvis died and the true story came out about his cocoon of enablers, I was convinced he was no different from any other person. The difference may be that he and most of the celebrities had the ability to control their environment and attract the human equivalent of a Remora Fish. The difference, however, is the celebrity enablers are not quite as symbiotic as the Remora. It may not be a stretch to say that Robbie Robertson understood the the road they were own would not end well.

One of the main takeaways of this book may be that you should be careful who you associate with, because you become your group eventually. Motivational speaker Jim Rohn said, “You are the average of the five people you spend the most time with.” I was fortunate that my close circle of friends go all the way back high school and grammar school and not one of them or me got into the drug scene. We may have veered into the fast lane for a while but we survived those excursions of our youth.

Perhaps another takeaway is that the human body can withstand a continual self-destructive assault.However when it is over, it is over, usually without any warning.


“But of that day and hour no one knows, not even the angels of heaven, but My Father only. (Matthew 24:36)


I must add an obvious caveat that all autobiographies contain a certain amount of self-serving memories and justification for actions taken. They should be put in the perspective of a broader view from numerous sources. That is where the argument statement from the first paragraph comes in. Robbie knew the train was getting off the tracks. Maybe the best way to represent the essence of this book is to entice you with an excerpt from pages 452-453 (the time frame of this excerpt is the Fall of 1976) of this 500 Page book. 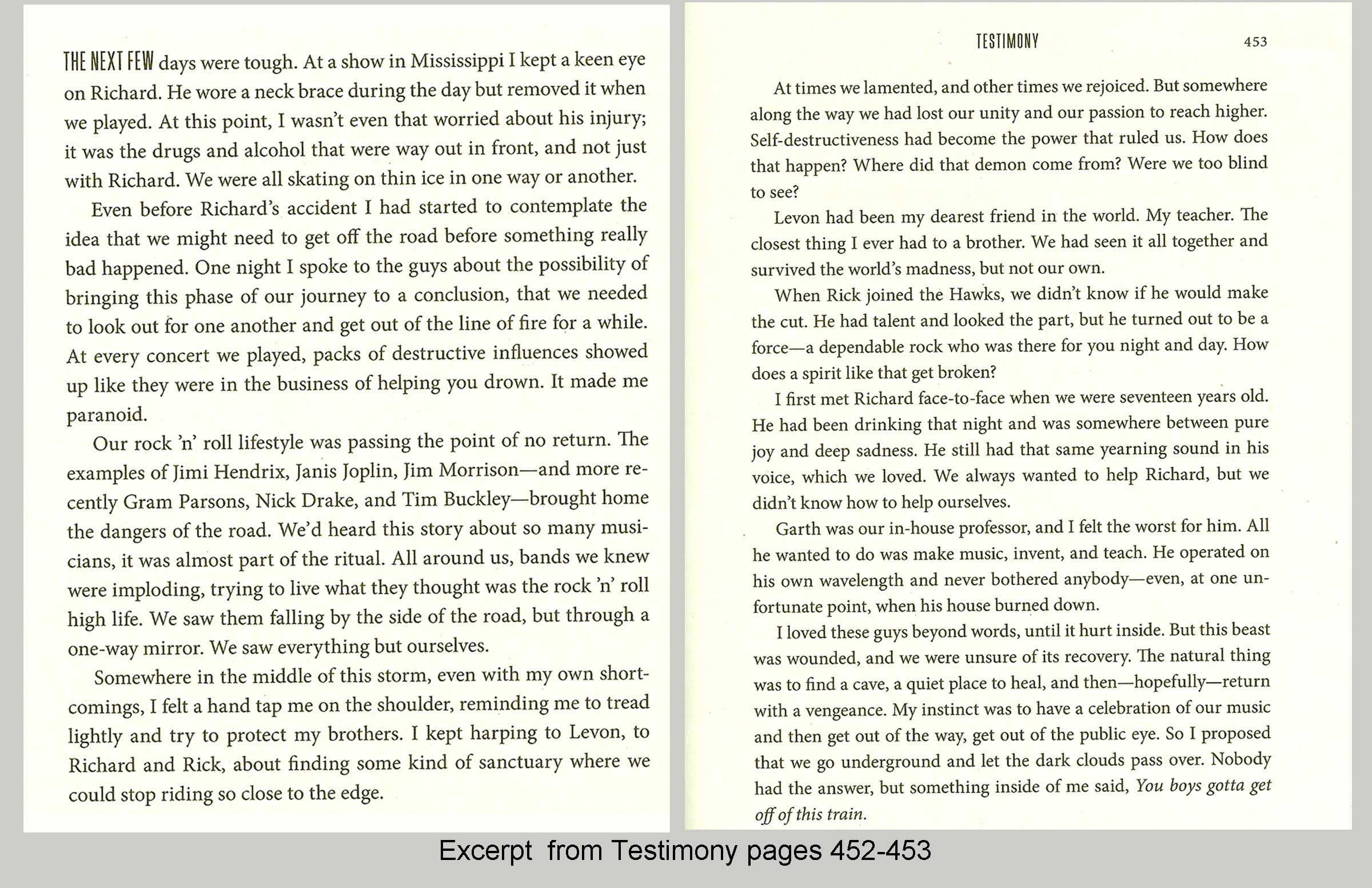 Click here to enlarge the text.
Here is a teaser of Robbie Robertson's story telling in an interview he did about the book. You can purchase the book here on Amazon.