Is Eric Holder getting desperate? Plays the race card | Beaufort County Now | U. S. Attorney General Eric Holder, responding to criticism of him over the Fast and Furious gunrunning scandal said: "This is a way to get at the president because of the way I can be identified with him, both due to the nature of our relationship, the fact that we're both African-American.

Is Eric Holder getting desperate? Plays the race card

On Sunday (12-18-11) U. S. Attorney General Eric Holder, responding to criticism of him over the Fast and Furious gunrunning scandal said: "This is a way to get at the president because of the way I can be identified with him, both due to the nature of our relationship and, you know, the fact that we're both African-American." 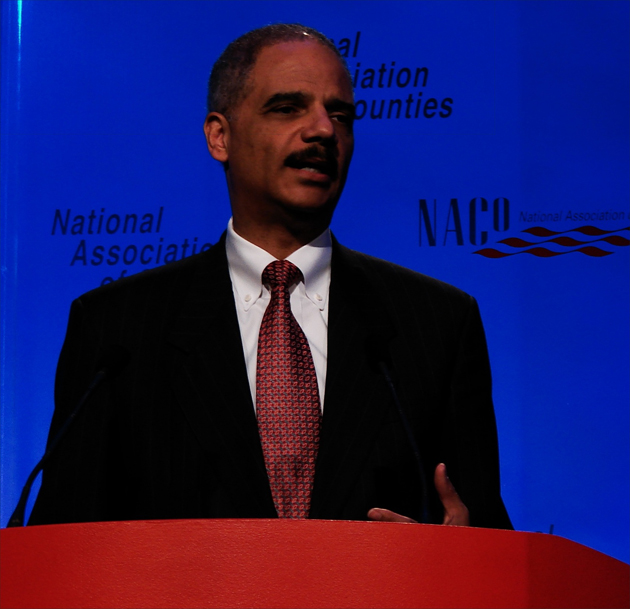 Attorney General Eric Holder speaking to the National Association of Counties in Washington, DC, march, 2011: Above.     photo by Stan Deatherage

Since Sunday Obama has refused to comment saying whether he agrees with Holder or not, even after having been asked a direct question by the Daily Caller. But Rep. Allen West, also a black politician who has been very critical of Holder said: "This is sort of the last refuge that people on the left will go to when they're in trouble," Walsh said in a phone interview. "They'll accuse their opponents of racism. My God, we've got tons of problems in this country and ... this president, is through Eric Holder, saying, 'Nope, you can't criticize me. If you criticize me, we're going to accuse you of racism.' Shame on them, that's terrible."

Click here to read the Daily Caller report on the story.

We take this to mean that Mr. Holder knows he is in serious trouble. When all other defenses fail, play the race card. We think Holder's days are numbered. How long he has we suspect is directly related to how long it takes for the pressure to threaten Barack Obama himself.

But Holder cowardly (remember, his word about Americans being afraid to have a conversation about race) defense we suspect is but a reface to what we will hear more and more as we approach next November.

Holder is a victim, as he tries to paint himself, but not of race. He is a victim of affirmative action. He was not qualified to be Attorney General in the first place. He has proven he is more of a politician than a lawyer and that goes back to his days in the Clinton Administration (Google "Marc Rich" to see what we mean).

Holder had no administrative experience and came from a law firm noted for representing terrorists. He brought little relevant legal experience to the job either and no scholarly record at all. The highest qualification was that he is proficient in Chicago-style politics. Race has nothing to do with all this.

On Fast and Furious either Holder knew and failed to act properly or he was grossly negligent and incompetent. Either way, he should be removed or Obama impeached if the president does not do his duty.