NFL's Free Speech: Kneeling For The Anthem Is Fine, But Fighting Breast Cancer And Domestic Violence? Shut Up. | Beaufort County Now | The NFL has one heck of a double standard when it comes to free speech, as was abundantly illustrated on Sunday.

NFL's Free Speech: Kneeling For The Anthem Is Fine, But Fighting Breast Cancer And Domestic Violence? Shut Up.

Published: Wednesday, September 27th, 2017 @ 12:01 am
By: Daily Wire   ( More Entries )
Publisher's note: The press release was sent to me by Ben Shapiro, who represents the Daily Wire, and since this is the most topical news event of the day, it should be published on BCN.

The NFL has one heck of a double standard when it comes to free speech, as was abundantly illustrated on Sunday. The league had no problem with players showing disrespect for the American flag and national anthem by kneeling during the playing of the anthem, but there have been numerous instances in which the league has fined players for using their free speech to publicize worthy causes such as Mental Health Awareness week, fighting breast cancer or targeting domestic violence.

In 2013, Chicago Bears wide receiver Brandon Marshall was fined $5,250 for wearing green shoes in honor of Mental Health Awareness week, which was especially poignant because Marshall himself suffered from Borderline Personality Disorder, as FOX Sports noted. 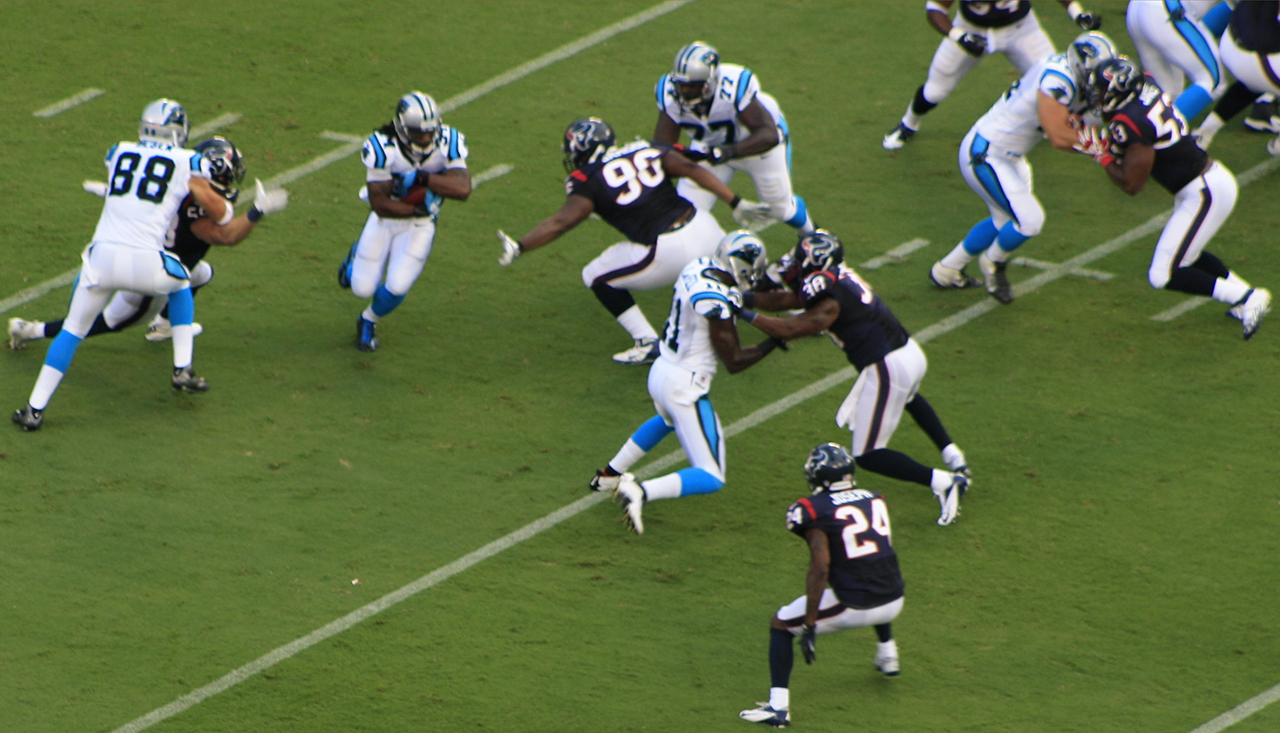 DeAngelo Williams, when he wore the Panther colors in 2012, running for daylight: Above.     photo by Stan Deatherage    Click image to expand.

Pittsburgh Steelers running back DeAngelo Williams was fined $5,787 in 2015 for wearing "Find the Cure" eye black with the message "We will find a cure" printed along with a pink ribbon, according to Aditi Kinkhabwala of NFL Network. His mother died of breast cancer in 2010.

Another Steelers player, William Gay, was fined $5,787 in 2015 for wearing purple cleats to bring attention to domestic violence. Gay's action was also moving because his mother was killed in an act of domestic violence.

The Steelers' Cameron Heyward was fined for wearing eye black to honor his father, Craig "Iron Head" Heyward, who died of bone cancer in 2006.

If kneeling for the national anthem as free speech is fine with the NFL, but speaking out for the fights against breast cancer and domestic violence as well as highlighting mental health issues is a problem, the league deserves whatever derision it receives.
Go Back