How Much Does Government Spend on School Supplies? | Beaufort County Now | This is the third of a three-part series examining the issue of school supplies. | school supplies

How Much Does Government Spend on School Supplies?

Every year, public schools receive millions from federal, state, and local governments to purchase of books, school supplies, and technology. A few weeks ago, I requested data from the N.C. Department of Public Instruction related to several categories of expenditures, including Object Code 411, which is the code used to track supply and material expenditures for public schools. (Total expenditures for Object Code 411 are detailed in Table 1 below.)

Although the state tracks aggregate spending on supplies and materials, the nature of those expenditures is not known. Object Code 411 includes a number of different items. According to a publication of the N.C. Department of Public Instruction, it includes

One would assume that most expenditures logged under this code were for conventional school supplies, workbooks, and online instructional resources, but it is not possible to disaggregate these expenditures with the data collected by the state education agency. 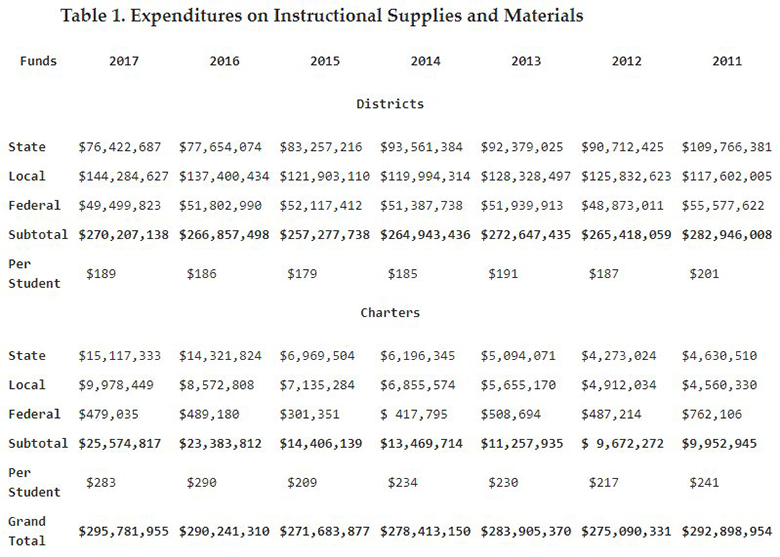 It is important to note that these figures do not necessarily represent the amount budgeted by elected officials in a given year. That is because state law permits districts to transfer state funds to and from their allotment for instructional materials and supplies. The transfer of local and federal funds varies according to the rules established by the funder, but it is safe to assume that school districts and charter schools use their budgetary flexibility in ways that affect funding for school supplies.

Charter school spending on materials and supplies was a different story. State expenditures surged by 226 percent, local spending rose by 119 percent, and federal spending dropped by 37 percent. State and local spending trends were consistent with the rapid increase in charter enrollment since 2011. The elimination of the 100-school cap on charters and more generous enrollment allowances began the process of relieving pent-up parental demand. As a result, charter enrollment jumped from over 41,000 to well over 90,000.

The question of whether these expenditures, as well as funds spent by parents and teachers, are sufficient cannot be answered through a casual examination of data. (Despite their complaints to the contrary, educator responses to the 2018 Teacher Working Conditions Survey suggest that they are.) Nevertheless, a clear understanding of how much is spent by all stakeholders is the first step in ensuring that public schools have the instructional supplies and materials that they need to be successful in the classroom.