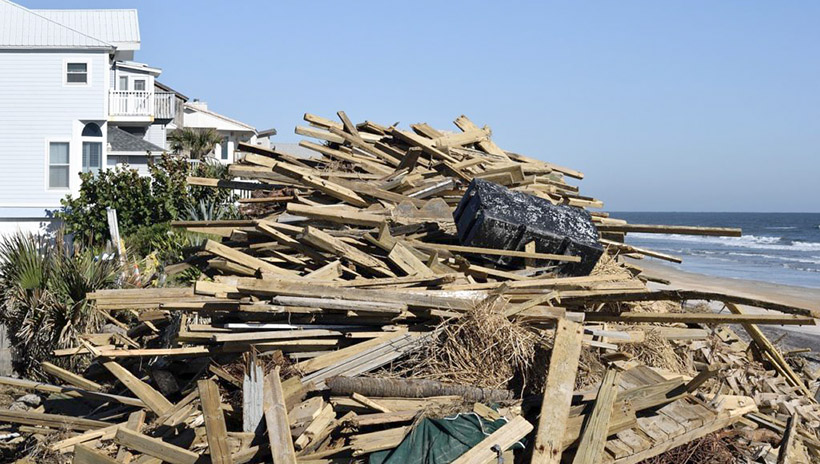 But one hopes that the bickering does not overshadow one clear fact: Bureaucratic inertia and perverse incentives plague portions of the federal government's disaster recovery system. A brief statement last week from Cooper's Office of Recovery and Resiliency demonstrated that point.

"These things come so quickly and are so disastrous," said Rep. Craig Horn, R-Union, of Hurricane Matthew. "It takes us so long to help folks that are in immediate need. It's a crying shame."

By the time Horn uttered those words May 20, he and other members of a legislative oversight group had spent about an hour dissecting the state's response to the 2016 hurricane.

They focused particularly on a report from the General Assembly's Program Evaluation Division. That report cited "administrative missteps" and a "lack of expertise." It labeled $3.7 million in state hurricane recovery spending "unnecessary." Based on the findings, program evaluators recommended a series of changes at the state Department of Public Safety and its relatively new recovery office.

Lawmakers took no votes. But Horn's comments spoke for many of his colleagues. "It's just very frustrating," he said. "If you're in a home that's devastated, you've lost everything. And it seems like everybody's spinning their wheels, and nothing's happening. And you're stuck."

Laura Hogshead has served as chief operating officer at the Office of Recovery and Resiliency since January. She spelled out the Cooper administration's response to the legislative report.

Of course Hogshead's comments placed the facts in the most favorable light for Cooper's hurricane response team. Legislators have legitimate reasons to question Cooper staffers' effectiveness.

But only the most hardened partisan would fail to see that some of her statements raise serious questions about the federal government's role in disaster recovery.

First, Hogshead reminded lawmakers about the basic structure of the federal Community Development Block Grant program for disaster recovery, or CDBG-DR. The feds granted North Carolina $236.5 million under that program. (The federal government chipped in a total of $914 million for housing and infrastructure assistance linked to Hurricane Matthew.)

That's why Hogshead disputes criticism that the state waited 515 days after the hurricane's landfall to award a contract for administering the grant. "The first 311 days, the state had no ability to pull on those funds," she said. The state Commerce Department spent months jumping through federal hoops. After roughly 10 months, the agency finally acquired the federal certification it needed to qualify for a grant.

Because North Carolina had not been granted similar funding since Hurricane Isabel in 2003, "there was no institutional knowledge left in the state to spend those funds," Hogshead said. That's a problem when it comes to a complex program like CDBG-DR, she said.

"It is subject to 80 cross-cutting federal regulations and 50 [U.S. Department of Housing and Urban Development] guidance documents," Hogshead explained. "It is not codified in statute. ... CDBG-DR changes slightly with each disaster."

Hogshead has worked with the program since Hurricane Katrina slammed Louisiana in 2005. "The Appropriations Committee appropriates the funding," she said. "HUD puts out a federal register notice. The rules change just a little bit. Every disaster changes the flavor of the funding. So you have to wait for that federal register notice to tell you how to spend that funding."

So what about the legislative report's finding that North Carolina is a "slow spender" of federal grants? State government had spent just $2.6 million, or 1%, of its grant by December 2018, more than two years after the storm.

That same "slow spender" designation covers 65 percent of all state grantees, Hogshead responded. "It is virtually impossible to stand up a staff and spend these funds within the first year of receiving them," she said. As an aside, she noted that spending has now climbed to 4% of the total grant.

The legislature would be wise to push Hogshead and her colleagues. It would be nice to learn what it will take for North Carolina to join the 35 percent of grantees who avoid the dubious "slow spender" label. But even with improvement at the state government level, the scenario Hogshead describes remains troubling.

A permanent, cabinet-level state agency had to work for months to become eligible for a federal grant? The grant program changes from disaster to disaster, subject to dozens of regulations and dozens more pieces of federal guidance? No one knows how the grant program will work without understanding the federal budget process first?

This is not a recipe for efficient, effective government response to a natural disaster.

Just as troubling was Hogshead's reply to the charge of $3.7 million in "unnecessary" spending. "That money was not misspent," she explained.

It paid for intake centers that helped hurricane survivors. "That is where we crossed an invisible line we didn't know was there," Hogshead said. "Because we didn't have any experience with CDBG-DR since 2003, we didn't realize we had crossed a line."

Only when HUD staffers arrived on the scene did the state learn that the feds would not pay for intake centers. If the state had decided to delay a short-term emergency service, officials might have been able to shift the cost to Washington, D.C.

Talk about a perverse incentive to do nothing until the feds say OK.

Lawmakers and the Cooper administration are likely to haggle in the coming months over lessons learned from Hurricane Matthew. They will debate the proper staffing levels for Hogshead's office. They might squabble over funding for future hurricane preparations. They'll play the blame game.

But this observer hopes Hogshead's comments prompt a larger discussion. The federal government's rules and timelines seem poorly suited for the demands of a state dealing with a hurricane's immediate aftermath.