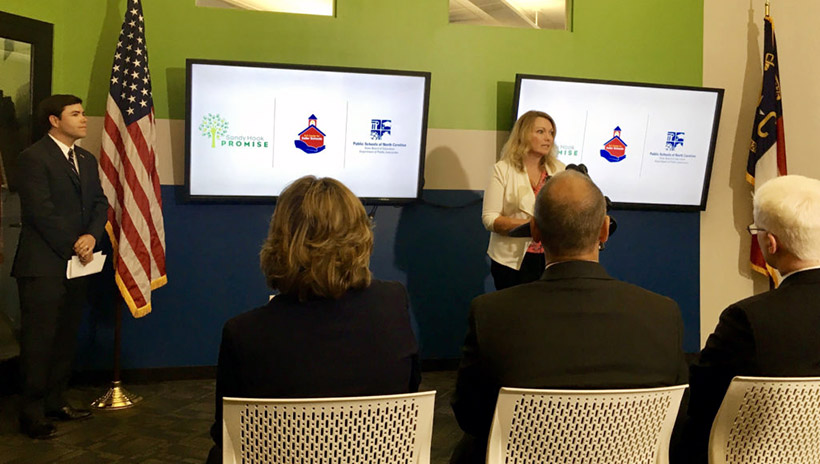 Starting with the 2019-20 school year, all North Carolina public middle and high schools will be able to use the Say Something Anonymous Reporting System to alert school administrators or law enforcement of threats.

Sandy Hook Promise, which created the program, is a national nonprofit organization founded by family members who lost loved ones in the 2012 Sandy Hook Elementary school shooting in Newtown, Connecticut. The organization works to prevent violence and victimization in schools by providing students and teachers tools to identify and report warning signs.

"The Say Something Anonymous Reporting System that is going to be available to all middle schoolers and high schoolers throughout the state gives kids the power to look after themselves and for each other," Nicole Hockley, co-founder and Managing Director of Sandy Hook Promise, said.

Hockley is the mother of Dylan, who was killed in the Sandy Hook Elementary School tragedy.

"This is not just about school shootings," Hockley said. The app also will help prevent bullying, cutting, suicide attempts, sexual abuse, dating violence, and drug abuse. "It's a wide spectrum of at-risk behavior that students will be trained in what to look for and how to call 911, tell a trusted adult, or use the anonymous reporting system."

Students, teachers, school staff, and parents can share safety concerns through the anonymous app with school administrators and school resource officers. A website and a telephone crisis hotline are also available through the program.

When a tip is sent through the website, phone hotline, or app, a crisis center counselor will determine the severity of the threat, categorize it, and deliver tip information to relevant parties. With imminent threats, crisis counselors will contact local 911 dispatchers to address the problem.

North Carolina will be the second statewide partnership for Sandy Hook Promise. Pennsylvania started using the anonymous reporting system in January. More than 5,100 schools across the country are using the program.

"This will come with training starting over the summer to help schools and staff to work with Sandy Hook Promise to catch the signs before one student's issues may become a school tragedy," Johnson said.

A central command center will be built over the summer where all the tips from the Say Something app will go to. Every public middle and high school in the state will be incorporated into the program. The cost of the project will be about $650,000 a year.

The General Assembly has already provided funding for the project. Money was set aside for a variety of school safety initiatives after the House Select Committee on School Safety came forward with a list of recommendations. One of those recommendations, championed by Rep. Donna White, R-Johnston, was to fund an anonymous mobile tip app. Five million dollars was set aside in the 2018-19 budget bill to pay for the application.

In 2015 and 2016, the North Carolina Center for Safer Schools piloted an anonymous mobile tip line in a few counties. While most tips dealt with bullying, threats, and drugs, the center also received tips relating to weapons, fighting, and underage drinking.

White said the vendor used for the pilot didn't meet the requirements to operate a statewide program serving more than 1,000 schools, including a 24 hour command center. While the state is using a different vendor, White said officials still learned from the pilot program and will use that knowledge with the new program.

"The anonymous tip app is the one thing we can do that is tangible and would not take years to develop and implement," White said.
Go Back