Cooper Signs Bill Letting Craft Brewers Distribute More of Their Own Beer | Beaufort County Now | Gov. Roy Cooper on Thursday, May 30, signed into law House Bill 363, the Craft Beer Distribution and Modernization Act, the result of a compromise among mid-sized craft brewers and the N.C. Beer and Wine Wholesalers Association. 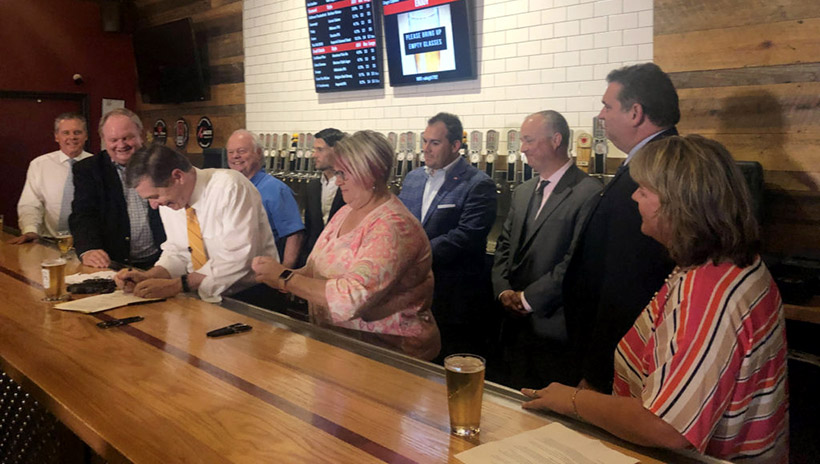 It was only appropriate.

Gov. Roy Cooper on Thursday, May 30, signed into law House Bill 363, the Craft Beer Distribution and Modernization Act, the result of a compromise among mid-sized craft brewers and the N.C. Beer and Wine Wholesalers Association.

"It's with a little trepidation that I sign a bill behind a bar," Gov. Roy Cooper joked before signing the measure, an important legislative move allowing the state's craft brewers to grow and prosper.

Cooper, with his back to the taps at Raleigh Brewing Co., was surrounded by a group of smiling brewers, legislators, and distributors as he signed the measure.

"We all know the beer industry is important to N.C.'s economy," Cooper said. "We know it represents hundreds of thousands of jobs for our state and tens of millions of dollars in investment."

That new law maintains the current three-tier system - producers, wholesalers, and retailers - and adds a new, mid-level classification of brewers to state law. Brewers, under the proposal, could self-distribute 50,000 barrels of their products, as opposed to the current 25,000. The legislation also gives growing brewers more flexibility in choosing where and how to distribute their beers around the state.

Breweries that exceed 50,000 would not lose the ability to self-distribute, although the new law would affect only those breweries that sell fewer than 100,000 barrels of beer per year. Now, if a brewer sells 25,001 barrels per year, by state law, every barrel produced - including the first - must go through a third-party wholesaler/distributor.

In a joint statement after the Senate passage, Tim Kent, executive director of the N.C. Beer and Wine Wholesalers Association, and Suzie Ford, a founder of NoDa Brewing Co. in Charlotte, says H.B. 363 is a collective win for all parties involved.

"The overwhelming majority support of the passage of the Craft Beer Distribution & Modernization Act is an important step forward for the beer industry adding to existing opportunities for brewers in North Carolina," the statement says. "H.B. 363 provides greatly-expanded legislative support for the state's beer franchise law and the three-tier system. As North Carolina's breweries continue to grow, we welcome today's regulatory achievement."
Go Back