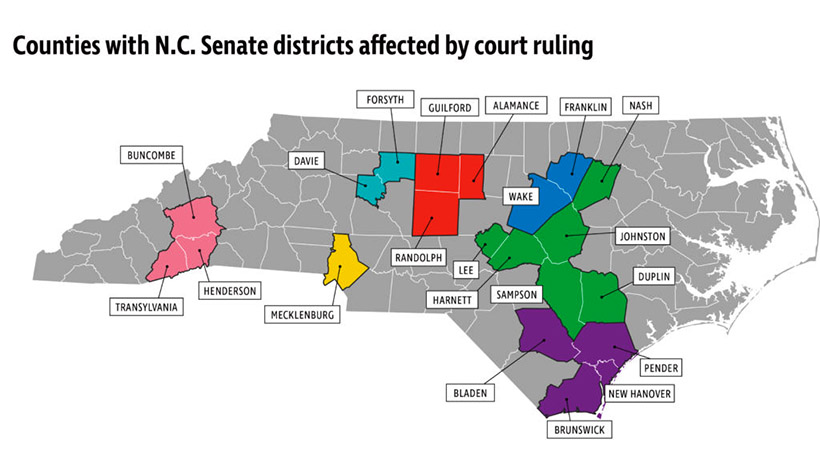 The court order says legislators "are permanently enjoined from preparing for or administering the 2020 primary and general elections" for districts in the affected counties. For the N.C. House, the order lists 28 counties in 14 "groupings." (Previous court rulings require the General Assembly to group counties together when a legislative district cannot be contained within a single county.) The map "Counties with N.C. House districts affected by court ruling" displays the affected counties. They are grouped together as spelled out in the order.

For the N.C. Senate, the ruling affects 21 counties in seven groupings. The maps "Counties with N.C. Senate districts affected by court ruling" displays the affected counties. They are grouped together as spelled out in the order.

Not every district in the affected counties will change. In the House, judges have ordered legislators not to redraw Districts 57, 61, or 62 in Guilford County. In addition, lawmakers "shall not alter" portions of District 59 affected by an earlier federal court case. Judges also banned redrawing of House District 66 in the Cabarrus-Davie-Montgomery-Richmond-Rowan-Stanly county grouping.

On the Senate side, judges have ordered lawmakers not to redraw Districts 24 and 28 in the Alamance-Guilford-Randolph county grouping. Legislators also must refrain from changing any portions of District 27 affected by a previous federal court ruling.

The three-judge panel has ordered new maps completed by Sept. 18. House and Senate redistricting committees are scheduled to meet Monday, Sept. 9.
Go Back