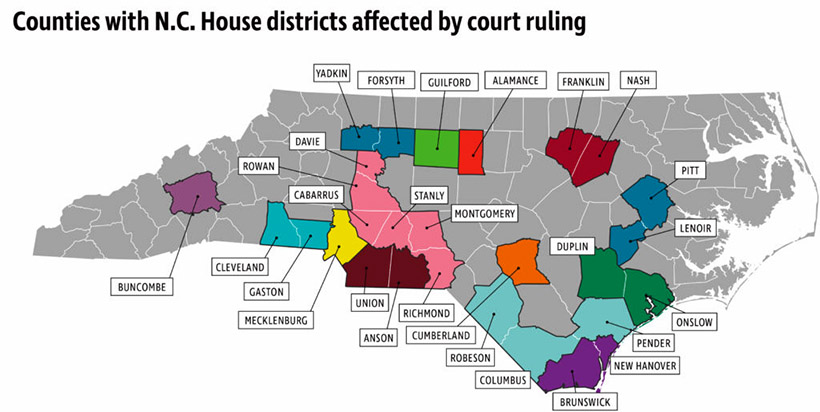 With 2020 primaries quickly approaching, the State Board of Elections says it will need contested election maps by early December.

In early September, the three-judge panel in Common Cause v. Lewis ordered the General Assembly to draw new maps for the state's 2020 elections, after ruling several of the districts unconstitutional partisan gerrymanders. The General Assembly submitted the maps two weeks later.

As the parties wait for the court's decision, potential candidates do, too. The statewide primary election is March 3. Candidate filing for all races in the 2020 election is set for Dec. 2 - Dec. 20.

But if the court rejects the maps lawmakers submitted, filing for legislative races may be delayed. By law, absentee ballots must be distributed 50 days before an election, or 45 days if the board approves the delay or a court challenge remains unresolved.

By the court's request, the State Board - a defendant in the lawsuit - said it needs the new maps between Dec. 2 and Dec. 10 to avoid delaying the primary. If the maps aren't ready then, the board, or the court, could trigger the 45-day deadline by getting the maps between Dec. 7 and Dec. 15.

The board said it could take as many as 21 days to realign the districts before it prepares absentee ballots.

The court could order a separate primary for only the legislative districts it ruled illegitimate, the board said. Should the court take that route, the elections board would need between 63 and 71 days beginning March 14 to prepare for early voting.

If the court handles the contested districts separately, the board suggested the court pair those primaries with any unresolved March primaries from other races.
Go Back