On Thursday October 24 at 6:30 PM, the Beaufort County Republican Executive Committee will nominate the person to fill the unexpired term of Gary Brinn. This meeting will be held at the Agriculture Building at the Washington Airport. The meeting is open to the public. Conservative Republicans should attend. I am sure it will be entertaining.

The character and political views of the person selected will tell a lot about the Beaufort County Republican Party. How Conservative are the yellow sheet Republicans. Ideally the person selected should be a candidate in the 2020 elections. Already, Frankie Waters is running a campaign to retread two liberal Republicans. They are Jay McRoy and Bonald Buzzeo. "Zip Code Waters", also known as "Fake Frankie" is using his standard campaign argument. He says geography is more important than political beliefs. He should know, because almost all of his votes have been with the Democrats. While Brinn recently voted conservative, he was always available to trade a vote with Waters when needed. Waters sees an opportunity to make the Board of Commissioners even more liberal.

A great truth was told accidentally in the Washington Daily News when Gary Brinn's death was announced. I have attached a copy of the article with Ed Booth's statement. That truth has to do with Gary Brinn and his self serving deal making. He made a deal the Democrats before he was elected to office.

Many of the less informed and liberal Republicans are upset with me for not voting for Brinn to be Chairman about 3 years ago. I did not vote for Brinn because he made the statement directly to me "I will never vote for you to be anything". He made this statement with a week of his election to office. Within a few days Brinn (the supposed Republican) had made a deal with Jerry Langley and Ed Booth for Brinn to be the Chairman and Langley to be the Vice Chairman. Yellow sheet Republicans, please explain why I as a conservative Republican should support anyone who behaved like Brinn.

I am fearful that Waters, Evans and the rest of the yellow sheet Republicans will appoint another liberal deal maker and the Democrats will continue to run Beaufort County Government. Even with a majority of five Republicans and only two Democrats.

The presently sitting Executive Committee has an opportunity to begin to heal the wounds of a split party or to continue the fight between the conservative Republicans and the liberal Republicans. They will be judged accordingly.


Here below is an image file of a Washington Daily News article regarding Commissioner Brinn, submitted to BCN by Contributor Hood Richardson.     Click image to expand. 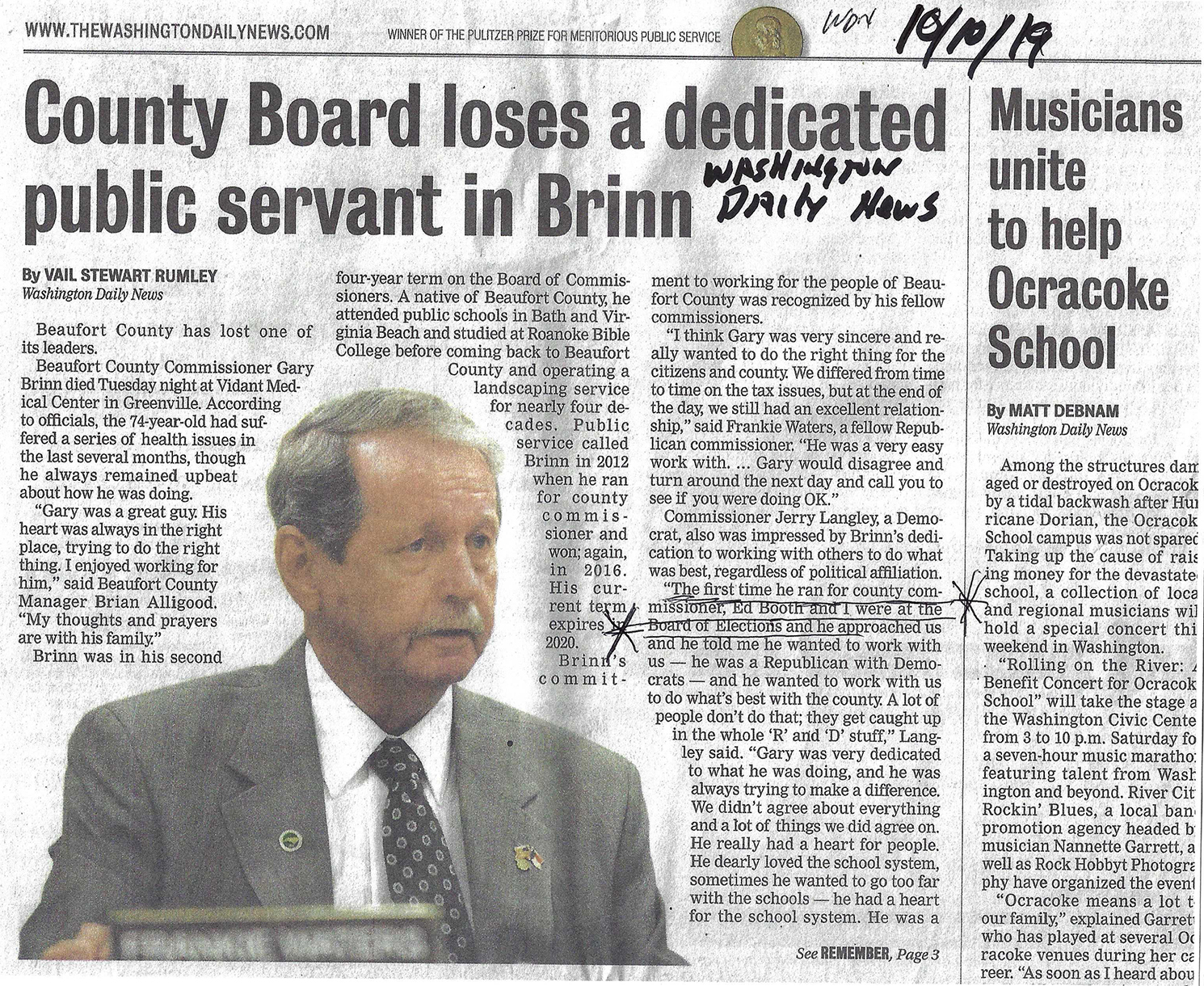