ECU Opens Homestand Against Coppin State | Eastern North Carolina Now | After playing six of its eight games in November outside the comforts of Williams Arena at Minges Coliseum, the Pirates tip-off December with a long awaited five-game homestand beginning Tuesday night as they host Coppin State at 7 p.m. 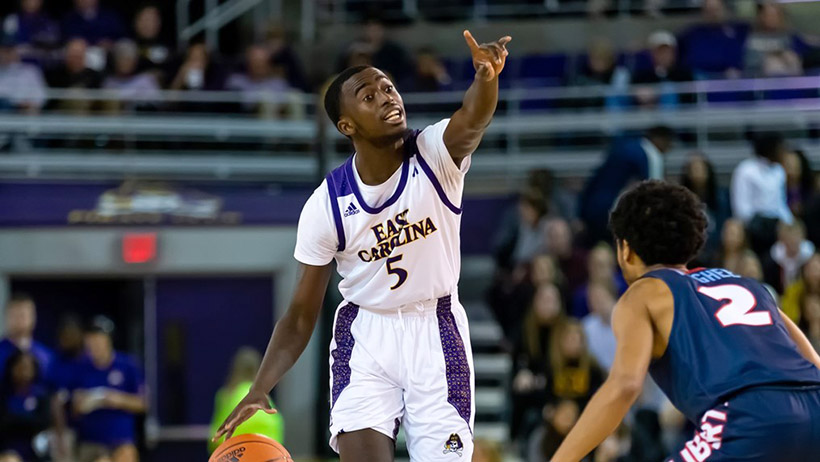 After playing six of its eight games in November outside the comforts of Williams Arena at Minges Coliseum, the Pirates tip-off December with a long awaited five-game homestand beginning Tuesday night as they host Coppin State at 7 p.m.

East Carolina will not play another road game until it opens American Athletic Conference play at Wichita State on Jan. 1, 2020.

"A core of the season is already gone," Pirate head coach Joe Dooley said. "We've already played eight games. The good news is that we've got a lot of room for improvement, but there needs to be an urgency every day in practice.

"We're trying to build something here. I think we need to play with a little more urgency, but I do think that these guys are starting to learn some things the hard way; sometimes it's a good way, sometimes it's a bad way to learn."

ECU is currently mired in its third three-game losing streak of the season following a 99-89 loss at James Madison Saturday. However, the Pirates played arguably their best offensive game of the season, setting season-highs for points, 3-point field goals made (13) and 3-point field goal percentage (.481) and assists (18).

"Coach told us right after the game, that the stats we put offensively up were enough to win 99.9 percent of the time," sophomore forward Jayden Gardner said. "But we've got to be able to guard people."

Robinson-White missed the first seven games due to injury, while Jackson suited up for just the fourth time as he was sideline for the first for games.

"It's been awhile for Tremont to play with a lot of us and we haven't had that five together a lot, so we're going to be doing a lot of work in December," Gardner said.

After posting back-to-back wins over Cornell and James Madison, Coppin State fell 69-62 at Montana on Friday.

The Eagles are averaging more than 30 3-point attempts per game and rank second in Division I with 275 total attempts outside the arc. CSU shot 35 percent or better from beyond the arc in it three wins, while it shot under 30 percent it each of its six losses.

"We need to guard the [3-point] line," Dooley said. "These guys are putting their heads down and driving it; their drive forces help, which creates 3-point opportunities. They can get on a roll and we can't let that happen."

Twin brothers Andrew and Aaron Robinson are the Eagles' top two 3-point shooters, hitting at a 34.0 and 31.6 percent clip, respectively. Kamar McKnight is their leading scorer with 14.9 points per game, followed by Dejuan Clayton (13.6 ppg) and Andrew Robinson (12.8 ppg).

Clayton ranks eighth in the nation with 21 steals, while McKnight and the Robinson twins each rank among the top 100 in 3-point attempts.

Series Note - This will be just the second meeting between ECU and Coppin State. The Pirates opened the 2017-18 campaign with a 76-50 victory over the Eagles.
Go Back