The Blind Side | Beaufort County Now | Touching film full of life lessons, with more than its share of unforced humor, "The Blind Side" was easily one of the best films of 2009. 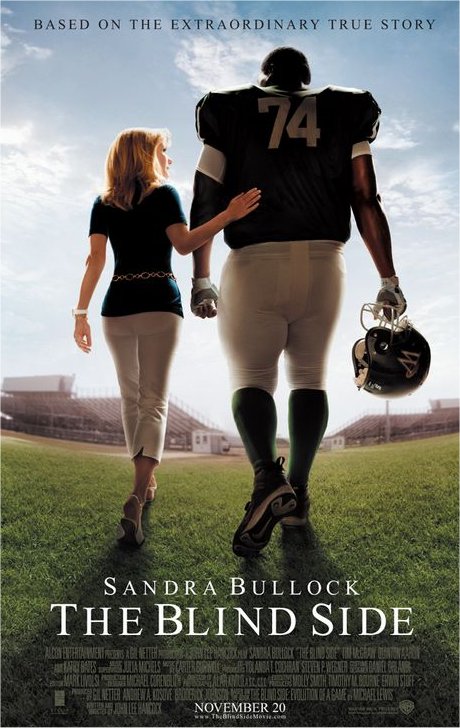 story of one young man - Michael Oher. Michael Oher was a large bodied, athletic, young black man, with the sweet spirit of an untainted child, who received an athletic scholarship to attend Wingate (actually the private school is known as Briarcrest in Memphis circles) Christian School.

Wingate was a private school for all grades that were attended by not only the man-child Michael Oher, but by Leigh Anne and husband, Sean Tuohy’s children as well. It was only a matter of time before Mrs. Touhy would be introduced to the vision of a short-sleeved Michael walking home to the “wrong side of town” on a cold autumn night. While Leigh Anne did not seem like the kind of woman, who would pick up stray cats to take home and feed, she, conversely, would never allow this huge man-child to shiver all the way back to his dilapidated home in his impoverished neighborhood.

Similar to that stray cat theory, Leigh Anne discovered every reason to keep Michael in her domicile, but primarily, her greatest purpose for continuing as Michael’s ward was her Christian conscience, and for her growing affection for him. Why would Leigh Anne take such a risk by bringing such a large adolescent male into her young family? Simply, she was extremely intuitive as to who Michael was, and who he could be. She was savvy, she was smart, and she was determined. Thankfully for Michael, he did not waste this opportunity. This is the other side of this compelling tale.

Michael Oher, played by behemoth, relative newcomer Quinton Aaron, was a diamond-in-the-rough as a human entity. He was big, strong, and, surprisingly, mild tempered. He was also tested as borderline mentally challenged, and without a modicum of decent grades, he would not play football for his one, and only, full year at Wingate Christian School. Michael sensed that this would be his one chance out of his impoverished life, and, with the help of Leigh Anne Tuohy and her good family, he was determined to make the transition. 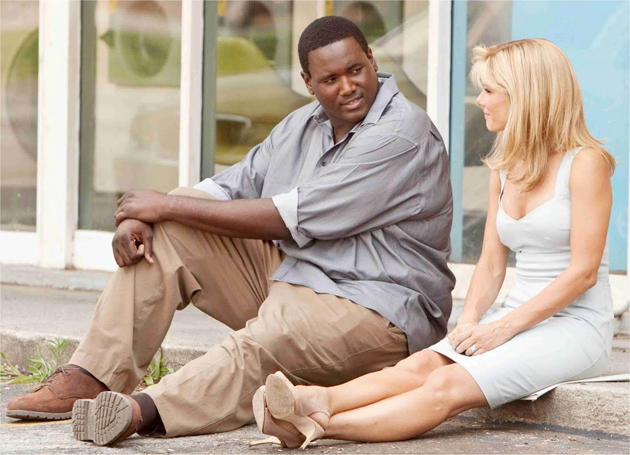 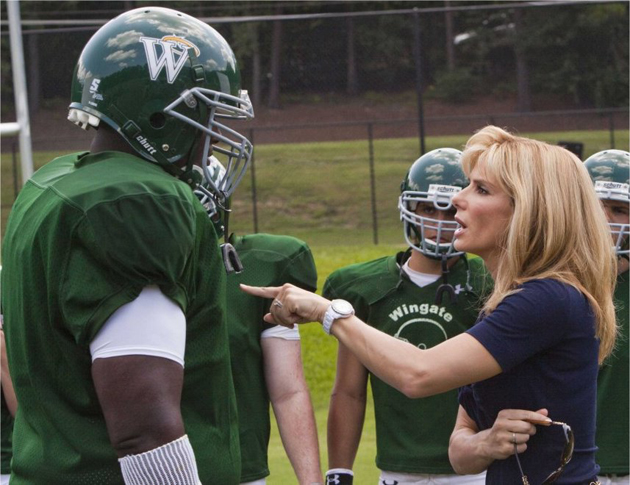 That transition into a purposeful student was made possible by Leigh Anne and Michael’s teachers discovered that Michael could learn if they would spend additional time with him to read to him the lesson. The tutoring was integral to Michael learning to make the grade as a student. Before the direct instructor involvement, Michael never had a chance. This is best exemplified by the verse written by Michael and found by one of his teachers, which was Michael’s way of crying out:

Teacher: "I look and I see white everywhere. White walls, white floors and a lot of white people. The teachers do not know, I have no idea of anything they are talking about. I do not want to listen to anyone especially the teachers. They are giving homework and expecting me to do the problems on my own. I have never done homework in my life. I go to the bathroom and look in the mirror and say ‘this is not Michael Oher.’” 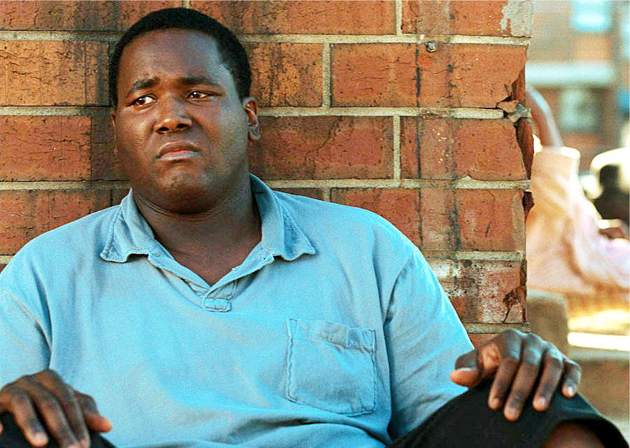 These few poignant words well defined the extent of who Michael thought he was at this point in his young life. Before Leigh Anne and the dedicated instructors of Wingate (Briarcrest) Christian School were finished with Michael, he well understood that the expansion of his human potential was his ticket to a enriched, more purposeful life, whether it originate from his first brush with a real education or football. While his education was most important to his maturation, it was his behemoth potential to excel at football that was his natural path to a purposeful life.

Michael making the transition to that purpose of a successful high school football player was, again, made possible by Leigh Anne, who discovered that Michael scored 98% on the test that scored his level of protective instincts. Considering Michael’s exceeding gentle nature, he was misallocated at the position of defensive lineman by football coach, Burt Cotton, played by Adel, Georgia native Ray Mckinnon. Michael just did not possess the aggressive nature to excel in that position. Leigh Anne, however, understood that Michael’s outstanding protective instincts would serve him as a functional asset on the offensive line, where he could protect the quarterback.

Michael was a rising senior and had never played 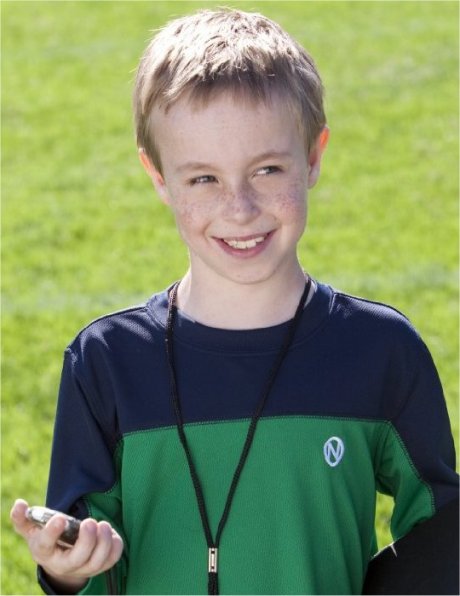 football, outside of the school’s preceding spring practice, and he just wasn’t ready to step up his game to the point that he would make a difference for the team, and for himself. Enter S.J. Touhy, the family’s spastic toothed son: About ¼ the size of Michael. S.J. spent the summer training the fine natured Michael, which made some expressively humorous moments in the film. If the mountainous Michael needed inspiration, the mercurial S. J., played by Jae Head, would be his muse. It paid off.

In Wingate’s first game, Michael shook off his first-game-jitters, and found the inspiration to lead his team to victory. How?

A touchdown scored on an open field run, where the running back was hardly touched because of Michael. The last defensive player, who was also verbally abusive to Michael, was pushed down the field over 20 yards and through the end zone. When queried by an astonished Coach Cotton, Michael explained:

Michael Oher: “Sorry, Coach. I stopped when I heard the whistle.”
Coach Cotton: “Where were you taking him?”
Michael Oher: “The bus. It was time for him to go home.” 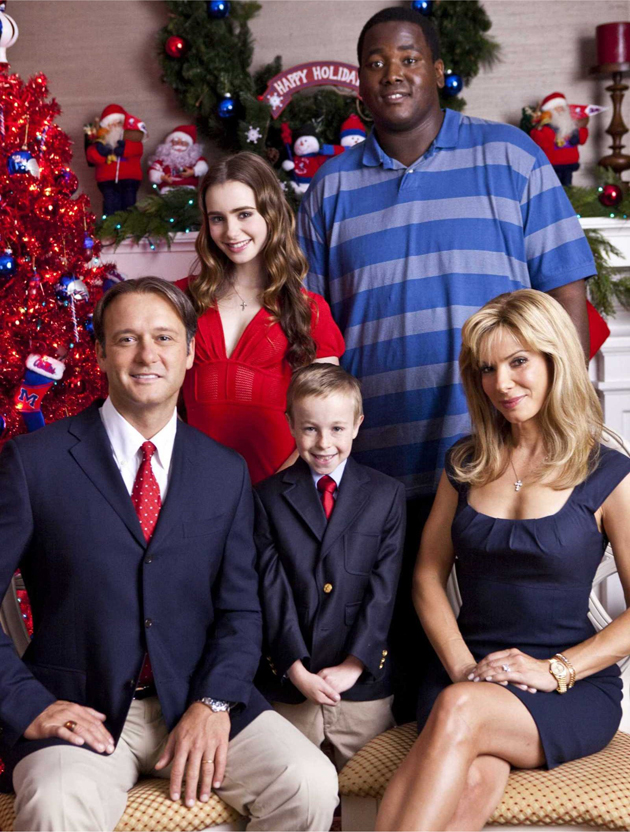 In real life, Michael Oher went on to play college football for Tuohy’s alma mater, the University of 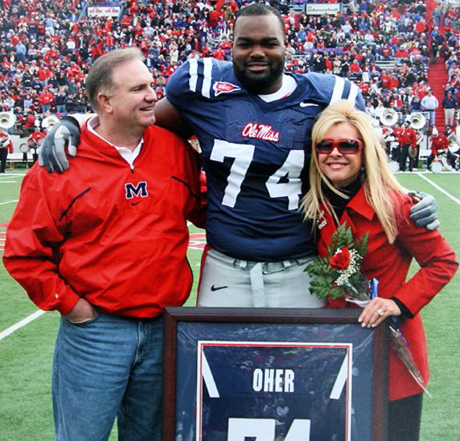 Mississippi (Ole Miss) - was an All American. He was drafted, in the first round, to play in the NFL for the Baltimore Ravens at left tackle. The new necessity of the whole left tackle approach to protecting the quarterback is explained in the voice of Sandra Bullock, who deservingly won the Oscar for her role as Leigh Anne Tuohy, as there rolled the classic football excerpt / lowlight of Quarterback Joe Theisman’s leg snapping like a twig under the awesome power of Linebacker Lawrence Taylor giant hit, ending his career:

“Now, y'all would guess that more often than not, the highest paid player on an NFL team is the quarterback. And you'd be right. What you probably don't know is that more often than not, the second highest paid player is, thanks to Lawrence Taylor, a left tackle. Because, as every housewife knows, the first check you write is for the mortgage, and the second is for the insurance. The left tackle's job is to protect the quarterback from what he can't see coming. To protect his blind side.”

This is how this story actually began as an explanation of the truism that professional football now understands after the horrific Joe Theisman injury is that right handed quarterbacks have left biased blind side. Director John Lee Hancock wrote the screenplay of the Michael Lewis book, who used the colorful, heartwarming story of Michael Oher to support the revelation that a left tackle must be capable of protecting the quarterback’s blind side. 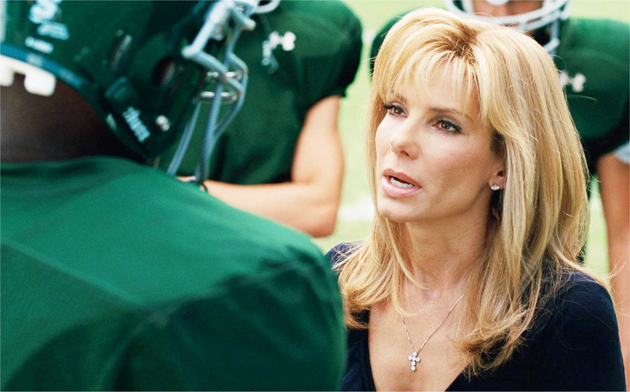 What is an outstanding premise for protecting the game’s most important player is an equally fine film. The acting is justifiably good and Sandra Bullock’s quiet intensity as the smart, strong willed Southerner, Leigh Anne Tuohy easily qualified her as this year’s top acting credit. Tim McGraw used his understated role as the affable Sean Tuohy to well support Ms. Bullock’s role of a lifetime. Kathy Bates performs as Miss Sue, employed as a tutor to help Michael to catch him up so he would qualify for a Southeast Conference (SEC) school, announced that she was a Democrat.

Sean Tuohy mused: “Who would've thought we'd have a black son before we met a Democrat?”

Touching film full of lie lessons, with more than its share of unforced humor, “The Blind Side” was easily one of the best films of 2009. At an efficient 128 minutes, the film benefits as the product of a well told tale. The story is so tremendous, you will need one very cold heart to not be moved to the point of reflection, whether one is a football fan or no. I challenge you to see this film and not be moved.