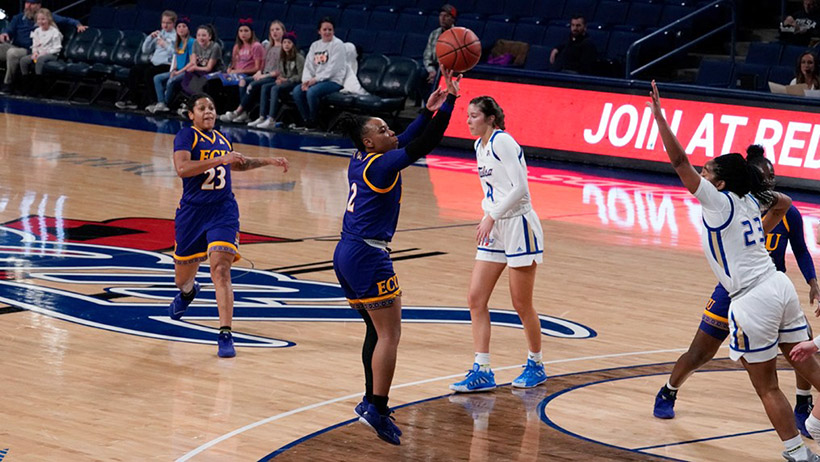 TULSA, OKLA.     A last second shot to tie the game came agonizingly close for the ECU women's basketball team, but the Pirates fell 58-56 to Tulsa on Tuesday night in the Reynolds Center.

"I'm really proud of our team's effort and our grittiness," said head coach Kim McNeill. "25 offensive rebounds, first time I think we've outrebounded a team all year. We are getting better. I can see it and can see our growth as a team. The thing we've got to get better at is playing smart down the stretch and understanding how to play with a lead."

Lashonda Monk led ECU (3-15, 0-5 AAC) with 20 points, including a three-pointer in the final 10 seconds to give ECU a shot at tying the game. Taniyah Thompson got her first collegiate double-double, scoring 16 points and grabbing a career-high 10 rebounds, including eight on the offensive end. Ryann Evans also set a new career-high in rebounding, grabbing eight boards while Xianna Josephs scored a career-best eight points. As a team, ECU outrebounded Tulsa 40-36 and had a 24-15 advantage in turnovers forced.

Tulsa (6-13, 1-5 AAC) was led by Kayla Moutry who finished with 19 points, including 13 in the fourth quarter to go with three blocks. Rebecca Lescay had 16 points while Kendrian Elliott finished with nine points and 14 rebounds. The Golden Hurricane outscored ECU 21-9 in bench points and 14-8 in second chance points.

ECU led 41-39 heading into the fourth quarter and the game stayed tight right until the end. Lescay and Moutry powered an 11-4 run to open the fourth to give Tulsa a 50-45 lead with 6:29 left.

ECU answered right back though. After a Tiara Chambers free throw, the Pirates got a stop and then pulled down four offensive rebounds before Dominique Claytor made a layup. ECU regained the lead on the next possession when Monk sliced through the lane for the layup and was fouled, with the junior guard converting the free throw to give ECU a 51-50 lead.

Moultry and Monk traded baskets, tying the game at 53-53. With the shot clock winding down and under thirty seconds left to play, Moutry hit a jumper to give Tulsa the lead. After an ECU turnover, Moutry made a pair of free throws to push the lead to 57-53 with 15 seconds remaining.

The Pirates got a lifeline when Monk raced down and banked in a triple to cut the lead to just one. Moutry was fouled once again, with just six seconds remaining, but she made just one of two free throws. Evans grabbed the defensive rebound and handed off to Monk who raced down and got a shot up from the right side of the basket.

Unfortunately for ECU, the ball rolled off the rim and out, leaving the Pirates two points short of overtime.

ECU will return home for a battle with No. 3 UConn on Saturday afternoon. Tipoff is scheduled for 1 p.m., inside Minges Coliseum and fans can buy tickets here.