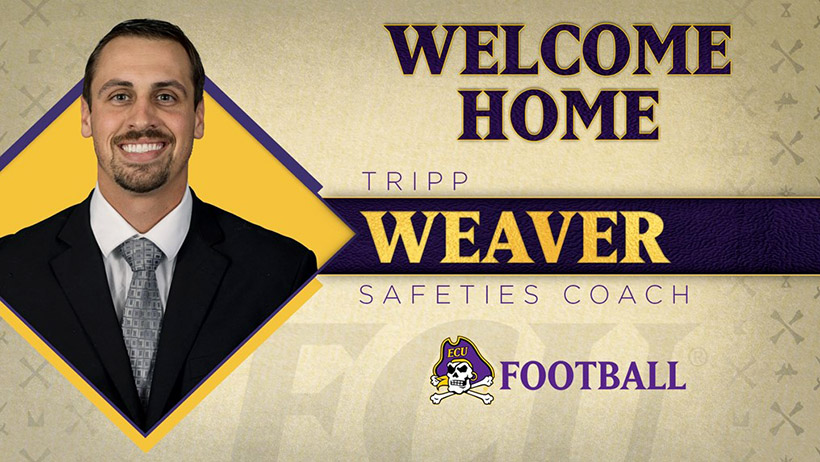 GREENVILLE, N.C.     Tripp Weaver, who helped East Carolina to a conference title and four bowl appearances as a defensive staff assistant before following with six seasons of full-time collegiate coaching experience, has been named the Pirates' safeties coach according to an announcement from head football coach Mike Houston on Friday.

His appointment at ECU comes after earlier championship stops at The Citadel and James Madison, and most recently, a promotion to a defensive coordinator's role after two seasons at Western Carolina.

"It is critical to surround yourself with quality people who not only possess experience, a fundamentally-sound approach and a background of success, but are also passionate and knowledgeable about our culture like Tripp," Houston said. "We are thrilled to welcome back a Pirate whose spirit runs deep and an energy level that is unrivaled."

Under his tutelage, a total of seven secondary performers earned Football Championship Subdivision (FCS) All-America honors, while 11 were selected to various all-conference squads during his time with the Bulldogs, Dukes and Catamounts.

Before being elevated into a unit leadership position at WCU on Jan. 16, Weaver served as defensive backs coach and defensive passing game coordinator in 2018 and 2019. In a span of just two years he spearheaded a significant improvement in the Catamounts' pass defense, standing 17th nationally with a 176.3 yards per game average in 2019 after ranking 108th (261.5 ypg) among all FCS programs a year earlier.

Weaver spent the previous four seasons working on Houston's staffs at The Citadel and James Madison, which resulted in a combined three league titles, two FCS title game appearances and a national championship.

As JMU's cornerbacks coach, special teams assistant and recruiting coordinator in 2016 and 2017, Weaver played a key role in the Dukes' defensive success that fueled back-to-back Colonial Athletic Association championships, successive trips to the FCS finals and one crown. After leading the nation with 21 interceptions and ranking fifth in takeaways with 30 in 2016, James Madison topped the FCS level in four defensive categories - scoring defense (11.1 ppg), interceptions (31), takeaways (44) and pass efficiency defense (83.12) - in 2017.

Of the Dukes' 52 interceptions and 149 pass breakups during Weaver's two-year tenure in Harrisonburg, his cornerbacks accounted for 24 and 72, respectively.

Weaver earned his first full-time position in 2014 when Houston hired him as outside linebackers coach at The Citadel. While in Charleston, he helped the Bulldogs produce a remarkable turnaround that included a 9-4 mark, a Southern Conference co-championship, a 23-22 road win at Southeastern Conference member South Carolina and a second round FCS playoff showing in 2015.

Additionally, The Citadel led the country with a school-record 515 interception return yards and five interceptions for a touchdown in '15. It also topped the SoCon and ranked third nationally with 20 interceptions, the third-highest single-season total in program history, and with 31 turnovers forced. Weaver's group was responsible for 10 of the takeaways, grabbing five picks, forcing three fumbles and recovering two more.

The Asheville, N.C., native began his collegiate coaching career as a defensive student assistant under head coaches Skip Holtz and Ruffin McNeill at East Carolina during the 2009, 2010 and 2011 campaigns. As an undergrad, he was part of a Pirates' program that captured the 2009 Conference USA championship and made postseason appearances at the Liberty Bowl and Military Bowl.

Weaver accepted a graduate assistant's position at ECU in 2012, increasing his responsibilities by working directly with cornerbacks during his initial year before coaching safeties in 2013. The Pirates posted an 18-8 overall record, a 13-3 C-USA ledger and played in a pair of bowls (R&L Carriers, Beef 'O' Brady's) during Weaver's final two seasons at East Carolina.

He helped mentor All-Conference USA selections Adonis Armstrong, Damon Magazu and Chip Thompson, assisted a secondary that picked off a combined 28 passes and was part of a program that knocked off in-state rivals North Carolina and NC State on the road - marking the first-time East Carolina defeated both schools in the same season.

Weaver is married to the former Leigh Hatcher of Asheville, N.C.