Winners of two of its past three games, the ECU women's basketball team will try to keep the forward momentum when the Pirates travel to SMU for a Tuesday night battle. east carolina university, ECU, women's basketball, SMU, gameday, february 11, 2020
Home
Categories
Login

Pirates Prepare for Rematch at SMU 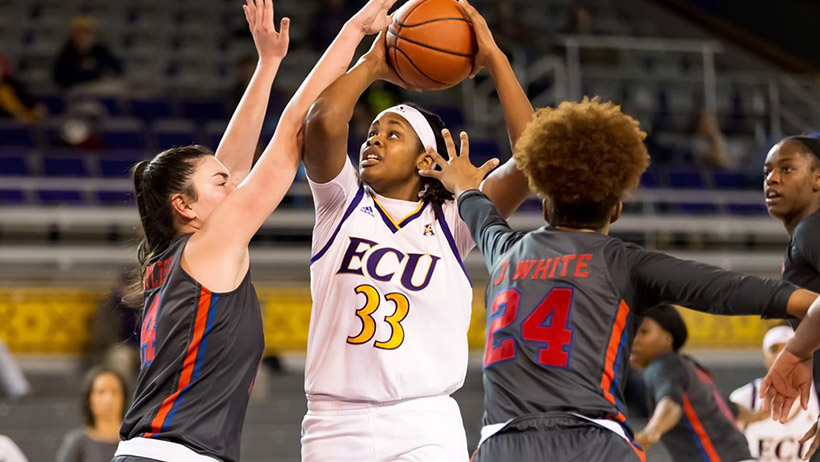 GREENVILLE, N.C.     Winners of two of its past three games, the ECU women's basketball team will try to keep the forward momentum when the Pirates travel to SMU for a Tuesday night battle.

ECU (5-17, 2-7 AAC) looked like it was on the way to a comfortable win against Houston, leading by 10 with 2:33 to go, but the Pirates needed to fight to hang on, as a Tiara Chambers block with a second remaining sealed a 53-50 home win. The Pirates have now won two straight at home, but will be looking to end a nine-game losing streak in road and neutral site games. ECU may have hit on a recipe for success, as the Pirates are now 2-2 when four different players score in double-figures and 3-1 when Dominique Claytor scores in double-figures. Claytor is averaging 6.5 points and a team-high 5.6 rebounds, but those numbers jump to 10.4 points and 6.8 boards in ECU's five wins. Lashonda Monk added 12 points, seven assists and seven steals against the Cougars. Monk is now fourth in the nation in steals per game, averaging 3.91 and needs just 13 steals to tie Toina Coley for the ECU career record. Taniyah Thompson continues to lead all AAC rookies in both scoring (12.7 ppg) and minutes (34.5 mpg) while her classmate, Ryann Evans, is averaging 8.7 points and 5.0 rebounds over the past three games.

SMU (9-13, 3-7) has dropped three straight games, the most recent a 73-58 home loss to Cincinnati. The Mustangs are much better at home than on the road, going 7-7 in Moody Coliseum and 1-6 in road contests, although that one victory came in Minges Coliseum against the Pirates. Johnasia Cash leads the Mustangs in scoring and rebounding, averaging 10.7 points and 9.0 rebounds. Kayla White is the other Mustang scoring in double-figures, averaging 10.4 points. Reagan Bradley has been one of the top rookies in the AAC this season. She is averaging 9.8 points, 5.0 rebounds and 4.5 assists. ECU will need to keep the Mustangs off the offensive glass, as SMU is eighth in the country in offensive rebounds (16.2 per game) and is 32nd in the nation in rebounds per game (41.8). The Pirates will be looking to turn SMU over, as the Mustangs rank 312th in the NCAA in turnovers per game, giving the ball away 19.1 times per game.

It will be the third straight revenge game for the Pirates as ECU fell to SMU 55-47 on January 8. After SMU led by two at halftime, the Mustangs outscored ECU 15-10 in the third quarter and held on in the fourth quarter. Monk led ECU with 23 points and eight rebounds, but was the only Pirate to score in double-figures. Kayla White shot 7-of-10 for SMU and had 18 points. The Pirates forced 27 SMU turnovers, but were outrebounded 43-27. The win for SMU snapped a five-game winning streak for ECU against the Mustangs and made the all-time series 14-9 in favor of the Pirates. With ECU's win over Houston, the Pirates are 1-1 in revenge games this season and 12-12 since joining the AAC. In regular season rematches, ECU is 24-20 since the start of the 2014-15 campaign.

Tipoff is scheduled for 8 p.m., on Tuesday night inside Moody Coliseum. Fans can stream the game on ESPN3 or follow the live stats HERE.