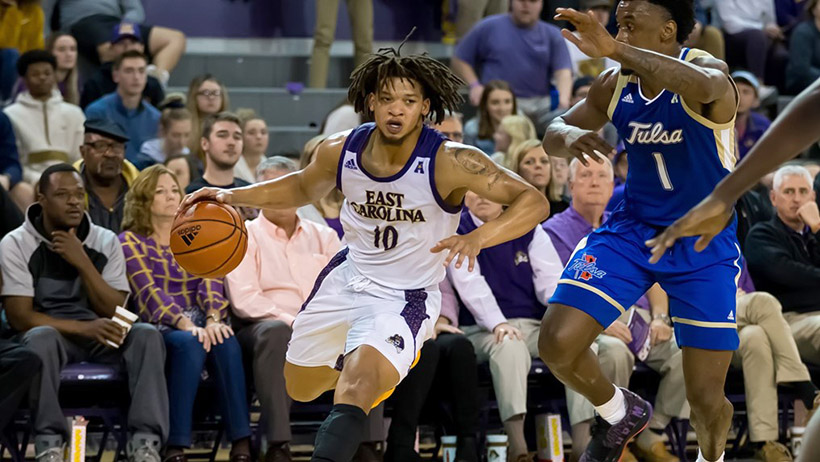 TULSA, Okla.     Fresh off its first road win of the season, East Carolina will close out a two-game road swing at Tulsa on Wednesday night, looking to snap a six-game losing streak to the Golden Hurricane and earn their first win at the Reynolds Center since Daniel Day-Lewis (Best Actor), Jennifer Lawrence (Best Actress) and Argo (Best Picture) shone brightest at the 85th Annual (2013) Academy Awards.

Tulsa defeated the Pirates, 65-49, in Greenville earlier this season as the Golden Hurricane held ECU to just 19 second half points and 21.7 percent shooting after halftime.

"At the end of the first half, we were tied," ECU freshman Tristen Newton said. "So, if we hit some shots, I think we can win."

Pirate sophomore Jayden Gardner had 19 points in the game and grabbed seven rebounds.

Tulsa's Brandon Rachal, who missed Sunday's game at UCF and the second half of the UConn game, led the Golden Hurricane with 21 points, while Jeriah Horne added 14. Six-foot-8 senior Martins Igbanu had 10 rebounds against ECU.

"I think familiarity helps," ECU Head Coach Joe Dooley said. "We went 2-of-26 from 3, so hopefully the law of averages will come back around. They went 3-for-14. So, it was a bad shooting night for both teams. I do think it gives you some help because we have been able to work on some things and we've tweaked a couple of things."

In the last four games, Igbanu is averaging 24.3 points per game, which included a 30-point game Sunday at UCF following a 29-point performance against UConn.

Newton finished with 18 points and a career-high nine rebounds at Tulane on Saturday after dropping a career-best 23 points on UCF on Thursday.

The American's leading scorer, Gardner has the chance to reach a pair of milestones Wednesday night. He needs two points for 1,000 in his career and seven boards for 500 career rebounds. Thirty-one former Pirates have scored over 1,000 career points, while 23 reached to the 500 rebounds plateau.