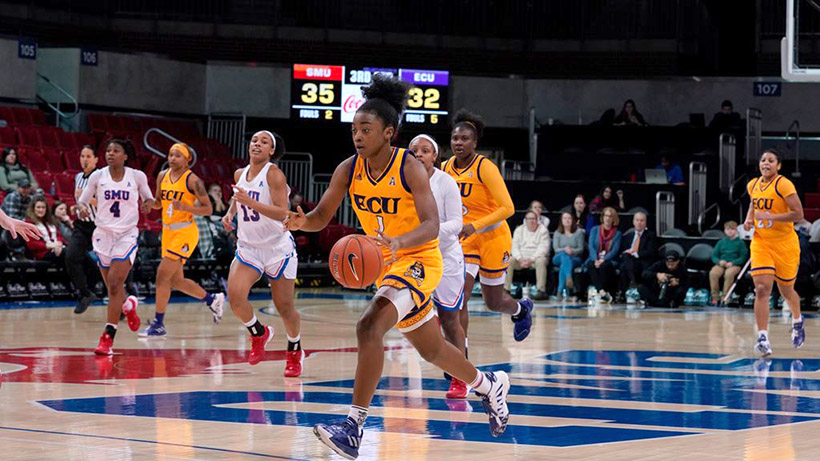 DALLAS, TEXAS     A fourth-quarter scoreless streak was the difference as the ECU women's basketball team fell to SMU 53-45 on Tuesday night in Moody Coliseum.

ECU (5-18, 2-8 AAC) was led by Taniyah Thompson who finished with a game-high 23 points and four steals. Necole Hope was the other Pirates in double-figures, finishing with 10 points and a career-high seven rebounds off the bench. Dominique Claytor scored eight points to go with five assists. ECU's leading scorer Lashonda Monk scored just two points, but pulled down a career-high 12 rebounds.

SMU (10-13, 4-7 AAC) ) was led by Kayla White who had 20 points, the only Mustang to finish in double-figures. Johnasia Cash led the Mustangs with 11 rebounds. Seven different SMU players scored at least four points.

Thompson was aggressive on the offensive end as soon as the whistle blew. The AAC's leading rookie scorer had ECU's first five points and 12 of the first 14 as ECU built early leads of 7-0 and 14-4. SMU answered, mostly through White who had six of SMU's points during an 8-0 run. Hope and Thompson each had baskets in the final minute of the first period to put ECU up 18-15 after one. Thompson had 14 points in the opening frame while Hope had the other four.

In the second, Thompson cooled off which slowed down the ECU offense. Claytor picked up some of the slack, scoring six points in the frame. However, other than Claytor's six, Thompson had the only other two Pirate points. White was again able to hit for the Mustangs, scoring seven of SMU's 13 points in the second. That allowed the Mustangs to take a 28-26 lead into halftime.

SMU started the third quarter on a 6-2 run, capped by a White triple, to extend its lead to 34-28. It was again up to Thompson and Hope to drag ECU back into the game. The pair scored on back-to-back possessions to stymie SMU's momentum. SMU got the lead back to four before Thompson and Hope again went on a run. First, Thompson got a steal and was able to turn it into a layup. After an ECU defensive stop, Hope bagged a triple from the left wing to put the Pirates up 38-37. The lead lasted less than a minute though, as the Mustangs got the final two points of the quarter and led 39-38 after three periods.

ECU regained the lead to open the fourth quarter when Claytor scored a layup, but then came the dagger run from the Mustangs. The Pirates scored just one point, a Hope free throw, over the next six minutes. During that span, SMU went on a 9-1 run to take a 48-41 lead with 3:50 to go. Thompson made a layup to end the run, but SMU made five free throws down the stretch to make sure ECU never got closer than five.

ECU will be back on the road on Saturday afternoon when they head to Memphis. Tipoff is slated for 3 p.m., at Elma Roane Fieldhouse.
Go Back