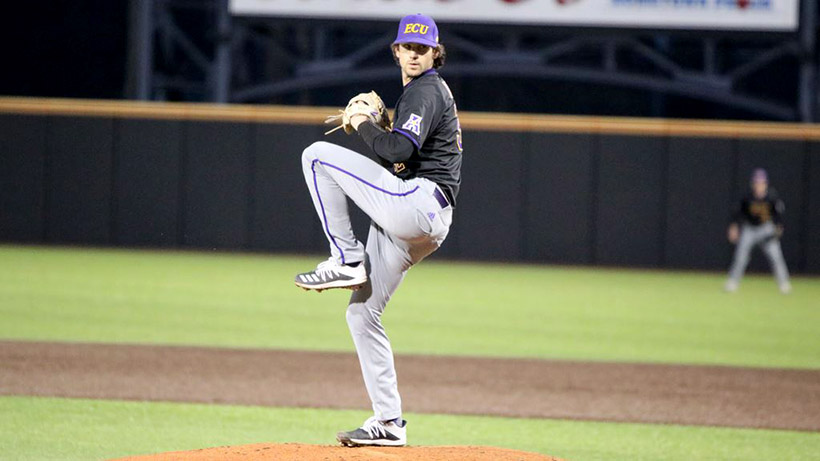 BUIES CREEK, N.C.     Zach Williams collected a pair of hits and drove in three runs, while Zach Adams tossed four scoreless frames with six strikeouts leading Campbell to a 7-2 win over No. 16 East Carolina Wednesday night at Jim Perry Stadium. With the win the Camels even their record to 2-2, while the Pirates drop to 3-1.

Campbell jumped out to an early 1-0 lead in the bottom of the first and never looked back. Waldy Arias singled to left field to start the game then moved to over to second on a Collin Wolfe fly ball to right field and third on Spencer Packard's ground out to first. Williams plated his first run of the contest singling home Arias with a shot down the left field line for the early lead.

Adams (1-0) picked up the win allowing just one hit over four frames with three walks and a career-high six punch outs. John Vanderploeg worked a scoreless fifth inning giving up a hit and striking out one. Fred Sisco was touched for two runs (both earned) on three hits with four strikeouts in three innings, while Jack Yusko got the final three outs with the bases loaded in the ninth.

The Camels tacked on a pair of runs in the bottom of the second pushing their lead to 3-0. Connor Denning's solo home run to start the frame accounted for the first run before A.J. Hrica's RBI double with two outs scored Marcus Skundrich.

A double steal by Skundrich (home) and Collin Wolfe (second) gave way to another Camel run extending the lead to 4-0. Skundrich led off with a single to left field and took third on a Mayhue failed pickoff before crossing home on the steal.

Campbell scored three runs in the seventh making it a 7-0 ballgame for the Camels.

ECU finally pushed across a pair of runs in the ninth inning capping the scoring at 7-2. Nick Barber plated the first run with the bases loaded reaching on a fielder's choice that scored Alec Makarewicz. Two batters later Zach Agnos was hit by a pitch with the bases juiced plating the other run.

ECU returns to action on Saturday, Feb. 22 when it plays host to Georgia Southern in the first of three games. The weekend series has been altered due to potential inclement weather in the area on Friday. The two teams will play a doubleheader on Saturday starting at 12 noon with game two to follow approximately 45 minutes after. Sunday's contest has also been pushed back to a 2 p.m. (ET) start at Lewis Field inside Clark-LeClair Stadium.