Each week, staff at Carolina Journal looks back at the week in N.C. politics and chooses several interesting, relevant stories you may have missed. Here’s this week’s review: carolina journal, politics, week in review, march 13, 2020
Home
Categories
Login 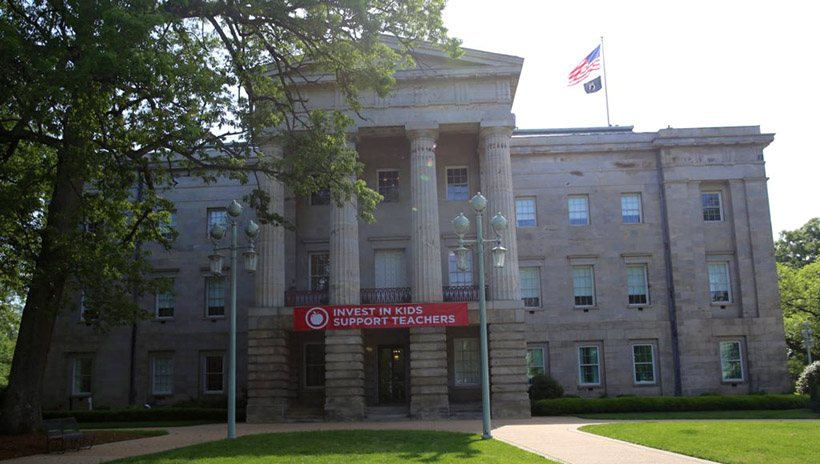 A banner backing the teacher walkout was attached to the west side of the Capitol. | Photo: Don Carrington/Carolina Journal

No runoff: Rep. Yvonne Lewis Holley, D-Wake, can breathe a sigh of relief after her competitor for the Democratic lieutenant governor nomination decided against a run-off. Sen. Terry Van Duyn, D-Buncombe, announced March 10 that she would not pursue a run-off for the coveted position, even though no one took more than 30% of the votes in the primary race. Holley will go on to face Republican Marc Robinson in November.

Coronavirus testing kits: North Carolina needs more resources to increase testing capabilities for coronavirus, U.S. lawmakers representing the Tar Heel State said in a letter to Vice President Mike Pence. Tillis; U.S. Rep. Richard Hudson, R-8th District; and U.S. Rep. David Price, D-4th District; sent a letter to the vice president urging the administration to send more supplies for testing kits to meet expected demand. "Unfortunately, North Carolina has not yet received additional test kits, which the CDC had indicated would be delivered this week at the latest," the letter said. "NC DHHS has made us aware they need further guidance on best practices to prioritize patients for testing given the limited supply of test kits currently available."

SEANC director: Robert Broome, director of the State Employees Association of North Carolina, suddenly stepped down on March 11 with no apparent explanation. A longtime lobbyist for the SEANC, Ardis Watkins, will take over as executive director. Watkins will be the SEANC's first female executive director in the organization's 73-year history.

Events cancelled: Several events across North Carolina have been cancelled over concerns about the spread of coronavirus. The annual Raleigh St. Patrick's Day Parade and Festival won't take place, the parade committee announced March 11. "We want to keep everyone as safe as possible, participants and spectators," committee organizers said in an email to the News & Observer. "We worked really hard, but we feel it is the best decision to keep our community safe." The ACC Men's Basketball Tournament, the Full Frame Documentary Film Festival, and the annual Spring Craft Fair at the State Farmers Market were all cancelled.