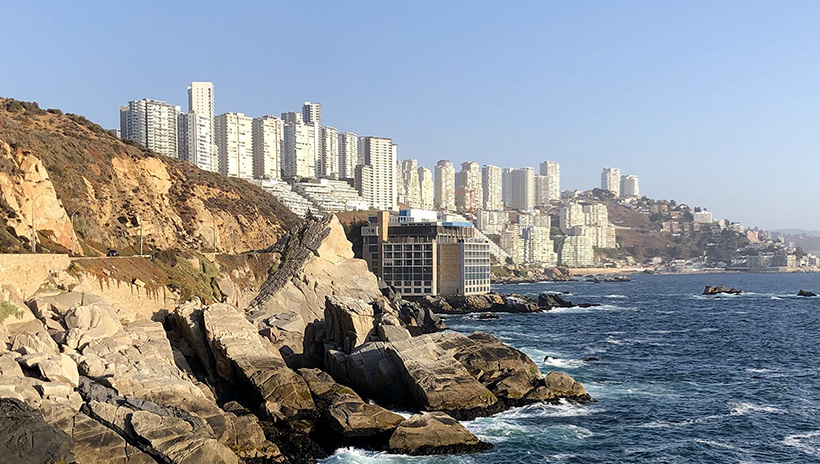 People around the world, and close to home, have had their lives upended by the COVID-19 pandemic. Many East Carolina University students studying abroad dealt firsthand with the emerging crisis early on, returning to the United States sooner than they expected when they left on their life-changing journeys.

"As a result of the Centers for Disease Control and Prevention raising their travel health alert level to 3, ECU made the decision to recall all of our students from study abroad programs. The scope of the COVID-19 crisis was unprecedented. Never has any U.S. university recalled all its students abroad at the same time," said Dr. Jon Rezek, assistant vice chancellor for global affairs.

"As we worked to return students home, we had three priorities. First and foremost, we considered students' safety. Second, we made every effort to allow students to continue their program academically. In many cases, their host universities turned to online classes as we did here at ECU. And third, we tried to make sure students were not harmed financially by the disruption. We worked with each returning student to compensate them for any rebooking fees they encountered.

"While we know ending their programs was a disappointment, we tried to accommodate students to every extent possible given the challenging situation," Rezek said. "We feel most of our students still had a wonderful experience, despite the disruptions." 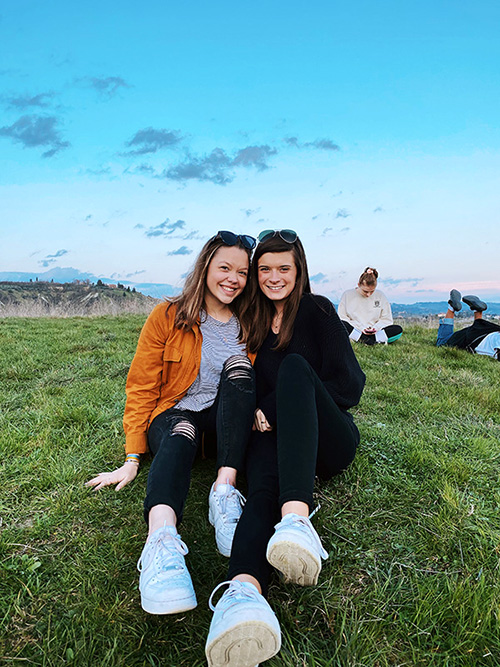 "The town is filled with culture, beautiful landscapes and some of the kindest people I have ever met. This is where I called home for the short time I was abroad," Baile said.

Her study abroad experience, which began Feb. 17, was supposed to last until mid-May, but she returned to the U.S. on March 4, flying from Rome to Philadelphia before landing at the Raleigh-Durham International Airport.

"I felt so at home in Italy. It took a lot of work on my behalf, and a lot of sacrifices from my family, for me to study abroad for a semester. So being asked to return after two weeks was heartbreaking," Baile said. "When it first happened, it was the beginning of the worldwide panic, so we were ignorant to what was happening around us.

"However, I do think that ECU made the right decision in bringing us home when they did. The university took great care of us when getting us back to the United States safely, helping us both mentally and financially. They were in constant contact with locals and our wonderful program directors throughout the whole situation and kept us informed throughout the whole process, which helped to ease us into the situation."

Upon her return to the U.S., Baile said she self-quarantined and had little to no contact with others, including her family.

"This was a lonely process and was scary because nobody knew if we would begin to show symptoms," Baile said. "Thankfully, I, nor anyone else from the study abroad trip, showed any symptoms within the 14 days, or up until now.

"Despite the circumstances that surrounded my study abroad, I would still recommend it to anyone. It was definitely the life-changing experience everyone says it will be," Baile said. "My heart breaks for everyone who has lost something due to this virus, but I am thankful for the people in my life who have made it better. I am beyond grateful to go to a university that values its students as much as ECU."

Sabree Flood is a senior majoring in foreign languages and literatures with a concentration in Hispanic studies education. She traveled to Santander, Spain, on Jan. 17 and was scheduled to remain in Spain until April 28. 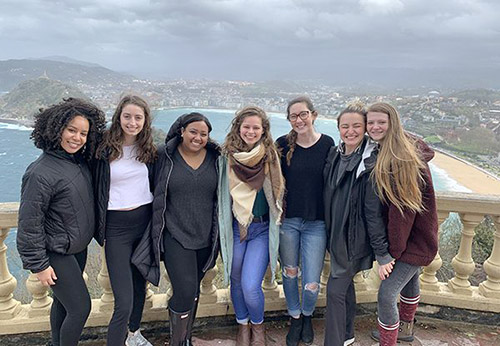 Sabree Flood and six of her study abroad classmates on an excursion to San Sebastian, Spain, to see the Basque Country. The background includes “La Concha” beach and the city of San Sebastian- Donostia. | Photo: Sabree Flood
"My experience was life changing. I was literally in an environment extremely different from my own. In regard to the people, the food, the tradition and the geographical landscape, I was definitely in a place outside of my comfort zone," Flood said.

Flood was taking many courses, including face-to-face classes in Spanish culture, Spanish civilization, Spanish art history, the history of Spain (Iberian Peninsula), Spanish conversation, Spanish grammar and Spanish literature. However, she had to cut her trip short and returned to the U.S. on March 15.

"I was affected emotionally. I was not happy about my experience ending so abruptly. I don't think I'll get this experience anytime soon and this pandemic did ruin a once-in-a-lifetime experience for someone like me who doesn't financially have the opportunity to easily do this again," Flood said. "But I do not place the blame on ECU, because they took the necessary precautions for our safety."

Once she returned to the U.S., Flood said she immediately quarantined with her mother in South Carolina. She was on day 12 of her self-isolation at the time of this digital interview but was not showing any symptoms of the virus.

"Fortunately, my international university has found a way for us to take classes online, and I am currently doing so while practicing social distancing," Flood said.

Marguerite Hemedinger is a junior majoring in both music education and Hispanic studies. She was studying on an exchange program in Valparaíso, Chile.

"I arrived in January and would have been leaving around July," Hemedinger said. "I came to take classes for my Hispanic studies major, but I chose this program for their school of music so that I could take music classes in Spanish as well." 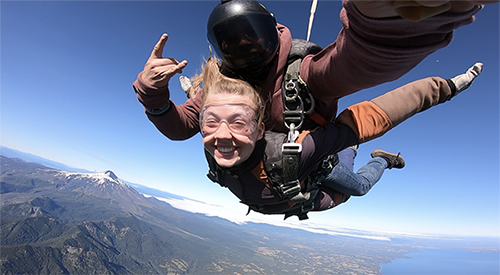 "My experiences with both my host university and ECU were helpful. Everyone was in constant contact, and I received updates from the staff at the study bbroad office, the Honors College, professors both from ECU and my school in Valparaíso, my advisors and the U.S. embassy in Chile," Hemedinger said. "I got the impression that though it was my choice to stay or leave, since the International Student Exchange Program (ISEP) never officially canceled my program, it was the right choice to leave. Staying with my host family would mean having to be quarantined there, and I wouldn't know the next time I would be able to get on a plane home since flights were being canceled and borders were closing. If I stayed, I wouldn't be able to travel or take my classes face-to-face, so I chose to go home, and ECU was helpful when giving me information for how to best do so."

Even though Hemedinger said she traveled through three international airports on her return trip, she never had to go through a CDC screening like many of her friends returning from Europe.

"I chose to quarantine myself, because I felt it was the best and safest thing to do," Hemedinger said. "I am just continuing to work on my online classes from Chile.

"I am disappointed that I had to leave early because this was a semester that I planned carefully for almost three years. However, I do understand that everyone is suffering from this and making sacrifices. I am grateful for the time that I had there and the amazing traveling I was able to do during the first two months. I met a lot of friends that I will be staying in touch with, and I know that I will be traveling back to Valparaíso as soon as I am able," she said.

Marisa Kelly is a junior majoring in biology and minoring in Hispanic studies. Her study abroad experience began on Jan. 25, when she flew 18 hours to the city of Granada in the Andalusian region of Spain.

"Ever since high school, I have wanted to travel the world and learn a new language, specifically Spanish, and I figured what better way to fulfill those two goals of mine than to study abroad for a semester in Spain," said Kelly. 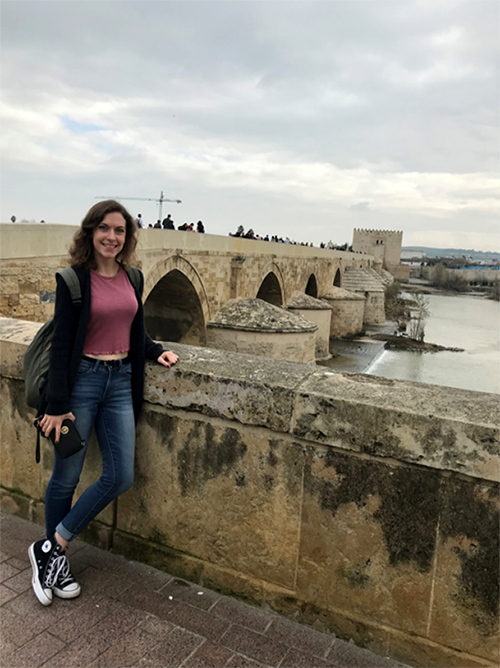 Marisa Kelly in front of the ancient bridge in Córdoba, Spain, that goes over the Guadalquivir River. | Photo: Marisa Kelly
Through her study abroad program, Kelly said she would have taken a full load of Spanish language and culture classes in the Centro de Lenguas Modernas at the University of Granada, running from the first week of February until the end of May.

While she was in Granada, Kelly stayed with a host family that further assisted in her ability to learn the Spanish language as well as their culture.

"Sadly, about a month and a half into my program, my classmates and I began to hear news of the COVID-19 pandemic spreading to Europe and North America, and just two short weeks later, I found myself saying goodbye to friends as they were called back home," Kelly said. "Not long after, I also had to pack my luggage and catch my flight back to the United States, leaving the city and country that I was planning on exploring for two months more."

Kelly made her return trip to the U.S. on March 16, the same night that Spain began to close its borders.

"If you could make a list of every positive adjective in the English language, that would basically describe my experience in Spain; though the words that I believe best describe it would be eye-opening, enriching and incredibly profound," Kelly said. "In just two short months, my Spanish skills improved exponentially, and I developed a completely different approach to the world and life in general. It has allowed me to develop into a young adult that can handle her own affairs and communicate for herself, and not just in one language.

"With that said, you can imagine how heartbroken I was when I received an email from ECU saying that I had to return. I understand that the COVID-19 pandemic is a global matter far out of my control and, given that the conditions in Spain began to plummet almost as soon as I left the country, I believe that ECU made the right decision to call me back. Otherwise, my return home would have been a greater battle than it was.

"Regardless, I do not think it is an overstatement to say that from the time I began to say goodbye to my friends and host family, to when I reunited with my actual family again, was the most devastating time in my life. Even now I still worry for the people I know back in Spain, just as I would for my own family."

Kelly was on day 11 of a 14-day self-quarantine at the time of this digital interview, and she said it had been fairly boring, although she was keeping busy each day thanks to her online classes.

"Even though I am not physically in Spain anymore, I will still be able to complete the classes I started," said Kelly. "However, the weirdest part for me has been distancing measures that my family has taken, such as going out onto our porch when my grandparents came to see me. Even when I wanted to give them the souvenirs I had bought for them in Granada, I had to wipe them off with Clorox wipes, set them on a table, step away, and then let them walk up to receive them so that we could still keep a healthy distance. I will say that the worst part of self-quarantine is not the apprehension of whether I have caught the virus or not, but rather the waiting to be able to touch my family members again."