Who Has the Advantage in the 11th District Runoff?

We are a week from the June 23 11th Congressional District Republican second primary, so it is a good moment to see how the race is going. While Lynda Bennett was expected to do well in the primary, Madison Cawthorn earned an unexpected entry into the runoff based mainly on strong support in his native Henderson County. 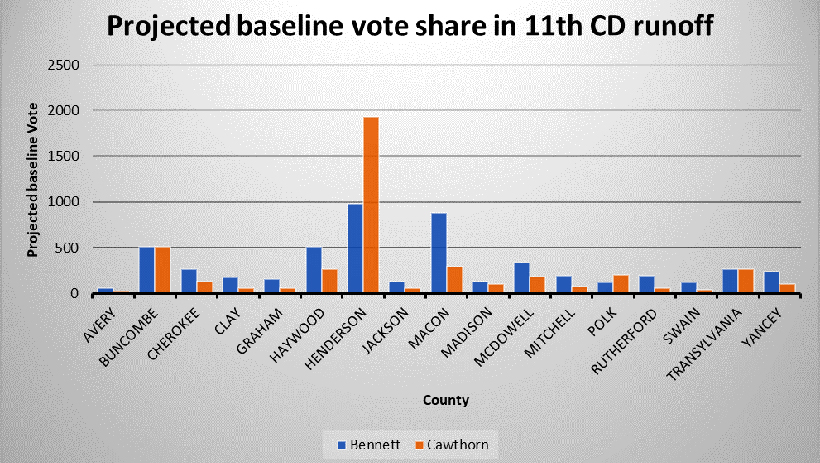 Figure 1: Projected baseline vote share based on the two-candidate vote share in the March 3 primary and turnout in the second primary as of June 15. | Data source: Vote Tracker

The obvious first take from looking at that projection is the relatively high voter turnout in Henderson County. The 2,917 votes there represent 30.5% of the votes cast in the 11th District second primary so far. By comparison, the county only accounted for 19.7% of all early and mail votes in the March 3 primary. That turnout boost combined with Cawthorn's two-candidate vote share of 66.2% there means that he has a baseline advantage of nearly 1,000 votes in Henderson County alone.

However, Bennet did better than Cawthorn in 14 of the district's 17 counties in the primary and was the top or second vote-getter in 15 counties compared to just four for Cawthorn. So, if the candidates maintained their two-candidate vote share in each county from the March 3 primary, Bennett would be ahead 55% to 45% based on the current turnout.

Of course, both candidates are working hard to expand their vote share and convince people who voted for one of the ten other candidates in the primary to vote for them.

One thing that separates the candidates is the endorsements they are touting. Cawthorn's supporters include most of the former candidates for the 11th district Republican nomination. The most important of those is NC Sen. Jim Davis, who represents the seven westernmost counties in the 11th district (although the Cawthorn campaign lists Davis as "supporting" rather than "endorsing" him). Almost as impressive is that Cawthorn has been endorsed by most of the sheriffs in the district, along with a host of other local officials.

A few groups have also independently spent money in the race. By far the biggest spender has been the House Freedom Action PAC, which has spent over $1 million in the race as of June 16 in support of Bennett and against Cawthorn.

By most measures, Bennett seems to have the advantage going into the last week of the race, but Cawthorn has surprised us before and could do so again.

What you can do: If you are a registered Republican or an unaffiliated voter who did not vote in the Democratic primary on March 3, and live in the 11th Congressional District, you can vote early until June 20. You can find the early voting locations for your county at the State Board of Elections webpage. Due to the Coronavirus, some election-day voting places have changed. All affected voters should have been notified by their county board of elections. If you discover that the place where you usually vote is closed, contact your county board of elections.

You can learn about the candidates at their campaign webpages (Bennett, Cawthorn). The Cherokee Scout also has an overview of the candidates and you can read more about them in the North State Journal.