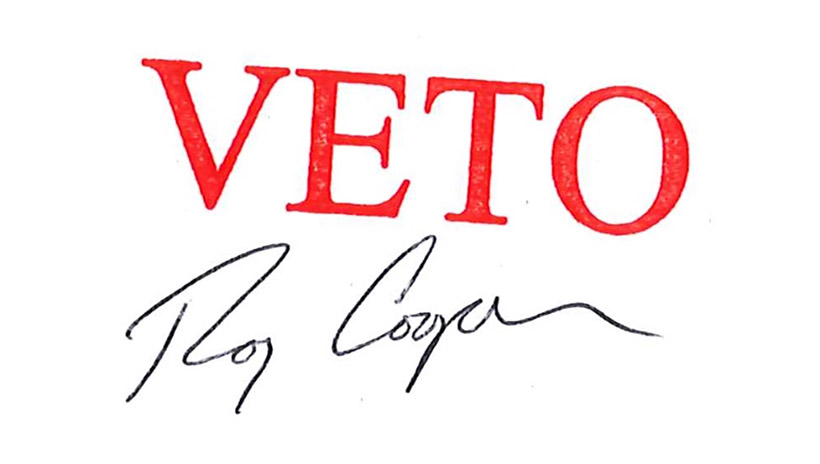 Cooper waited until the legislature adjourned for the weekend before acting on the measure, which strikes yet another blow against businesses struggling to survive amid a pandemic and ongoing protests over the killing of George Floyd.

Cooper, a Democrat, has now twice vetoed a move by legislators to open gyms and bars.

Sen. Rick Gunn, R-Alamance, who sponsored the bills, was quick to respond.

"On the same day attorneys argued in court that Governor Cooper's different treatment of bars and restaurants is inexplicable, Cooper vetoed this economic lifeline for thousands of businesses across North Carolina," Gunn said in a statement.

"Our state is one of only four that has not reopened gyms and fitness centers. Why did he walk with protesters without a mask on, but prohibits everyday citizens from using an elliptical machine at a gym? Why is it safe to have a drink outside at a restaurant, but it's dangerous to have a drink outside at a bar? Cooper needs to release the science behind these apparent contradictions."

In a statement, House Speaker Tim Moore, R-Cleveland, said, "Once again, the Governor shows that he prioritizes his own power over the livelihoods of responsible small businesses owners and families across North Carolina."

Cooper pushed to its limits a 10-day deadline to act on the bill, which would have become law without his veto. It's unclear whether the legislature will seek an override, although the Republican-controlled N.C. House is probably short of the needed votes - 60% of lawmakers present and voting.

Cooper signed 11 bills Friday, including a move to waive road tests for new drivers. He vetoed only H.B. 594.

Cooper, in the veto statement, wrote, "Tying the hands of public health officials in times of pandemic is dangerous, especially when case counts and hospitalizations are rising. State and local officials must be able to take swift action during the COVID-19 emergency to prevent a surge of patients from overwhelming hospitals and endangering the lives of North Carolinians. The bill could restrict leaders who need to respond quickly to outbreaks and protect public health and safety."

The latest gym and bar bill included what Gunn called a "fail-safe," which gave the governor flexibility in again closing the businesses should COVID-19 surge enough to overwhelm hospitals. A majority of the 10-member N.C. Council of State would have had to agree with such a move. Six members on the council are Republicans.

H.B. 594, which incorporated other bills loosening restrictions on bars, required at least a basic check on Cooper's power in the state's 100 diverse counties.

Friday, the N.C. Business Court heard a request from the N.C. Bar and Tavern Association to give private bars the same treatment he has given to private club bars, winery bars, brewery bars, distillery bars and restaurant bars in the state's pandemic reopening plan, a news release says.

NCBATA argues that allowing every other type of bar to reopen while forcing private bars to stay closed amounts to discrimination.

"Nearly 6,000 bars have been open for weeks while the governor's Executive Order continues to keep North Carolina's 1,063 private bars closed," NCBATA president Zack Medford says in a statement. "Private bars are just as capable of modifying their business plans to adapt to a COVID-19 world as the 85 percent of bars allowed to stay open. We are as ready and willing to conform to (state health department) guidelines as everyone else.

"These small-business owners are days away from losing everything, and they need a lifeline. We aren't asking for special treatment - we are just asking for a chance to survive."

The state, the News & Observer reported, argued Friday that people behave differently in bars, so they should stay closed.