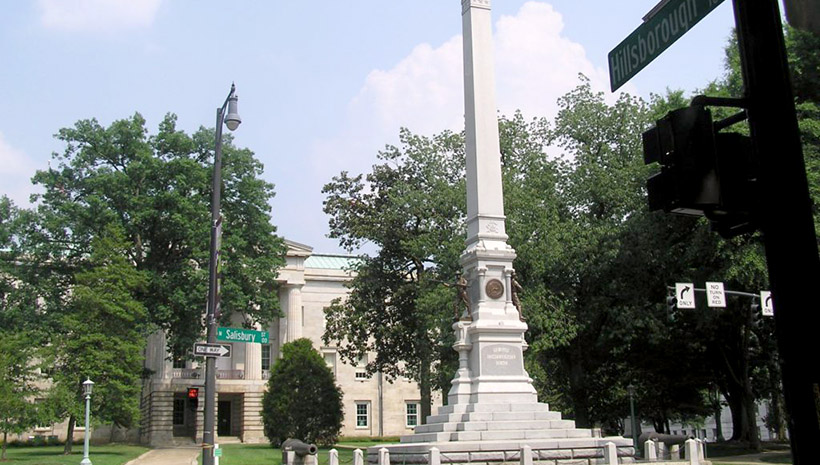 UDC monument before it was removed from State Capitol grounds | Photo: Wikipedia

Democratic Gov. Roy Cooper ordered Confederate monuments on the grounds of the State Capitol removed "to protect public safety." But he won't say who allowed a mob of protesters to take over the Capitol grounds earlier, toppling statues from two of those monuments.

In a statement issued Saturday, June 20, Cooper said he was "concerned about the dangerous efforts to pull down and carry off large, heavy statues and the strong potential for violent clashes at the site. ... Monuments to white supremacy don't belong in places of allegiance, and it's past time that these painful memorials be moved in a legal, safe way."

Cooper failed to elaborate on the "violent clashes" Friday, as peaceful celebrations of Juneteenth were winding down. Protesters tried to pull down the statues late Friday afternoon. Capitol Police turned them back and a skirmish broke out. Then the law officers withdrew.

Friday night, without resistance, protesters removed the statues. They hoisted one statue from a lamp post. They dragged the other through the streets, leaving it at the Wake County Justice Center. State Capitol Police then took the statue and dispersed the crowd.

Officials won't explain why police officers withdrew, or who gave that order.

A spokeswoman with the Department of Public Safety, the agency overseeing the State Capitol Police, wouldn't say who gave the order for officers to stand down after police and protesters clashed near the United Daughters of the Confederacy monument. She told Carolina Journal State Capitol Police Chief Chip Hawley was the "incident commander," but refused to elaborate on who ordered police to leave the scene.

"With the continuously evolving and volatile environment on the State Capitol grounds Friday evening, along with the ongoing threat to public safety, actions taken by [State Capitol Police] were intended to protect protesters, bystanders and law enforcement," DPS spokeswoman Pamela Walker said in an email to CJ.

"One person was arrested and charged with assault on a law enforcement officer, trespassing, and unlawfully resisting, delaying, or obstructing a public officer.

"Other arrests and charges may be forthcoming."

Republican leaders aren't buying Cooper's talk of taking out the statues in a "legal" way.

"I'm aware of only one person in this state who has final authority over state law enforcement. Did Gov. Cooper order the police to abandon the Capitol grounds? If not, who is in control of this state?

State historic monuments and markers are supposed to be protected from damage or removal by a 2015 law. It says "a monument, memorial, or work of art owned by the State may not be removed, relocated, or altered in any way without the approval of the North Carolina Historical Commission."

It provides an exception if building inspectors or other officials find the object "poses a threat to public safety because of an unsafe or dangerous condition."

Monuments in Durham, Greensboro, and Fayetteville, along with "Silent Sam" on the UNC-Chapel Hill campus, were removed without the Historical Commission's approval.

In a statement, Lt. Gov. Dan Forest, Cooper's Republican opponent in the 2020 election, said Cooper had no excuse for letting protesters take over the Capitol grounds.

"Last night's destruction occurred on state property, right next to [Cooper's] office. It is clear that Gov. Cooper is either incapable of upholding law and order, or worse, encouraging this behavior. ... When our elected leaders turn a blind eye to chaos, destruction, and disorder, society begins to unravel," Forest said.