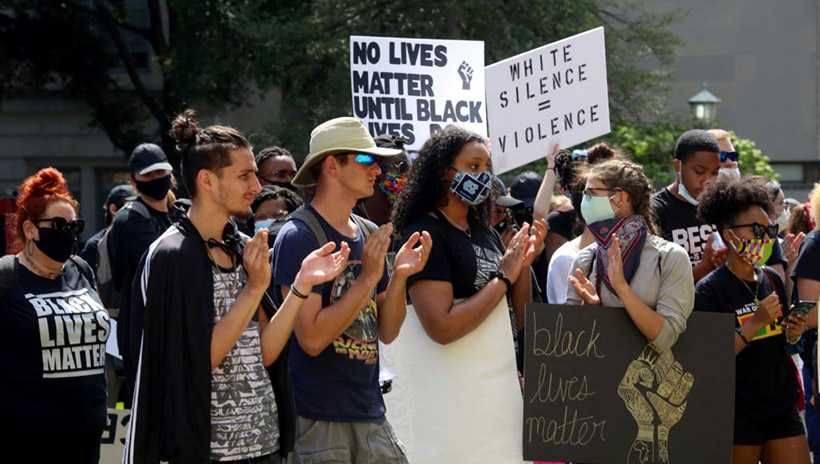 Some protesters at the June 2 demonstrations in Raleigh didn't wear masks while they weren't social distancing. | Photo: Don Carrington/Carolina Journal

Gov. Roy Cooper's executive order requiring face masks made North Carolina businesses responsible for enforcement. But they weren't given directions about how to comply until the order had taken effect.

Cooper on June 24 ordered that all North Carolinians wear face coverings in public to prevent the spread of COVID-19. But it was businesses, not individuals, who were liable if someone broke the rules.

On June 26, the administration said businesses weren't required to confront people who refused to wear masks, only to post signs encouraging customers to wear face coverings.

Cooper's order didn't authorize law enforcers to cite people, though police can charge people with trespassing if they refuse to leave a business.

Lynn Minges is president of the N.C. Restaurant and Lodging Association. She told Carolina Journal many restaurants and other businesses were already following state recommendations for face coverings. But, after the recommendation became a requirement, they were uneasy about possible altercations with customers who refused to mask up.

"We expressed a concern about restaurants having to play a role in managing some of this, and were explaining some of the concerns that we thought restaurants would have in trying to enforce this. It was putting us in an awkward situation," Minges told CJ.

CJ reached out to the N.C. Retail Merchants Association, asking whether the delay in guidance confused or complicated business operations around the state.

What discussions was the association part of before the mask rule was announced? CJ asked spokesman Andy Ellen. What input did NCRMA have in the governor's decision?

NCRMA's request was that, should mandatory face covering be implemented, retail employees not be expected or required to confront customers not wearing them, Ellen told CJ in an email.

"This request was made based on acts of verbal and physical assaults that had occurred throughout the country with regards to this issue and the priority of providing a safe shopping experience for both customers and employees," Ellen said,

Video posted on social media June 27 shows an altercation with a man in Cooks Flea Market in Winston-Salem. An officer, who reportedly was working security at the market, restrained and arrested a man accused of refusing to leave. The man wasn't wearing a face covering.

The Forsyth County Sheriff's office is investigating, The Winston-Salem Journal reported. CJ reached out to the N.C. Sheriff's Association to ask whether all county sheriffs were notified of the state's enforcement guidance. Spokesman Eddie Caldwell didn't immediately respond.