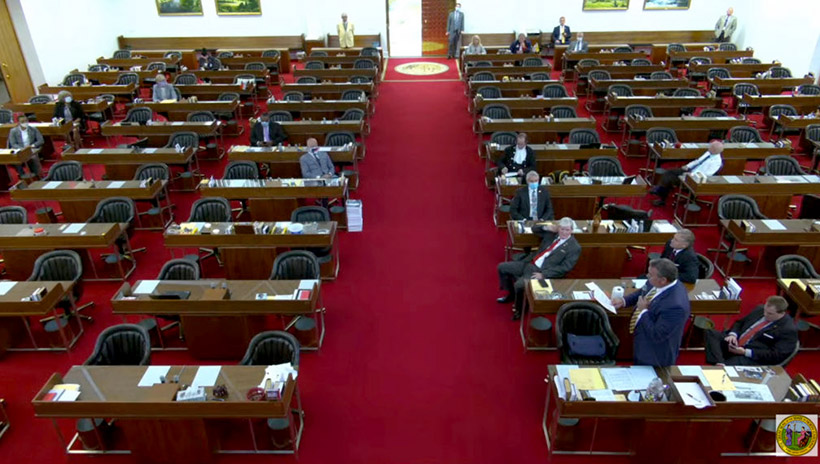 The turmoil surrounding COVID-19 derailed much of the work the General Assembly had done before the pandemic. Battles over redistricting reform, tax relief, teacher pay, and hemp legislation disappeared from the headlines.

But lawmakers have left Raleigh and plan to return in September. The 10-day period from the date the General Assembly passes a law and the governor must sign it, veto it, or let it become law without his signature passed. As the legislature finished its business, North Carolinians were navigating questions about the pandemic's effect on the new school year, traditional summer and holiday get-togethers, the November election — and asking when we'll have sports!

In case you've forgotten the issues that were hot on Jones Street, here's a brief review.

Governor NO: Cooper blew past Bev Perdue's 20-veto record fewer than 18 months after taking office. He vetoed 28 bills during the first two years of his term. The Republican-led General Assembly, with a veto-proof majority in 2017-18, overrode 24 of them.

The story was different in 2019-20. Cooper kept the ink wet on his veto stamp, rejecting 25 bills. But the GOP, with a smaller majority, overturned none of them.

The session began and ended without a new budget in place. Both General Assembly chambers passed a General Fund budget in 2019, but Cooper vetoed it. The state collected enough money to keep the government running and build up more than $3 billion in cash and savings at the end of February. But the governor and a largely lockstep Democratic minority forced the state to allocate that money under a series of "mini budgets."

Federal lawmakers still haven't decided if they'll let states use money from the COVID relief laws to fill budget holes caused when the pandemic shut the economy and crashed tax collections. The legislature plans to return in early September, hoping they'll have more guidance from Washington.

The Legislative Library maintains a list of every veto, starting in 1997, when voters gave the governor that power. (The link is https://bit.ly/2YydIji.)

Farm Bill: Senate Bill 315, aka the Farm Act of 2019-20, finally became law after months of dividing lawmakers over smokable hemp and shooting sports. Many farmers wanted to legalize the hemp industry. Law enforcement leaders said it would make it difficult for officers to distinguish between hemp and marijuana.

Lawmakers were also at odds over making it easier for farmers to offer shooting sports on their property. The General Assembly approved a conference version of Senate Bill 315, but only after lawmakers removed the contentious provisions. S.B. 315 eases regulations on farming production and maintenance, provides flexibility for agritourism, and supports marketing and branding for N.C. products.

Election bill: House Bill 1169, or the Bipartisan Elections Act of 2020, sent money to the N.C. State Board of Elections for COVID-19 expenses. Lawmakers approved temporary absentee ballot and vote-by-mail policies. The bill passed 105-14 in the House and 37-12 in the Senate. Gov. Roy Cooper signed H.B. 1169 into law. "Making sure elections are safe and secure is more important than ever during this pandemic, and this funding is crucial to that effort," Cooper said in a news release. "This legislation makes some other positive changes, but much more work is needed to ensure everyone's right to vote is protected."

Redistricting reform: Before COVID-19 disrupted everything, lawmakers were on board to reform how districts are drawn. As the short session ended, the energy for redistricting reform petered out. House Bill 140, the FAIR Act, amends the state constitution creating redistricting standards and establishing a redistricting commission for House, Senate, and congressional plans. Lawmakers couldn't use political affiliation or demographic information in drafting plans. A bipartisan group of legislators introduced the bill in February 2019, but since then lawmakers haven't touched the bill.

Another bill, House Bill 648, creates an independent redistricting commission and employs a special master to draw maps based on specific standards. A bipartisan group of legislators introduced H.B. 648 in April 2019. But, like H.B. 140, the bill hasn't moved out of the rules committee. Another bipartisan bill, House Bill 69, creates a nonpartisan redistricting process for legislative and congressional maps. Like the other redistricting bills, H.B. 69 hasn't moved out of the Rules Committee.

Even before COVID-19, redistricting reform was starting to lose steam. The budget impasse stoked distrust and resentment between Republicans and Democrats, likely killing the effort.

Criminal justice reform: The General Assembly fast-tracked two criminal justice reform bills. After receiving unanimous approval from lawmakers, the N.C. First Step Act and the Second Chance Act headed to the governor, who signed both on consecutive days in June. Under the First Step Act, judges have discretion in sentencing drug trafficking cases rather than tying them to mandatory minimum terms. The Second Chance Act revises expunction laws, making it easier to expunge records for nonviolent offenders. The two bills gained traction after George Floyd was killed by Minneapolis police.