N.C. GOP Calls Out Cooper Over Lack of Transparency, Lack of In-Person Briefings | Beaufort County Now | Republicans are blasting Gov. Roy Cooper for a lack of transparency and demanding that he hold in-person press briefings.

N.C. GOP Calls Out Cooper Over Lack of Transparency, Lack of In-Person Briefings 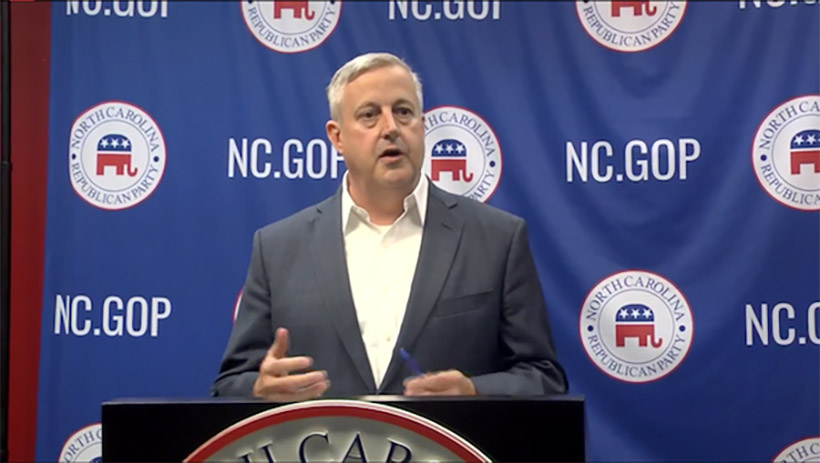 Republicans are blasting Gov. Roy Cooper for a lack of transparency and demanding that he hold in-person press briefings.

The NCGOP has asked for any document concerning the governor's schedule, travel plans, flight plans, and travel finance reports, as well as any communications about Cooper's schedule between the governor's office and the N.C. State Highway Patrol or the N.C. Department of Administration from Jan. 1, 2020 until the fulfillment of the request.

"The governor clearly has a schedule, and he's obviously trying to prevent North Carolinians from finding out what he's been actually doing while he's been holed up in the bunker over at the governor's mansion," said NCGOP Chairman Michael Whatley.

The N.C. Republican Party held its briefing in-person at its headquarters near downtown Raleigh. Whatley accused Cooper of being "missing in action."

Secretary of the N.C. Department of Health and Human Services Dr. Mandy Cohen has briefed reporters multiple times each week since the pandemic began. Cooper has usually joined her at these briefings at least once a week.

To attend the briefings, reporters register online to ask a question, listing their name and media outlet. Someone screens the callers and decides who can ask a question. But the governor does not request information about reporters' questions in advance. He has taken one question from Carolina Journal since the briefings began in March. Cohen regularly takes questions from CJ reporters

Nick Ochsner, WBTV's chief investigative reporter, said Cooper stopped taking his questions after moving to virtual press briefings. He says he has only gotten to ask Cooper one question since the pandemic began, and he has stopped calling in to every briefing.

"When will @NC_Governor start holding in-person press briefings?" Ochsner said in a tweet thread. "Meanwhile, I hear the same reporters get called on over and over at these briefings — in the same time I don't get to ask one question. This is compounded by the Gov's press office that gives no or limited responses when you email questions."

"Protecting health and safety should not mean limiting press access, and virtual briefings should not be used as an excuse to screen questions or outlets," RTDSA tweeted. "Please refer to our briefing guidelines, @NC_Governor."

Cooper did not respond to requests for comment.
Go Back