Opportunity Lost? the Education Empire Strikes Back at School Choice 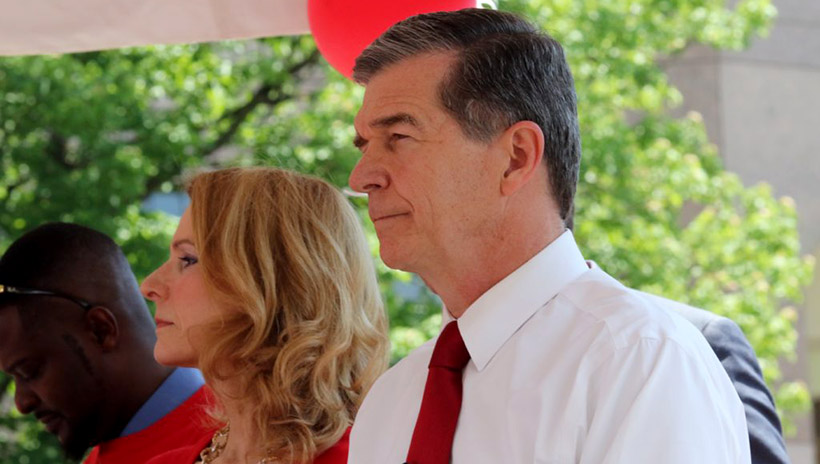 Gov. Roy Cooper, with First Lady Kristen Cooper at his side, helped rally teachers at the May 1, 2019, march on Raleigh. | Photo: Don Carrington / Carolina Journal

Her eldest, Amoree, attended private school until the second grade, but Brown lost her job, and the change in circumstances sent him back to public school. When Amoree returned to public school, he found himself miles ahead of other students in his class and became bored. Teachers struggled to connect with him.

Amoree was usually happy. But, his mother said, he became withdrawn and complained of headaches.

He had his reasons.

"I came to find out he was being bullied," Brown said. "Not just by students, but by a few teachers, as well."

Brown's youngest son, Julian, was born with one working arm. His public school wasn't able to give him the care he needed, Brown said. The school wanted Julian to do things its way, instead of accommodating his disability, she said.

It's a typical scenario in the one-size-fits-all approach to traditional public education.

The Opportunity Scholarship Program changed things. Through the program, low-income families can receive upward of $4,200 to help offset the cost of sending their child to a private school. With the vouchers, Brown was able to send her two boys to the private school of her choice.

Amoree, who is graduating this year from Wayne Christian School, is back to being that happy kid, Brown said. Julian is excelling at Wayne Montessori School.

The education bureaucracy sees things differently. And it's taking its opposition over school vouchers to court, arguing the Opportunity Scholarship program discriminates against LGBT families and uses state money to support religious schools.

The N.C. Association of Educators and the National Education Association on July 27 filed the lawsuit, which challenges the constitutionality of the Opportunity Scholarship program.

Private schools are unaccountable to parents and taxpayers, García said.

Tamika Walker Kelly, president of the NCAE, is one of the seven parents suing over the program.

It's an existential threat to the private school voucher program.

More than 12,000 children rely on the vouchers. Ending the program could mean returning these students to schools that won't meet their individual needs.

The lawsuit comes as the state grapples with providing a quality education — per the N.C. Constitution — during the COVID-19 pandemic. Schools won't reopen fully at the start of the 2020-21 school year. Instead, they'll go fully online or alternate between in-person and online instruction.

Republican lawmakers want students back in the classroom. Private schools are offering in-person learning, Senate leader Phil Berger, R-Rockingham, says in a news release. While wealthier families can afford to send their children to these schools, low-income families often can't.

Some private schools, like Thales Academy, are going forward with full time in-person instruction, with safety precautions in place.

Vice President Mike Pence and U.S. Education Secretary Betsy Devos visited Thales Academy's Apex campus on July 29 to talk about the importance of getting children safely back into schools.

Full-time remote learning will leave too many students behind, Pence said during the visit. It's best for children and for working families for schools to fully reopen. The decision on how to reopen is best left to local leaders, Devos said. But if schools decide against reopening, parents should have the ability to take their children elsewhere.

In essence, the money follows the student, Devos said.

North Carolina is one of 11 states that will receive the Rethink K-12 Education Models Grant to help support innovative ways of providing education during the COVID-19 pandemic. The awards range from $6 million to $20 million.

"If we've learned anything from this pandemic, it's that the antiquated one-size-fits-all approach to education is no longer tenable and education going forward must be more adaptable and student-centered," Devos said in a news release announcing the grants.

"My tax dollars should go wherever I choose to send my child to school," Hare said.

Each of her four children have a different learning style. While some excelled in public school, others did better with homeschooling.

Christian, her youngest, is the proverbial social butterfly. He wanted to go to a school where he could make friends, but public school wasn't working out, Hare said. He struggled with the course work.

The Opportunity Scholarship Program was created in 2014, but opponents took it to court before it could really begin.

Associate Justice Paul Newby, a Republican, is the only judge who ruled in favor of the Opportunity Scholarship program in 2015. He still sits on the state Supreme Court, although he's running for chief justice. His opponent, the incumbent Beasley, has significantly outraised him.

This time, the plaintiffs might have a better chance in N.C. Supreme Court, said Terry Stoops, vice president of research and director of education studies at the John Locke Foundation.

What's more, Cooper leads Republican challenger Dan Forest by wide margins in most polls as the election approaches. Democrats are pushing hard to control all three branches of government, which would prove ominous for school choice. The House and Senate have committed to fund Opportunity Scholarships for the next decade, though Cooper has repeatedly refused to include money for the Opportunity Scholarship in his budget proposals.

"Voucher opponents hope that our left-leaning state Supreme Court will do what the court wouldn't in 2015 — use an elastic interpretation of the state constitution to eliminate the state's private school scholarship program for low-income children," Stoops said.

Beasley, in a dissenting opinion in the original Opportunity Scholarship lawsuit, argued the program would create a larger class of underserved children.

Mangrum has made it clear she opposes school choice. She supports a moratorium on new charter schools and wants to move charters under school board authority.

"The current charter system is starving traditional schools of funding and segregating our schools, thus expanding the inequities between schools and districts," Mangrum said in a candidate questionnaire. "Under these conditions thousands of students' needs are left unmet."

During a Feb. 7 candidate forum, Mangrum said she hopes the state Supreme Court reverses its decision on Opportunity Scholarships. She called the program a "complete waste of money."

School choice opponents are going all in on legislative races, too. Education Now, a dark money group, is targeting six districts in hopes of flipping the Senate from Republican to Democratic control. (Republicans hold a 29-21 edge.) The group vows to invest $1 million to $2 million in an "unprecedented digital and direct-mail advertising campaign."

Meanwhile, the NCAE is launching a fall 2020 campaign called "Our Schools. Our Safety. Our Say." The campaign intends to influence the discussion on reopening schools as well as the 2020 general election.

The campaign's enemy is clear: "privatizers," or anyone who wants parents to have options for their kids.

In campaign documents, the NCAE accuses privatizers and their supporters of starving schools. One goal is to stop "COVID-19 flight" driving further privatization efforts — another is to unionize.

"If you aren't interested in helping state employees, such as teachers, gain the right to unionize, I will personally work to see you lose your next election," the letter reads. "I will work to mobilize every single person I can to support a candidate who will deliver what is being asked."

Republicans are pushing back.

"The far-left NCAE says it cares about equity in schooling, but it's suing to ensure low-income families can't afford to send their children to private school," Sen. Deanna Ballard, R-Watauga, says in a news release.

The 2020 general election could change that.

Neither Hare nor Brown would send their children back to public school if the court strikes down the Opportunity Scholarships program. They say they would homeschool instead.

The NCAE says the voucher program is unaccountable. Hare and Brown disagree.

"The idea that private schools are not accountable is absolutely ridiculous," Brown said. "There is accountability. They are accountable to me."