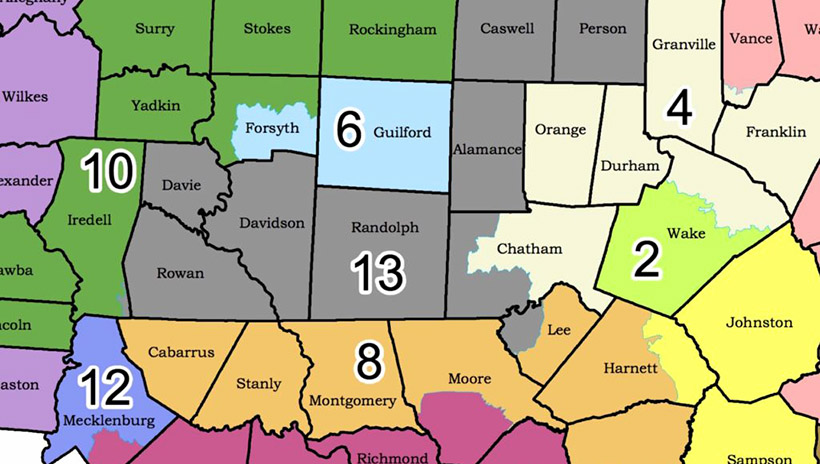 Only Mecklenburg and Wake counties have large enough populations for their own congressional districts. Only the Triad can limit a district to just two counties.

More than 4 million North Carolinans are missing from the 2020 census. Major media reports have emphasized a low census count could put billions in federal dollars at risk.

But it also could keep North Carolina from gaining a congressional seat.

The census count, done every 10 years, helps determine how federal money is allocated to communities. It also determines representation in Congress. North Carolina's population has grown by nearly 1 million people over the past decade. But if census takers don't count them, the people parceling out congressional districts won't know they're here.

Each state gets at least one of the 435 seats in the U.S. House. The other 385 are divided mainly by population. Fast-growing states can pluck congressional seats from states losing people.

If North Carolina's census count comes in at or below Michigan's, the 14th U.S. representative so many have anticipated could go to another state. Perhaps Montana, which has 1.1 million people but only one congressional seat.

Carolina Demography, a UNC Chapel Hill center focusing on data collection, found North Carolina's census response is ranked 35th in the U.S. As of Aug. 2, only 59% of N.C. households have responded — compared to 63% nationally.

The census is in a major time crunch, behind schedule even before the COVID-19 pandemic. Initially, the count was to finish by the end of July, but the U.S. Census Bureau pushed the deadline to Oct. 31.

The COVID-19 outbreak worsened during a critical collection period, when workers were going door-to-door to collect data from people who failed to report. Field operations were temporarily suspended, once again setting back the census collection.

The bureau had asked Congress for an extension to April 30, 2021, to deliver the preliminary results, but has since contradicted that request. The bureau quietly moved up the collection date from Oct. 31 to Sept. 30, giving census workers even less time to complete the count.

The Democrat-led U.S. House passed a bill extending the census deadline. But the Senate, which holds a Republican majority, shows no interest in taking up the measure.

"Historically, it has been more difficult to count the kinds of people who you would think would support Democrats," Taylor said.

The hard-to-count group includes lower-income people, racial and ethnic minorities, and transients, who tend to be overrepresented in bluer states and jurisdictions, Taylor said.

"If you give a blue state a congressional district it is more likely to end up having a Democrat representing it than a Republican," Taylor said.

One factor helping North Carolina is its large military presence, writes Rebecca Tippett, who heads Carolina Demography. In an article for MarketWatch, Tippett says the census once listed overseas military members' home states as their census addresses. But in 2018, the Census Bureau changed the rule. Military members temporarily deployed overseas will be counted in the state where they're stationed rather than their home state.

Had that rule been in effect for the 2010 census, North Carolina would have added a 14th congressional district, Roll Call reported.

Another political split has emerged over whether the census should include people living illegally in the U.S.

The Trump administration doesn't want to include illegal immigrants in the census. Trump released a memo July 21 calling to exclude the group from the official count, NPR reported. Civil rights groups are prepared to challenge the move in court.

Some states — including Texas, Florida, and California — would gain more congressional seats if undocumented people aren't counted, according to research by the Pew Research Center, said David McLennan, a political science professor at Meredith College.

"Since undocumented people are the hardest population to get an accurate count on, Republicans are pushing to have less time for the door-to-door counting and to not count undocumented in the final apportionment totals," McLennan said.

North Carolina's red-blue split shouldn't be affected by the debate over counting illegal immigrants, but a significant undercount would have consequences for federal money and a new congressional seat.

"That is a possibility with a shortened time period and the fact that North Carolina has one of the lowest response rates in the country," McLennan said.

Nonprofits are working overtime to get more people to respond.

"This definitely lights the fire under us and others across the state to make sure we are getting the word out and making a really strong call to action to complete the census," Brandy Bynum Dawson, the director of advocacy at the N.C. Rural Center. Dawson is leading the Center's Rural Counts advocacy program, which aims to improve the census response rate in rural areas.

N.C. Rural Center and the NC Counts Coalition are among the groups working to make the count more accurate.

"Any organization that has a trusted relationship with communities that are often undercounted in the census operation can be effective, trusted messengers," said Stacey Carless, executive director of NC Counts Coalition.

A number of barriers stand in the way of an accurate count. A lack of broadband access in remote areas is one. Some of the lowest response rates in North Carolina overlap with lack of internet access, Carolina Demography found. Areas where officials were forced to suspend field operations because of COVID-19 also overlap with low response rates.

Rural counties, such as Graham, Avery, Cherokee, and Watauga, have some of the worst response rates to the census. The pandemic didn't help.

"We had to revise and pivot ourselves to a new strategy, which was a lot online and utilizing social media as much as possible," Dawson said.

North Carolina's political parties aren't involved with the outreach effort. The N.C. Republican Party plays no part in the census count, Tim Wigginton, the N.C. GOP press secretary, told Carolina Journal. The N.C. Democratic Party didn't respond to an email from CJ asking about its involvement with the census count.
Go Back