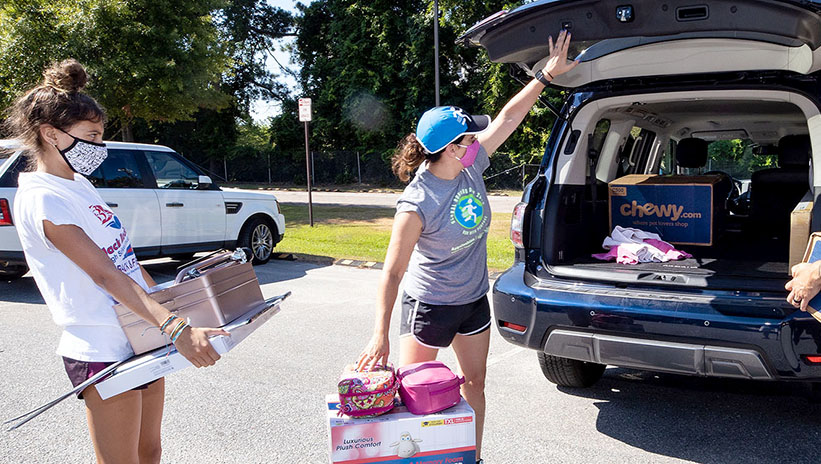 Following a months-long buildup filled with uncertainty, the first wave of students arrived on East Carolina University's campus last week to kick off the fall semester during a modified move-in process.

The scene was familiar — students and their families enduring eastern North Carolina's summer heat and humidity while toting clothing, bedding and organizers into residence halls — but then they departed, to return two weeks later for the start of classes.

"All of us in Campus Living understand the importance that a marker event like moving off to college has for families," said Bill McCartney, associate vice chancellor of Campus Living. "It is why we designed a process that allows for families to come and enjoy this life-transitioning process for their student with as little restriction as possible while maximizing their personal safety."

To reduce the density of families moving into the residence halls at the same time, Campus Living instituted two early drop-off periods — July 22-25 and July 29-Aug. 1 — during which students can move their belongings in and set up their rooms. Nearly 3,600 of the 5,500 students living on campus this semester signed up for a three-hour drop-off window. After their drop-off the students return home; they will come back to campus Aug. 7-9 for the start of classes on Aug. 10.

Students who do not participate in early drop-off will move in Aug. 5-6.

"We are hopeful that families will follow our safety guidelines for social distancing, and bring and wear face masks while they are on campus," McCartney said. "Personal safety is the first step to helping the larger group stay safe and healthy. This is an opportunity for parents to model appropriate campus expectations for personal safety."

Freshman Jayven White said he was grateful for the communication from Campus Living leading up to drop-off.

"I chose ECU because when I visited campus I felt like everybody cared about student success," he said. "I could feel the vibe and energy at ECU. The campus is beautiful, and I felt like I could thrive here. I'm OK with wearing the mask as long as I can be on campus."

White will be attending ECU along with two cousins — Daylen Wheeler and Makaila Whitaker — and Wheeler will be just two doors down the hall. White's mother, Dr. Felicia Whitaker, earned her master's and doctoral degrees at ECU.

Julia Whitaker, the grandmother of the three cousins, helped with drop-off and said she's glad they'll all be on the same campus to support each other.

"I feel great because I can do just one stop," she said. "I can come here and see 'em all and keep moving. It's wonderful, and I am so proud of them."

Logan Harrison, a freshman in the Honors College who plans to study political science, was skeptical of the drop-off process beforehand but said afterward that it went smoothly.

"In fact I would recommend the system of different moving times be used in the post-COVID era," he said. Harrison added that he was reluctant to lock the door and leave the room after setting it up, and he wishes it were possible to have the usual athletic and social events during the semester, but he looks forward to returning soon.

Having roommates drop off their belongings at different times struck Lindsay Swain as a good idea, she said. "This way, the room will not be cramped with both families trying to unpack all at once."

Swain is familiar with what Greenville and ECU have to offer since her parents, aunt and uncle, and grandfather are alumni and her brother is a current student.

"I had my heart set on ECU since freshman year of high school," she said.

A Washington, North Carolina, native who plans to study public health and would like to become a physician assistant, Swain said the semester will present a variety of new challenges, but she looks forward to making new friends.

"It is important to return to campus even if most classes are online," she said. "Moving in is a step in the return to normalcy. Although virtual experiences have a lot to offer, there is nothing like sitting down face-to-face with a friend and spending time together."

Swain said afterward that the process worked well for her and she appreciates the precautions ECU has taken to ensure its students' safety.

"If it takes us all wearing a mask and maintaining a 6-foot distance to have the most 'normal' freshman experience, then I will abide by those guidelines," she said.

Like White, freshman pole vaulter Rileigh Cardin said she was glad for the communication from ECU about how the process would work. She had been to campus once for her official visit but said she would have had no idea what to expect without the thorough emails from the university.

"Especially hearing from my friends about how their colleges are handling it, I'm really grateful for what ECU is doing with the early move-in and then coming back in two weeks," she said.

Harrison offered a word of guidance to the students moving in later this week in the second round of the drop-off period.

"My advice is to park close and bring lots of helping hands," he said.

Swain added that having everything in boxes ensures that it can be moved easily on a cart, helping minimize the number of trips.