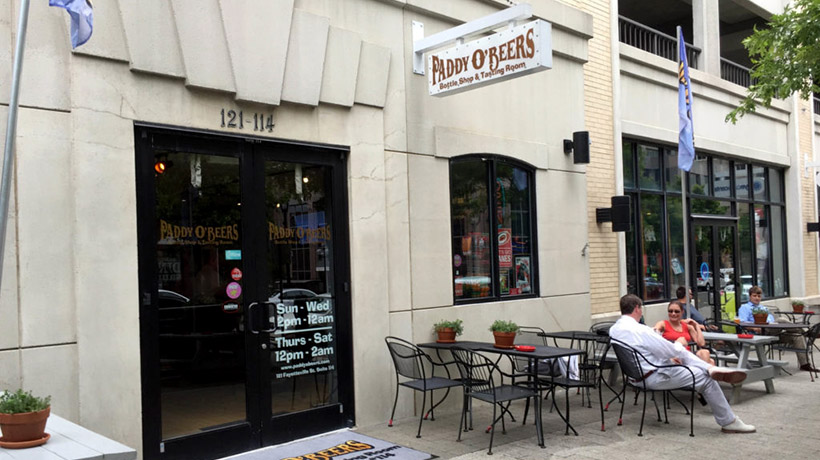 Paddy O'Beers on Fayetteville Street in Raleigh in 2015. At the time, some city officials limited outdoor drinking and dining because they were worried about too much "vibrancy." | Photo: Carolina Journal

Though Gov. Roy Cooper will ease some coronavirus restrictions in September, bars and private clubs may remain shuttered, Carolina Journal has learned.

If that happens, the industry — already foundering — will go bankrupt, says Zack Medford, leader of the N.C. Bar and Tavern Association.

The co-owner of several popular bars in Raleigh and Wilmington, Medford founded the NCBATA in May, after Cooper left bars and private clubs out of his modified Phase Two reopening. The governor's decision was a "death sentence" for hundreds of business owners, Medford said. NCBATA filed a lawsuit against Cooper, but lost its request for a preliminary injunction against the governor's order. A final ruling hasn't been issued in the case.

On Tuesday, Sept. 1, Cooper will make an announcement easing "some business and social restrictions he's put in place to limit the spread of coronavirus," WRAL reported Monday. The governor's modified Phase Two, which he extended last month, lasts until Sept. 11. Restaurants, hair and nail salons, barber shops, and retail businesses are open and operating with social-distancing rules. Bars, gyms, bowling alleys, movie theaters, and other social venues remain closed. All have been shuttered since March. CJ has reported extensively about how Cooper's changing rules are negatively affecting businesses, people, and communities.

When Medford answered CJ's phone call Monday, Aug. 31, exhaustion filled his voice. With the governor's announcement looming, the bar owner and advocate holds out little hope that anything will change. He's a father of three boys. Like roughly 1,063 other bar owners in his position, he's struggling to pay the bills.

Has NCBATA gotten any kind of communication from the governor, any clue about whether bars are included in the governor's plan to ease restrictions? CJ asked.

"No," Medford laughed, hollow, defeated. "This governor has never been much of a communicator, far as I can tell."

Meanwhile, anyone can open a new restaurant and get their alcohol permit. Anyone can go sit at a restaurant bar — except in Orange County — and order a drink. (Unlike New York, North Carolina doesn't force people to purchase food along with alcohol.) Distilleries, wineries, and breweries, too, have been allowed to reopen.

Bars that serve only alcohol are ready to abide by social-distancing rules, Medford said. If they reopen, they'll require customers to mask up and close down drinking by 11 p.m. Instead, they're sitting dark, a financial drain on those who own them. Medford, who co-owns Coglin's Raleigh, Paddy O'Beers, and Isaac Hunter's Tavern, among others, is set to lose at least one of his bars. He and his partner are no longer paying rent.

"Everybody in the industry is pretty much expecting the eviction notices to show up, sooner rather than later."

If Cooper is planning to reopen bars, he hasn't told anyone in the industry, Scott Maitland, owner of Top of the Hill Restaurant and Brewery in Chapel Hill, told CJ.

Top of the Hill reopened just two weeks ago, Maitland said, but given the governor's limits on capacity, it's virtually impossible to make a profit. Social-distancing rules are also confusing, Maitland said, since Orange County requires restaurants to stop serving alcohol at 10 p.m. The rule is stricter than the 11 p.m. alcohol deadline Cooper has set in place for the entire state. (On Monday, Cooper extended the 11 p.m. alcohol curfew until Oct. 2 with an executive order.)

It's just one example of variant rules that businesses are expected to follow. They're confusing, Maitland said, for consumers and business owners alike.

Maitland hopes that, whatever Cooper decides about reopening the economy, the decision is practical, logical, and consistent with the governor's initial reasoning.

"I wish we would keep in mind the original idea," Maitland said, "which is flattening the curve, not preventing the actual spread of the virus. Now we're too the point where people are starting to see the wheels on the economic wagon fall off."

For Medford, those wheels have fallen off and rolled down the hill. In a passionate plea on Facebook Monday, Medford implored Cooper to listen to the industry and throw it a lifeline.

"When the novel coronavirus threatened our state," he wrote, "bar owners like me willingly closed down our life's work because we trusted you wouldn't ask us to make that sacrifice unless it was absolutely necessary. As our governor, we believed you would do everything in your power to help us survive.

"That has not happened."