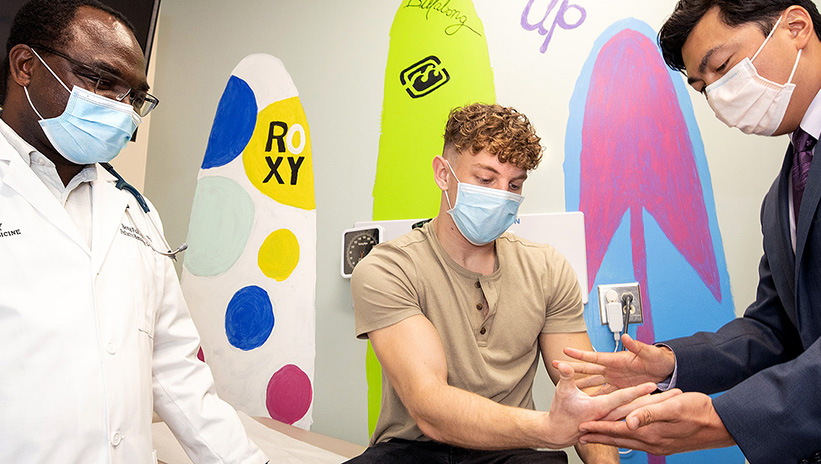 By all accounts a typical teen, Luke Haithcock loved to high-five his friends. The school-hallway equivalent to a handshake, the greeting punctuated Haithcock's days at South Central High School in Winterville.

One day, he noticed that a routine high-five caused a twinge of pain in his right palm. Not long after, another one sent pain ripping through his hand and up his arm. He felt it in the pit of his stomach; it knocked the wind out of him.

What happened next put then-15-year-old Haithcock's high-school career on pause and changed the direction of his life.

In 2017, he was diagnosed with monophasic synovial sarcoma of the median nerve of the hand. Synovial sarcoma is an aggressive soft tissue malignancy that makes up only 10% of soft tissue sarcomas, which are themselves very rare in children. It affects only one to three patients per one million people.

Haithcock and his parents chose a health-care team of East Carolina University and Vidant Health providers that used a collaborative approach to treatment-making the case a worldwide example of successful treatment of this cancer.

The rarity of the disease, its location and Haithcock's age at diagnosis make ECU and Vidant one of only a few centers around the country with experience in treating it.

"We will be able to share our treatment strategies and experience with others around the world who may be confronted with similar cases," said Dr. Beng Richard Fuh, director of the ECU Brody School of Medicine Division of Pediatric Hematology and Oncology and an oncologist and pediatrician at Vidant Health.

Haithcock, now 19 and in his second year majoring in exercise physiology at ECU, celebrated three years of remission in August and chose to share his experience to mark September as Childhood Cancer Awareness Month.

"Having cancer was bad, but in a way it changed my life for the better," he said. "Being diagnosed was like a 'reset switch' got hit. It showed me that life is so precious and should not be taken for granted."

While the five-year survival rate hovers around 50-60%, the outcome of synovial sarcoma is more favorable among younger patients and when the tumor affects the extremities, its most common site of origin. This type of cancer has also been seen in the heart, lungs and small intestines.

By the time Haithcock experienced too much pain to play tennis, he noticed a raised, cyst-like bump on his palm.

His parents, Tommianne and Roger Haithcock, sought guidance for their son's rare case from a team led by Fuh and Dr. Yifan Guo, clinical assistant professor of plastic and reconstructive surgery in the Brody School of Medicine's Department of Surgery and a Vidant Health surgeon.

"To our knowledge, this is the sixth case of intraneural synovial sarcoma of the median nerve reported in the literature," Guo wrote in a manuscript on the case. "Our patient is the youngest reported... This case is particularly notable for rarity of disease, age of the patient, tumor location and extent of nerve involvement."


"I think about what I was like before I got sick. This experience changed me, helped me find my passion, and that’s what I feel my role is today, to inspire and motivate people through what I went through, by hearing my story."
— Luke Haithcock, cancer survivor and ECU student
Because of those remarkable characteristics, a care team was assembled with emphasis on collaboration.

"The location of his tumor was very precarious," Fuh said. "Through extensive discussions and coordination amongst the different specialists including oncology, plastic surgery, radiation therapy and physical therapy, we were able to avoid amputation and other severe complications in this child."

"The rarity of Luke's condition presented a new set of parameters for cancer treatment," said Roger Haithcock. "While we were given multiple options for treatment, our decision was solidified with a couple of key conversations. The time spent with Dr. Guo and Dr. Fuh were invaluable to our decision. Dr. Fuh made it clear that the battle belonged to Luke but we, the family and medical team, are his 'army.' Those words still resonate today."

That decision also still echoes in the minds of the doctors as well.

"In the end, they chose not to go anywhere else for treatment," Guo said. "The fact that they decided to stay with ECU and Vidant for the whole treatment duration speaks volumes."

Haithcock underwent a total surgical resection of the tumor, a procedure that required exquisite precision because of the tumor's placement on the nerve. The tumor itself was initially believed to be benign, until surgery revealed the nature and extent of the cancer.

"Using a microscope, we dissected it and essentially peeled the tumor off the nerve while preserving the nerve itself," Guo said. "Luke has among of the best outcomes known in literature, as rare as it might be. Some other patients had to deal with recurrences, metastasis and hand or forearm amputation to control the disease progression. So far, there has been no recurrence. He's strong and is using his hand. He's done wonderfully, and not just in terms of being cancer-free."

His case and its current success also illustrate the level of care available for future patients.

"This demonstrates the complexity and expertise present here at ECU and Vidant Medical Center," Fuh said. "ECU is well equipped to provide high quality and compassionate care for children in eastern North Carolina."


A special kind of patient 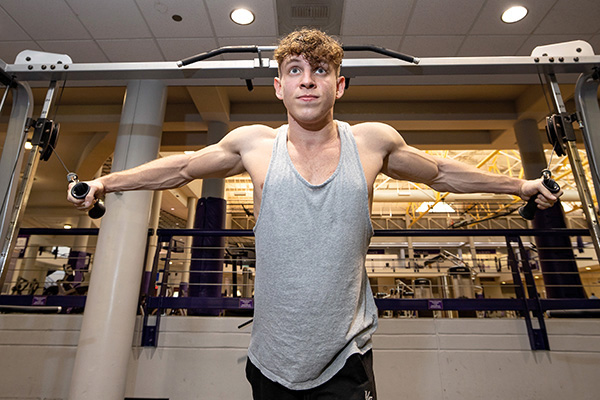 Now in his third year in remission from a rare cancer, Luke Haithcock focuses on majoring in exercise physiology at ECU and maintaining a health and fitness regimen.
Today, Luke Haithcock is a picture of vitality.

His smile is equal parts kind and genuine, accompanied by a "take-what-comes" attitude. As he shares his story, he runs his hand through a mop of golden-brown curls, a fairly new feature that marks his post-cancer experience and holds special meaning to him.

In preparation for the side effects of chemotherapy, several of Luke's friends threw a shaving party. The whole group shaved their heads, shortly before the prom.

"I underwent seven rounds of chemo with three via chemo port in my chest and one experimental oral chemo, along with 35 days of radiation," he said. "My hair basically melted off my head."

When he returned to school, other students oblivious to his condition made remarks and asked questions about his hair, which was growing back pure white. During that time, his teachers rallied around him, helping him study and stay on course to ensure passing grades in his classes, and the Haithcocks' church family also encircled them during the experience.

That collective solidarity gave Haithcock strength to endure the treatments that had him vomiting daily, eventually losing 35 pounds along with his hair, side effects of chemo and radiation that children with cancer experience during their journeys.

Mindful of taking care of himself during treatment, Haithcock began a workout regimen to ease stress and maintain a level of control over his own health.

"I initially started working out in the midst of my chemotherapy, about a few months in," he said. "The gym became my escape from reality; I could leave all my problems behind and just lift. I was unable to gain muscle at all, so it really helped reinforce my mind. I now work out five to seven days a week, with a clean diet. Consistency leads to the formation of good habits, giving you the momentum to success."

In 2018, Haithcock met Dwayne "The Rock" Johnson and his stunt double Tanoai Reed through the Make-a-Wish Foundation, boosting his motivation to pursue helping others, including cancer patients, achieve health through fitness. Haithcock now has an Instagram page (@Luke.haithcock), where he posts about health and fitness and shares details of his cancer journey.

One of his greatest hopes, he said, is that more can be done for patients who have traveled the same cancer journey that he has, with the hope of a similar positive outcome.

"I think about what I was like before I got sick. This experience changed me, helped me find my passion, and that's what I feel my role is today," he said, "to inspire and motivate people through what I went through, by hearing my story." 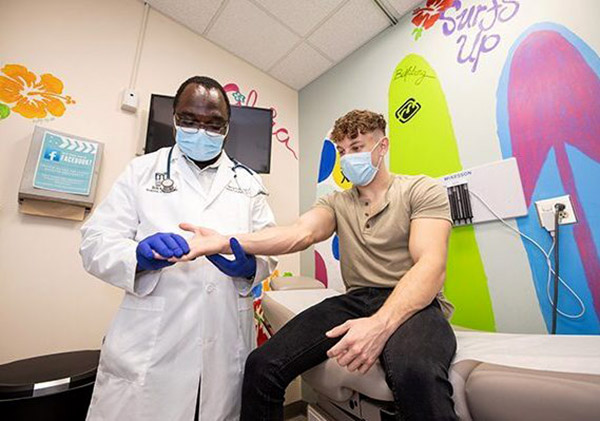 Dr. Beng Fuh examines the hand of Luke Haithcock, who was diagnosed at 15 years old with a rare cancer on the median nerve in his hand. Haithcock is now in remission.

A story of hope

As of now, Haithcock's only noticeable residual effect is a shorter range of motion when bending his right wrist back; he credits the nearly normal use to his mother who helped him.

That kind of compassionate care from family and physicians is the essence of what he hopes to pass along to others; it remains as he returns every six months for scans and check-ups to monitor his health.

"Dr. Guo and Dr. Fuh have been the best," he said. "I'm grateful for their knowledge and expertise; there is definitely a permanent bond."

Guo said the story is special because of its potential impact on others around the world.

"This is a story of hope," he said. "We're not just doctors; we don't see our patients as a business. We see them as vulnerable, and we want to do what's best for them. We are hopeful that this will make ECU a center for treatment of this type of cancer now that we have experience with it."

Shifting his focus toward earning an ECU education, Haithcock considers the possibilities for his future from a multi-faceted perspective beyond his years.

"Physically, ECU has been essential to my healing process," he said. "Academically, ECU is preparing me for a life of making a difference in the lives of others."