NCAE Said They Would “Change the Players in the Game.” Did They? | Beaufort County Now | For the past two years the North Carolina Association of Educators (NCAE) has been mobilizing and organizing to elect lawmakers who are more aligned with the organization’s views on public education. | civitas, NCAE, association of educators, public education, long-term goals, state legislature, november 19, 2020

NCAE Said They Would “Change the Players in the Game.” Did They?

For the past two years the North Carolina Association of Educators (NCAE) has been mobilizing and organizing to elect lawmakers who are more aligned with the organization's views on public education.

In 2018, Mark Jewell, the former president of NCAE, underscored the organization's long-term goals when he told a reporter from WRAL, in reference to the state legislature, "We don't anticipate much change from this group. So, we're going to change the players in the game." North Carolina's largest teacher's union mobilized individuals and worked hard to elect pro-NCAE candidates.

Although we don't yet have spending totals from the November elections, as expected a lot of money was tossed around. Three weeks before election day, the U.S. Senate race between Thom Tillis and Cal Cunningham had already become the most expensive race in the history of the senate. As of last week, $287.6 million had been spent on the race. Outside spending accounted for about $220 million of that total.

Preliminary estimates on election spending are instructive. Veteran teacher union watcher Mike Antonucci recently reported the National Education Association, the parent organization of NCAE, had raised $23 million, almost all of which it passed along to its super PAC — the NEA Advocacy Fund. How big are NEA contributions? NEA ranks eighth in the nation among funding of outside groups. Of the $23 million spent, almost 99 percent went to benefit Democratic candidates.

So how did NCAE-endorsed candidates perform in North Carolina?

To answer that question, we will look at election results for federal, Council of State and statewide judicial races. Part II of this article will report on results from state House and Senate races. 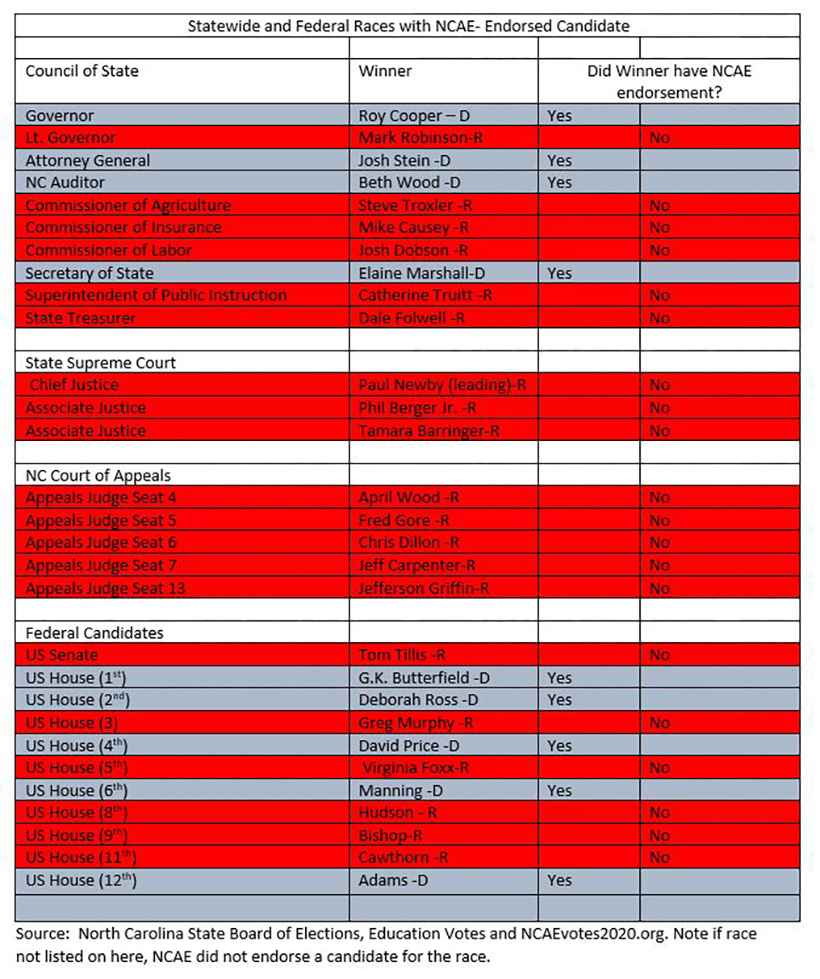 In summary, four incumbent Democrats on the Council of State were re-elected, as were three Republican incumbents. Of the three other offices where an incumbent was not running, Republicans (none of whom were endorsed by NCAE) won all three elections.

It looks like NCAE candidates will be shut out (0 for 8) of the judicial races, lost an expensive Senate race and won about half the congressional races they contested.

NCAE endorsed candidates won 9 of 29 of the total races for Council of State, statewide judicial races and federal offices. Stated another way, NCAE endorsed candidates won 31 percent of the races they entered. While two North Carolina congressional districts flipped from having Republican to Democratic representation. Both Republican incumbents cited redistricting as one of the factors in their decision not to seek re-election. Moreover of the 29 races listed, not a single incumbent Republican was defeated by a candidate endorsed by NCAE.

For an organization that said it was going to "change the players in the game," and has spent millions on elections, it will be hard to find any NCAE members or supporters who are happy with those results. What happens next with NCAE is something many will be watching.

In part II we examine how NCAE endorsed candidates did in legislative races.