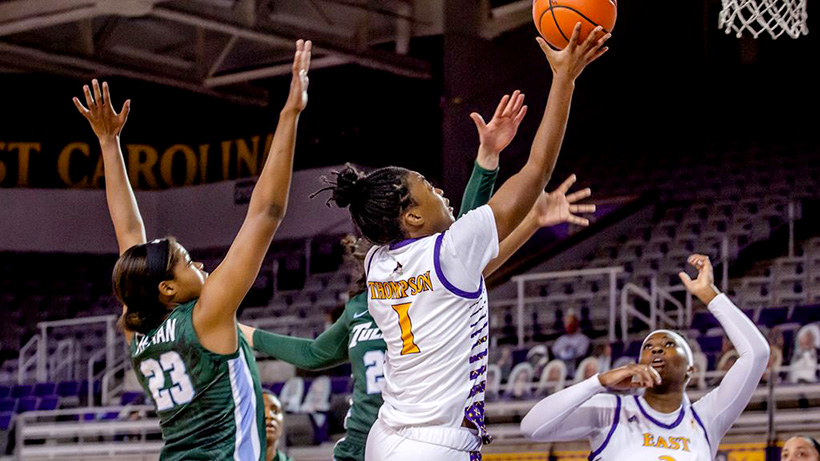 The Pirates (5-3, 3-0 AAC) improved to 3-0 in league play for the first time since joining the American Conference prior to the 2014-15 campaign while also topping the Green Wave (4-3, 0-2 AAC) for the third consecutive time. Coupled with a win at Cincinnati Sunday, ECU has beaten the teams ranked third (Tulane) and fourth (Cincinnati) in the AAC preseason coaches poll. The Pirates were selected ninth.

"Tulane is a really good team, so we knew we had our hands full," head coach Kim McNeill said. "They can shoot it. They have good guards and versatile players, so we needed to be really sound defensively. I can't say enough about my team. I am so proud of them. I am hard on them sometimes but that's because I know how good we can be."

Taniyah Thompson finished the contest with a season-best 27 points on 11-for-19 shooting from the field. She was one of four Pirate players to score in double figures as Sierra DaCosta, Lashonda Monk and Maddie Moore netted 18, 12 and 10 points respectively. Moore, a UNC Charlotte transfer, scored in double figures for the second time in as many games this season after receiving eligibility last week from the NCAA. Dominique Claytor put together a monster effort on the glass, pulling down a career-high 15 rebounds. She also dished out six assists and collected two steals.

The Green Wave's Arsula Clark notched a season-high 28 points to lead all scorers and was complemented by Jerkaila Jordan who scored 16.

Coming into the contest, Tulane was out-rebounding its opponents by 5.3 boards per game, but ECU turned the tables and out-worked the Green Wave by a 44-37 margin while also tallying 14 offensive rebounds. The Pirates had one of their better performances in the paint, out-scoring Tulane 36-34 down low. East Carolina enjoyed its best shooting effort of the year, knocking down 29 of 65 attempts (44.6 percent) from the floor. Additionally, the Green Wave entered the day limiting its opponents to 61.5 points per game, but the Pirates eclipsed the 70-point mark for the second-straight outing.

DaCosta dropped in the first points of the game with a triple and would keep ECU in front 5-2 after a made jumper at the 8:12 mark. A pullup jumper converted by Monk made the score 7-4 with 6:38 remaining in the quarter, but Tulane netted five straight to pull ahead by two at the first media timeout. The Pirates made a little run, scoring four of the next points to draw even at 11-11, but a fastbreak jumper that rattled around and in by Mia Heide sent the Green Wave to the second period with a 15-13 edge.

East Carolina turned up the juice defensively to begin the second quarter, putting together a 15-1 run that was capped by a DaCosta three-pointer. When the dust cleared, the Pirates found themselves ahead 28-16 with 5:26 on the clock. Tulane was unable to reduce the ECU lead to single digits the rest of the way as a Dynah Jones three capped the scoring in the half and left the Pirates with a 35-25 advantage.

A trio of East Carolina players notched double figures in the scoring column in the first half — Thompson (11), Monk (10) and DaCosta (10). Clark led the way for the visitors with 11 points. The Pirates held a slight edge on the glass, collecting 23 rebounds to the Green Wave's 22. Tulane enjoyed a distinct advantage at the free throw line as it was awarded 20 attempts but could knock down just nine. ECU converted two of five.

The Green Wave raced out of the gate, outscoring the Pirates 7-2 in the first two minutes of the third stanza to slice their deficit to 37-32. ECU settled down from there, extending the lead back to 10 at 44-34 after a free throw by Claytor. The teams traded baskets in the final 1:36 and the Pirates headed to the fourth period with a 50-42 edge.

East Carolina looked like it was going to run away with the contest early in the final stanza when a pair of DaCosta free throws put the Purple and Gold in front 56-42, but Tulane mounted one final charge and used a 13-4 run to draw within 60-55 with 5:39 to go. Thompson and Alexsia Rose scored consecutive buckets to stretch the Pirate lead back to 64-55 before Clark dropped in a layup to make it a seven-point affair once more. The dagger occurred with 3:02 left in the game when Thompson converted an old-fashioned three-point play to make it 67-57. Tulane was able to come no closer than six down the stretch.

"The last 72 hours have been very challenging mentally," McNeill added. "For us to go on the road and get a win at Cincinnati, then return home and have less than 24 hours to prepare for a really good team that runs a lot of stuff and come out with a win makes me really proud heading into Christmas Break."

Up Next: East Carolina returns to the court in the new calendar year, traveling to Tampa Saturday, Jan. 2, for an American Athletic Conference matchup with USF at the Yuengling Center. The Bulls are ranked as high as No. 20 nationally this week.