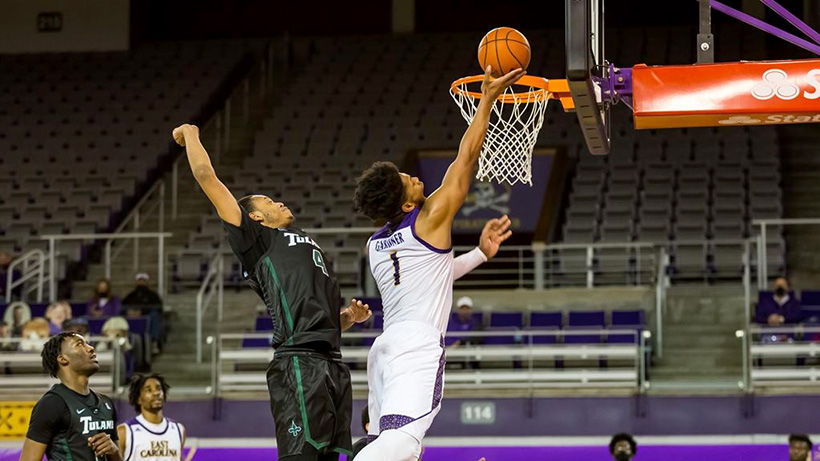 GREENVILLE, N.C.     Jayden Gardner had 21 points and 10 rebounds for his third double-double as East Carolina beat Tulane 68-58 on Tuesday.

The Pirates scored 13 unanswered points over a 4:38 stretch in the first half to take a 26-16 lead, holding Tulane (5-2, 0-2) scoreless for nearly five minutes. Baruti scored all six of his points during this span that propelled ECU into the lead which it never relinquished.

The Green Wave pulled within five with 1:33 remaining in the half before Tyrie Jackon's driving layup put ECU by seven at halftime, 32-25.

The Pirates held Tulane to just five points in the first seven minutes after halftime and extended their lead to 19, 49-30, with 13:26 to play.

The Green Wave cut nine points off the Pirates' lead with nine minutes to play, before Gardner and Suggs asserted themselves combining for 15 of ECU's final 17 points.

POSTGAME QUOTES     "Our defense was good early. We were able to get some stops. Got in a little bit of an offensive rhythm to start the second half and got a little bit of a lead. I think our guys, for the most part, did a good job of following the game plan. For the most part, I was happy with our defensive effort, and we did some good things offensively." — ECU Head Coach Joe Dooley

"I'm a patient guy, I'm an unselfish guy and my team is winning, that's the main thing. We were up by seven and the game just came to me slowly. Some nights you're going to start off strong and some nights you're going to start off in the second half and my half was the second half, but we were winning and at the end of the day it's just about getting the W and being there for my teammates and executing really well." — Jayden Gardner

"We struggled out of conference last year, so I feel like winning one of these games and getting back to 1-1 in the conference gives us confidence going into the Christmas break." — J.J. Miles