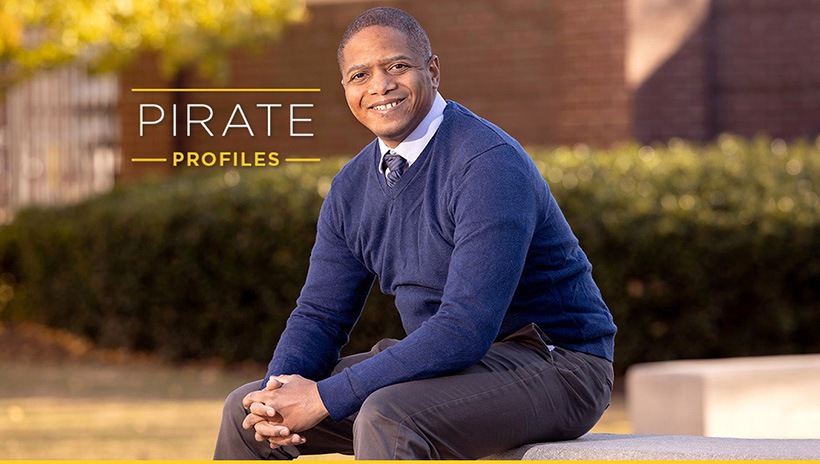 Taking a cue from his postdoctoral mentor Timothy Church, Swift is an associate professor in the Department of Kinesiology in the College of Health and Human Performance at East Carolina University.

"He has this way of making everyone around him better and driving us to believe in doing the best possible job you could," Swift said of Church, a leading researcher of exercise and obesity. "He also taught us to dream big with research and not shy away from big challenges."

Swift grew up in Flushing, an area of New York City.

"New York City was an amazing place to grow up. I had an opportunity to interact with many people of different cultures," Swift said.

He went to the University of Virginia and obtained an undergraduate degree in psychology, but he had bigger dreams. 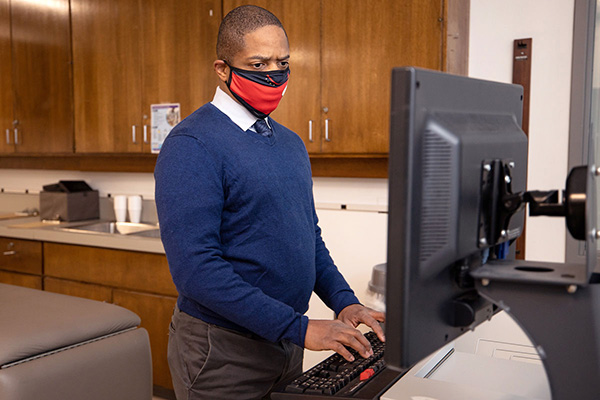 Dr. Damon Swift works at a computer in a lab in the Ward Sports Medicine Building.
"I knew I did not see myself doing research in psychology or doing psychotherapy," Swift said. "I decided to take an intro level exercise physiology course, and it was the most fascinating class I've ever taken. From there I took as many sports medicine classes as I could so that I could have enough credits to go into the exercise physiology master's program. After this, I thought that I would go into cardiac rehabilitation but then got involved in an exercise training study about exercise intensity. In working on that study and going to my first scientific conference, I was hooked. I did a postdoc at an obesity research center on large-scale exercise trials in Louisiana and the rest is history."

As the time came to find a teaching position, Swift knew of the reputation of ECU's Department of Kinesiology.

"ECU is always known as a great place for exercise science," Swift said. "When it came time to apply for professor positions, the group led by (Professor) Joe Houmard showed a lot of room for collaboration between more mechanistic and clinical sciences. In addition, I saw a lot of opportunity to increase the scale of my research."

Swift was the principal investigator for a Prescribed Exercise to Reduce Recidivism After Weight Loss (PREVAIL) study, the goal of which was to look at the impact of exercise level on weight loss and maintenance after people had lost a significant amount of weight. He worked with Vidant Wellness Center as part of the study.

"We are still analyzing results, but we can already make the conclusion that weight loss improved a variety of traditional risk factors for heart disease and diabetes including cholesterol, glucose and insulin," Swift said. "In addition, it improved some 'non-traditional' risk factors such as the stiffness of the arteries and fight/flight balance (autonomic function). We are still working on analyzing the weight maintenance data, but we show larger improvements in fitness in the group that did more exercise training and perhaps a greater loss in visceral fat, which is fat around the abdomen that is associated with heart disease risk."

Swift received an ECU research award in 2016. He is also a fellow of the American Heart Association.

He said the coronavirus pandemic has forced him to get creative with virtual formats to continue teaching, and he appreciates the efforts of his students, advising them to be aggressive when opportunities arise and to — of course — dream big.

"I love working with students and seeing their growth and development over the time they are in our program," Swift said.