Published: Wednesday, January 6th, 2021 @ 11:48 am
By: Carolina Journal   ( More Entries )
Publisher's Note: This post appears here courtesy of the Carolina Journal. The author of this post is Julie Havlak. 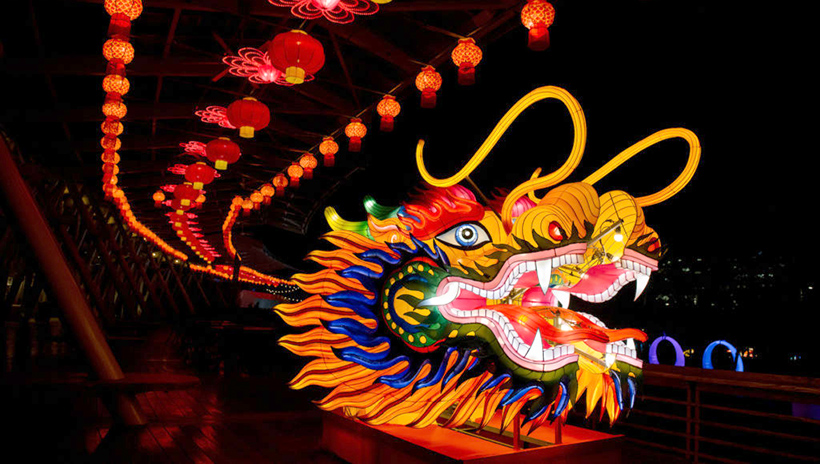 This massive dragon was one of the Chinese lanterns displayed at the 2019 festival at Cary's Koka Booth Amphitheatre. | Photo: Koka Booth

All the small details are wrong. The courtyard is too clean, and the rain has had months to wash away any traces of visitors. The trash cans are filled only with dead leaves. The air smells of warmed wood and varnish.

Humans have maintained the place, but the spiders have claimed it as their own. The water fountains are choked with leaves and grime. Spiderwebs decorate a once-vibrant stage.

The Crescent Cafe is closed. The spiders have done their work here, too. No one will be buying gingerbread or coffee spiked with Baileys. No one has bought anything here for a long time.

The rattle of leaves across the courtyard is loud in the silence.

The Koka Booth Amphitheatre was forced to cancel the Chinese Lantern Festival in Cary. After months of shutdowns, the coronavirus pandemic and the governor's capacity limits made the festival impossible. The amphitheater won't transform its grounds with glowing swans, phoenixes, dragons, and Chinese dancers.

"It's stunning," said William Lewis, manager of the Town of Cary Parks, Recreation and Cultural Resources. "It's always evolving and dynamic. The craftsmanship is extraordinary. It's something that's become a tradition for Cary."

Artists craft the lanterns in China, and another crew reassembles them at the theater. Lewis remembers watching the team build a 200-foot dragon of steel and silk. The lightbulbs alone covered the entire stage.

Lewis tried to find a way to hold the Chinese Lantern Festival. He says organizers ran through many different plans to salvage the festival, but his voice betrays him. He knew the outcome before they began. Hosting 100 people can't make ends meet for a 7,000-person venue.

The town of Cary owns the Koka Booth Amphitheatre, which was built in 2000 and named after former mayor Koka Booth. The amphitheater normally hosts more than 90 events in a given season, and it boasts a $523,081 budget. The town expected the amphitheater to draw almost 250,000 people in 2020.

"We've had to cancel festivals across the world," said Ai Luo, president of Tianyu Arts and Culture, a Chinese partner which presents the festival. "We cannot open. The upfront costs are huge. If you limit it to 100 people, there's no way we can cover the costs."

The Chinese Lantern Festival was the venue's largest revenue generator. Cancelling it was a blow after eight months of closure. The festival ran for weeks and attracted 121,654 visitors in 2019. It brought in $1.65 million, and the town of Cary netted $660,000 of the revenue.

Those funds won't trickle out into the community of artists and vendors and support staff this year.

"The arts have taken a significant hit," Lewis said. "For the hundreds of folks that we'd be dealing with in a given year, they're all idle. ... It ripples out into the community in so many different ways."

The shutdowns and the pandemic struck the core of Lewis's mission. It is now impossible to bring people together. The lanterns will wait inside warehouses in China.

"That's exactly the problem with COVID," Lewis said. "That human-to-human interaction is exactly what we're supposed to be discouraging. That makes it really difficult to find ways where people can engage with cultural arts."

As the sun sinks over the lake, it's easy to imagine how the water would have carried the light and the music. They once marooned a massive dragon in the water.

Now the only sound is a lone heron and the camera of a birdwatcher. There is so little traffic that the wind rippling the water drowns out passing cars. The nearby office buildings post leasing signs.

But the lanterns won't be gone from Cary. The theater might remain dark, but Cary's downtown will host a glowing menagerie.

Lewis borrowed Chinese lanterns from an exhibit at the Cleveland Zoo. His team overcame a series of headaches to bring the lanterns back. COVID restrictions mandate limits on gatherings, making placing the lanterns a fraught decision.

But in December, luminous silk elephants, rhinos, red pandas, and tigers will light up the downtown. The lights begin and end at Academy Street and will continue until Jan. 10.

"We didn't want to lose that energy. People love that event so much," Lewis said. "We were hopeful that if we could bring some and at least display them in Cary, we could preserve that energy."