ECU Hosts Houston in AAC Opener | Beaufort County Now | For the first time in 475 days, the ECU soccer team will get to play in the friendly confines of Johnson Stadium as the Pirates play host to Houston on Saturday at 5 p.m. 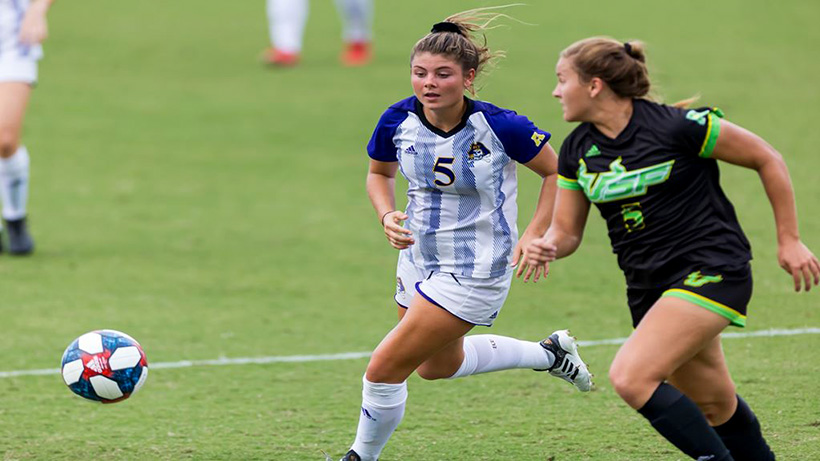 GREENVILLE, N.C. — For the first time in 475 days, the ECU soccer team will get to play in the friendly confines of Johnson Stadium as the Pirates play host to Houston on Saturday at 5 p.m.

"We are excited to get back out there and compete this week," said head coach Jason Hamilton. "We think our game last week with Old Dominion really exposed a lot of things and the team has been hard at work fixing what we need to in order to get ready. Old Dominion was a good preparation for what we will see in the AAC, they are athletic and physical which is exactly what we expect to see each week starting with Houston."

ECU (0-1-0) opened its 2020-21 season with a 1-0 loss at Old Dominion. The Pirates defense, led by Preseason All-AAC selection Kim Sanford, held Old Dominion to just seven shots, but could not find a goal themselves. Four Pirates made their debuts, including freshman Maeve English starting in the goal for ECU. English finished with three saves in her first career start. On the offensive side, ECU's returning leading scorer, Tori Riggs, took one of ECU's shots. Along with Riggs, who finished with four goals and two assists for 10 points, the Pirates also bring back Cashlin Copley (three goals and two assists), Grace Doran (three goals) and Madie Knaggs (two goals), all of whom scored multiple goals in 2019.

"We do not expect everything to be fixed in one week or that we will have a perfect game," Hamilton said. "It has been almost a year and a half off from competing, so our goal is to get better each day throughout this spring. Be more competitive, be sharper, work harder, and control the things we can control then the results will come."

Houston will be taking the field for the fourth time this spring when they line up against the Pirates. The Cougars knocked off both Houston Baptist (3-1) and Texas Southern (8-0) while also beating Rice in an exhibition. However, this will be the first time Houston has played outside of the state of Texas and the Cougars struggled on the road in 2019, going just 3-9. Jazmin Grant was named to the Preseason All-American Athletic Conference team after leading the Cougars with 20 shots on goal and delivering 11 points a season ago. Mia Brascia and Zionah Browne have been the top scorers for Houston so far, each netting two goals and an assist while Natalie Anderson and CaLeigha Callahan have two goals each.

"Houston has three games under their belt and are playing well, but conference is different," Hamilton added. "Every game has something on the line, they are usually tighter and more competitive. We have to be able to flip that switch a little sooner than we typically would in a season where we play 8-10 non-conference games in preparation for AAC play. This will be a good test of who we are as a program, a long time without competing and then one week and one game to prepare for the battle that is conference play. It is asking a lot of these young ladies, but they are just happy to out there competing again and we are excited to see them."

ECU is 11-5-1 all-time against Houston but has not beaten the Cougars since 2015. Last year, the two teams played to a scoreless draw through the first 90 minutes, but a goal by Nolin Packer in the 97th minute gave Houston a 1-0 victory. That win proved crucial as Houston finished a single point above ECU for the final playoff spot in the AAC Championship. It was the third time in four meetings that the two teams have needed extra time to separate. ECU is 4-2-1 at home against Houston, but just 0-1-1 in Johnson Stadium since joining the AAC.

Kickoff for Saturday's match is scheduled for 5 p.m., inside Johnson Stadium. The match will be streamed live through ESPN+.
Go Back