ECU Opens 2021 With Friday Doubleheader at Furman | Beaufort County Now | East Carolina will kick off its 2021 campaign a day earlier than anticipated, traveling to the campus of Furman University for a Friday doubleheader. 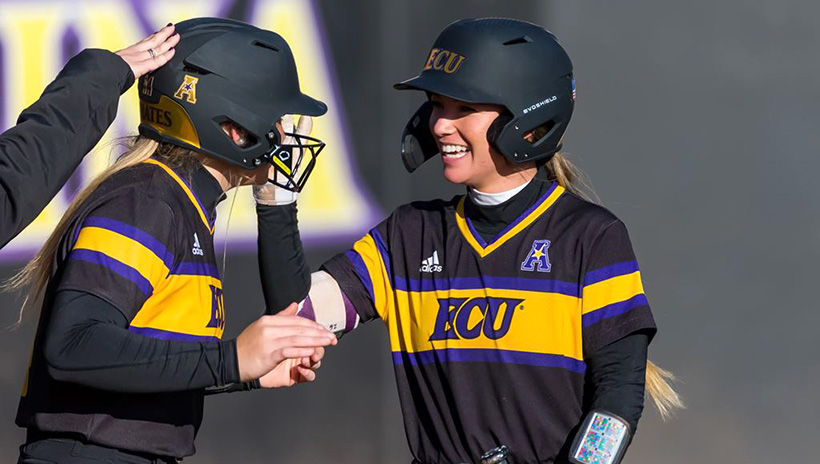 GREENVILLE, N.C.     East Carolina will kick off its 2021 campaign a day earlier than anticipated, traveling to the campus of Furman University for a Friday doubleheader. The first contest is scheduled for a 3 p.m. first pitch.

The teams were slated to play a three-game series with a single game Saturday and a doubleheader Sunday before the potential inclement weather altered things.

Both contests will be streamed live via ESPN+ with Bryant Lambert on the call.

The Pirates take the field for the first time since last March when their 2020 season was cut short due to the COVID-19 outbreak. During the shortened year, ECU compiled a 14-9 record, hit .298 as a team, posted a 3.28 earned run average and fashioned a .971 fielding percentage. The Pirates paced the American Athletic Conference in fielding percentage and was 35th nationally.

Ashleigh Inae was the top producer at the plate in terms of average (4.09) while Erin Poepping twirled a 2.29 ERA with 28 strikeouts against 11 walks in 33.2 innings pitched. Inae led the AAC in both on base percentage (.513) and assists (52) while Chandley Garner was tops in RBI (25) and Olivia Narron was tied for first in stolen bases (13).

East Carolina will also welcome back the big bat of Rachel McCollum who is currently fifth among active NCAA Division I hitters with 55 home runs. She hit .343 in 2020 with a team-high 20 runs scored and eight home runs while also contributing three doubles, two triples and 55 total bases. McCollum ranked second in the league in home runs, slugging percentage (.786) and total bases.

Logyn Estes enjoyed a solid freshman debut campaign, establishing herself as one of the top two-way players in the American Athletic Conference if not nationally. She hit .362 with 25 base knocks, seven doubles, a triple and three home runs while compiling an 8-2 record and 3.38 ERA with 29 strikeouts and 14 walks in 49.2 innings of work.

Last time the Pirates took the field, they won three of five games at the Fresno State Bulldog Classic from March 6-8, 2020. ECU knocked off UC Davis, BYU and North Dakota State. The offense exploded out in California as the Pirates hit .356 during the tournament with 38 runs scored on 53 hits, 10 doubles, two triples and five home runs against a field of NCAA regional-caliber teams.

Scouting Furman     Furman put together a 7-19 overall record in 2020 before, like the rest of the nation, the remainder of its season was cancelled due to the COVID-19 pandemic. Juniors Emily Bartlett and Natalie Morgan were tabbed to the Preseason All-Southern Conference Second Team. Bartlett, a designated player from Camarillo, Calif., started 19 of 22 games in her first year as a Paladin last season. She batted .233 and clubbed home runs versus Colgate and UAB in Furman's shortened season. Morgan, who split time between the outfield, left side of the infield and behind the plate as a sophomore, hit .288 with 11 extra base hits and 18 RBI in just 26 games 2020. The Martin, Ga., product posted a four-hit game with four runs in a victory over N.C. Central, while homering versus the Eagles, Ohio, Evansville, UAB and Colgate. The Paladins were slotted sixth of seven teams in the conference's preseason coaches poll.

The Furman Series     East Carolina is 8-11 against Furman in a series that dates back to 1986. The teams have not met since 1999 since they split a pair of games at the Rebel Spring Games in Orlando, Fla. The Pirates are 3-3 versus the Paladins in Greenville, S.C.

Up Next     Following its season-opening doubleheader at Furman, ECU will head to Coastal Carolina Feb. 19-21 for the Battle at the Beach. The Pirates will face off against Buffalo, Saint Francis (Pa.) and the host Chanticleers over five games at St. John Stadium.
Go Back