Impeachment is over, but the problems that caused January 6 are far from over | Beaufort County Now | Too many have no confidence in their government and their ability to steer it | Impeachment, causes of January 6

Impeachment is over, but the problems that caused January 6 are far from over 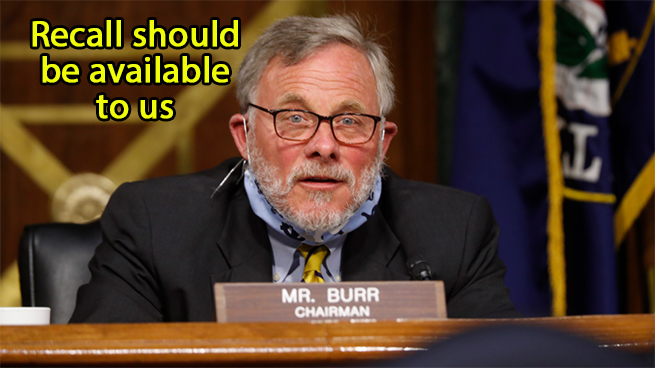 Now that the Democrats have now tried twice and failed to convict President Trump of impeachment it is time for the nation to take a step back and assess this atrocity and figure out how it can be prevented from ever happening again.  And we have a suggestion.

The states should immediately launch a process to amend the U. S. Constitution, and in North Carolina the State Legislature should do the same for the N. C. Constitution, to provide for recall of U. S. Representatives and Senators.  This is particularly true for the U. S. Senate.

Senators serve six year terms.  Representatives serve two-year terms.  Thus, a Representative can be removed in the next election by the people.  But six years is too long for the nation to wait to correct a tragedy such as we witnessed with Richard Burr voting to convict President Trump.  That is not fidelity to the people who elected him, especially since he is a registered Republican.  The Legislature should, by a super majority be empowered to submit a recall to the people for a vote within 90 days of its passage in the State Legislature.  The decision of whether to recall should rest exclusively with the People.  If recalled no official should be allowed any perks of the office, including their pension.

It is past time for We The People to take back our government from entrenched politicians who, once elected, usually do not fear the they will be held accountable for how they represent those who elected them.

If you study the tenure of U. S. Senators since the 17th Amendment was added to the U. S. Constitution in 1913, you will find that seldom does a sitting U. S. Senator who chooses to run for re-election every get defeated.  One can debate the reasons for this but the fact remains:  Elections do not hold U. S. Senators accountable for their behavior or their performance.  Absent that threat, they pretty much vote how they want, regardless of the sentiments of the people back home.

There is a compelling need for more direct democracy in our system of government.  In fact, we think all public officials should be subject to recall and moreover we believe the constitutions should be amended to guarantee the initiative and referendum.

Initiative is the process whereby the People can, via obtaining enough names on a petition have the matter submitted to the people for a vote.  Referendum is similar except it is designed to repeal a legislative action.  We need all three:   Recall, initiative and referendum.

Moreover, we believe we also need term limits, but that is an issue for another day.

These sanctimonious politicians have yelled long and hard about the “radicals” who stormed the Capitol on January 6.  The reasons were actually as numerous as those in Washington that day, but we think many of them traveled there simply because they are disgusted with the way government and those who run it operate.  They, like us, are simply fed up.  And this impeachment nonsense is not going to help change that feeling.  In fact, we fear it will grow and fester until something is done to restore American’s faith in their government.  It is not sufficient now, on either the Left or the Right.

The fact that a large percentage of Americans do not believe the 2020 elections were honest and legitimate exacerbates this alienation of We The People.  If we don’t believe our vote matters what else is there to do?

It is past time that our august salons in Washington and Raleigh wake up and address the credibility issues we have mention above.  If they don’t we fear we are headed for serious trouble in the not too distant future.  And we fear it will be much worse than on January 6.