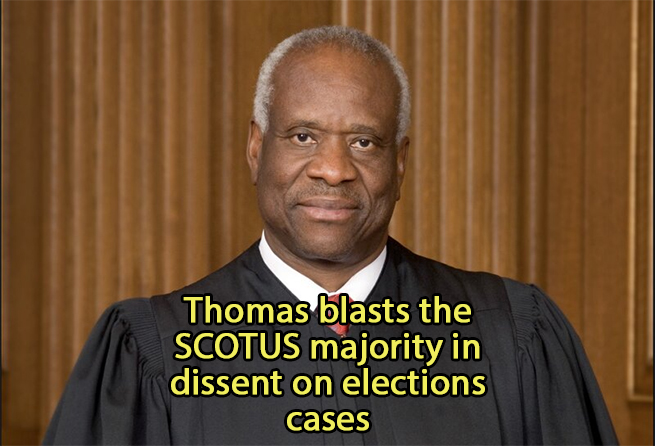 The Supreme Court on Monday struck down a Republican challenge over absentee ballots received up to three days after Election Day in Pennsylvania.

Republicans in the Keystone State had sought to block a state court ruling that allowed the Nov. 6  deadline extension in the 2020 election.

The decision prompted dissents from three conservative justices; Justices Samuel Alito, Clarence Thomas, and Neil Gorsuch. The trio argued that while the legal questions in the case may not have affected the outcome of the November election, the Supreme Court should taken the opportunity to clarify election law because the same legal issues could impact future elections.

Throughout his dissent, Thomas characterized the Court’s refusal to take cases challenging the election as “inexplicable,” “befuddling,” and “baffling.”

“These cases provide us with an ideal opportunity to address just what authority nonlegislative officials have to set election rules, and to do so well before the next election cycle. The refusal to do so is inexplicable,” Thomas wrote.

“The Constitution gives to each state legislature authority to determine the ‘Manner’ of federal elections,” Thomas argued. “Yet both before and after the 2020 election, nonlegislative officials in various States took it upon themselves to set the rules instead.”

As a result, we received an unusually high number of petitions and emergency applications contesting those changes. The petitions here present a clear example. The Pennsylvania Legislature established an unambiguous deadline for receiving mail-in ballots: 8 p.m. on election day. Dissatisfied, the Pennsylvania Supreme Court extended that deadline by three days. The court also ordered officials to count ballots received by the new deadline even if there was no evidence—such as a postmark—that the ballots were mailed by election day. That decision to rewrite the rules seems to have affected too few ballots to change the outcome of any federal election. But that may not be the case in the future.

Thomas went on to stress that “the judicial system is not well suited to address these kinds of questions in the short time period available immediately after an election,” thus the Court should have used “available cases outside that truncated context to address these admittedly important questions.”

Here, we have the opportunity to do so almost two years before the next federal election cycle. Our refusal to do so by hearing these cases is befuddling. There is a clear split on an issue of such great importance that both sides previously asked us to grant certiorari. And there is no dispute that the claim is sufficiently meritorious to warrant review. By voting to grant emergency relief in October, four Justices made clear that they think petitioners are likely to prevail. Despite pressing for review in October, respondents now ask us not to grant certiorari because they think the cases are moot. That argument fails.

One wonders what this Court waits for. We failed to settle this dispute before the election, and thus provide clear rules. Now we again fail to provide clear rules for future elections. The decision to leave election law hidden beneath a shroud of doubt is baffling. By doing nothing, we invite further confusion and erosion of voter confidence. Our fellow citizens deserve better and expect more of us. I respectfully dissent.

In his dissent, which Justice Neil Gorsuch joined, Alito argued that the cases “present an important and recurring constitutional question: whether the Elections or Electors Clauses of the United States Constitution… are violated when a state court holds that a state constitutional provision overrides a state statute governing the manner in which a federal election is to be conducted. That question has divided the lower courts,* and our review at this time would be greatly beneficial.”

“Now, the election is over, and there is no reason for refusing to decide the important question that these cases pose,” Alito wrote. While a decision in these cases “would not have any implications regarding the 2020 election,” it would “provide invaluable guidance for future elections.”

Alito also rejected the argument that the decision only arose from the ” extraordinary and unprecedented confluence of circumstances” of the COVID-19 pandemic and that “such a perfect storm is not likely to recur.”  He wrote that the argument fails for three reasons. First, that it does not acknowledge the breadth of the Pennsylvania Supreme Court’s decision which used a constitutional provision guaranteeing “free and equal elections” to “override even very specific and unambiguous rules adopted by the legislature for the conduct of federal elections.”

Alito noted that “in order for a question to be capable of repetition, it is not necessary to predict that history will repeat itself at a very high level of specificity.”

Second, the suggestion that we are unlikely to see a recurrence of the exact circumstances we saw this fall misunderstands the applicable legal standard. In order for a question to be capable of repetition, it is not necessary to predict that history will repeat itself at a very high level of specificity. See Federal Election Comm’n v. Wisconsin Right to Life, Inc., 551 U. S. 449, 463 (2007).

Third, it is highly speculative to forecast that the Pennsylvania Supreme Court will not find that conditions at the time of a future federal election are materially similar to those last fall. The primary election for Pennsylvania congressional candidates is scheduled to occur in 15 months, and the rules for the conduct of elections should be established well in advance of the day of an election. We may hope that by next spring the pandemic will no longer affect daily life, but that is uncertain. In addition, the state court’s decision was not based solely on the pandemic but was also grounded in part on broader concerns about the operation of the Postal Service, App. to Pet. for Cert. 34a– 35a, 47a, and concerns of this nature may persist or resurface. As voting by mail becomes more common and more popular, the volume of mailed ballots may continue to increase and thus pose delivery problems similar to those anticipated in 2020.

“For these reasons, the cases now before us are not moot,” Alito concluded.