Lest we forget: McConnell’s Swamp is still there 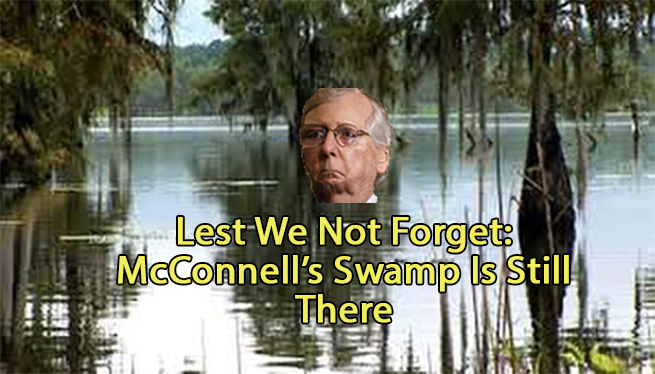 Hind sight is 20/20.  Looking back over the past four years of the Trump administration, what did we gain?  Almost nothing in terms of draining the swamp.  However, we now have a crystal-clear view of what we are dealing with.  The final 30 days of Donald J. Trump’s presidency were sobering, startling, eye opening, and finally clearly separated the true swamp creatures from honest men.  A lot of the creatures who were about to bust, sucking in their lies, could hold it no more. They made astounding statements that pointed directly to their true character and moral values.  Their RINO DNA reverse metamorphosed those swamp butterflies into worms.

Mitch McConnell, a nominal Republican, turned on Donald Trump the instant Trump lost power, proving his duplicity. McConnell tried to straddle the fence.  McConnell voted not to impeach Trump, but immediately said that Trump was guilty of inciting the Capitol Hill riots.  Translation:  McConnell signaled Joe Bien and others that he had returned to the swamp.  He could not afford to vote to impeach Trump because his vote would have encouraged other swamp Republicans to vote against Trump.  Impeachment would have caused a revolution within the Republican party and destroyed McConnell’s fund-raising base.  McConnell’s vote was not about principle, or conservative politics, it was about money.  Swamp creatures like McConnell worship at the foot of the money tree. Money, not principle, is where their personal and political power comes from.

As Republican minority leader in the US Senate, McConnell has the ability to raise huge sums of money, maybe up to one hundred million dollars in an election cycle.  This money is used to elect Republican Senators.

I first suspected McConnell of being something other than a “Republican” when he directed huge sums of money, some say as much as eight million dollars, into the campaign to defeat Judge Roy Moore during his Alabama Senate race in 2017.  No doubt Judge Moore was a controversial character but he was well respected when it came to conservative principles.  He was well known not to back down.  These two characteristics, strong conservative and having aback bone, do not fit with a manipulative swamp creature like McConnell.  In order to be a McConnell team player you have to take orders to make the deals over money and influence work.  Doing the right thing does not fit with Mitch McConnell.  So Judge Roy Moore had to go.  McConnell sacrificed Judge Roy Moore and a Democrat won the Senate seat.

McConnell has never presented himself as a true conservative.  He does not take the lead on anything.  McConnell slinks around, manipulating the players, and then, only when he is in an advantageous position does he go public.  Therefore, he always appears to be a winner.  But, what does he really stand for?  The best answer is the Washington swamp and himself.

Don’t think for a minute that the swamp creature club does not know how the money is divided, who gets what and whose relatives get the rake off.  Basically all of Washington is run on corruption.  The Democrats and Republicans share power regardless of who gets the most votes on elections day.  McConnell will be a great asset for Biden.Both Biden and McConnell have served 36  years together in Washington DC politics.

Almost all of those lawyers at the Justice Department have worked “off and on” for the big defense contractors and other companies with government interests.  They were paid millions.  The Justice Department is a revolving door for this kind of, at best, unethical behavior.   Having lawyers in the right places at the right times make defense and government contracts work really well.  These guys are well suited for McConnell and his swamp.

At any other time in our history Senator Mitch McConnell would be considered a serious national security risk.  It is reported that his wife has family in Communist China with close enough ties to the Communist Chinese Government to own a ship building company.  One does not own anything in China without supporting the Communist dictatorship.  It has been reported  that McConnell’s wife is part owner of the ship building company.  With community property laws within marriages being what they are in the United States, does that make McConnell part owner of a Communist Chinese company?

Living in McConnell’s swamp, there is North Carolina’s own Senator Richard Burr.  Burr claims to be a pure conservative Republican.  But, he was accused of trading stocks illegally about one year ago.  Even before the stock trading accusations Burr never acted like a conservative.  In his position as Chairman of the Select Senate Committee on Intelligence during the first three years of the Trump administration, Burr never stepped forward to defend President Trump.  He occupied a key position on the Intelligence Committee to be able to expose the corruption of Hillary Clinton paying for the creation of the information used by the FBI to make so much trouble for Trump.  He hung back like a coward.  After the Justice Department investigation started for the selling of stock on insider information, there was no hope Burr would ever do anything to help Trump.  Surprisingly Burr was released of the stock selling charges by the corrupt Justice Department about the time he voted to impeach Trump.  Burr, just another swamp rat enjoying his payoffs.

Do not think for one minute that McConnell has not known for a long time all about the dealings of the Biden family with Communist China?

Because of these Communist China dealings, politics will swim along smoothly among Biden, McConnell and almost all of the swampy Republican Senators for at least the next two years.   If we can elect enough independent, honest people to the House of Representatives and the Senate during the 2022 elections we stand a chance of laying the ground-work for the return of Donald J. Trump in 2024.

The people elected in 2022 must have the honesty and courage to stand up to the McConnell swamp creatures, to say “no” and not waver.  These people along with the 75 million Trump voters can hold the fort until Trump can get re-elected in 2024.

My point in all of this is that McConnell and most of the US Senate are unfit in one form or another to serve. Whomever we elect to fill the Burr vacancy should be a true rock-ribbed conservative Republican.  We cannot afford the greed and dishonesty any longer.

Success in the political future of the United States is based on improvement in free and fair elections with progress being made on the meaningful reduction of election fraud.