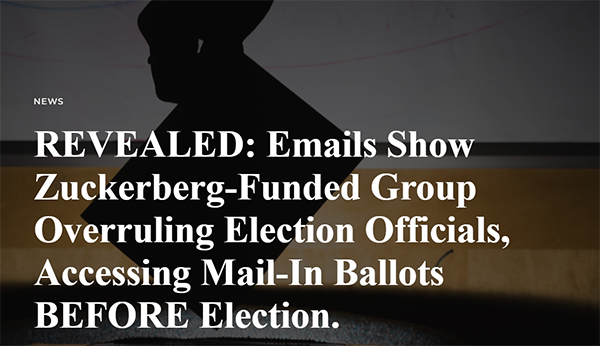 The National Pulse is reporting:

Emails and documents obtained by the Wisconsin Spotlight allege that individuals affiliated with Mark Zuckerberg’s Center for Tech and Civic Life took control of election procedures, including giving left-wing advisers “access to boxes of absentee ballots before the election.”

In new, bombshell revelations, investigations reveal the $1.6 million spent in the city of Green Bay led to the “infiltration of the November presidential elections by liberal groups and Democratic activists,” according to the group.

The Zuckerberg-funded Center for Tech and Civic Life (CTCL) placed Michael Spitzer-Rubenstein as the city’s point man for the organization’s effort in the Wisconsin city, who has previously worked for Democratic candidates and interned for a “fiercely liberal” Democrat from the New York City Council.

He attempted to assist Green Bay election officials in “curing” absentee ballots that were returned to the city clerk due to errors in inaccuracies.

“Can we help with curing absentee ballots that are missing a signature or witness signature address?” he wrote to Green Bay city clerk, Kris Teske in an Oct. 7 email.

offer, the office of the city’s Democratic mayor applied pressure.

“The grant mentors would like to meet with you to discuss, further, the ballot curing process. Please let them know when you’re available,” Mayor Eric Genrich’s Chief of Staff demanded of the city clerk.

On the ground, emails reveal local officials “growing frustration with the mayor, his chief of staff, the city’s ad hoc elections committee, and the nonprofit interlopers who were making themselves at home in Green Bay election administration.”

“As you know I am very frustrated, along with the Clerk’s Office. I don’t know what to do anymore. I am trying to explain the process but it isn’t heard. I don’t feel I can talk to the Mayor after the last meeting you, me, Celestine, and the Mayor had even though the door is supposedly open,” the city clerk wrote to Green Bay Finance Director Diana Ellenbecker in late August.

“I don’t understand how people who don’t have knowledge of the process can tell us how to manage the election,” the city clerk added before revealing her staff members were wanting to quit and felt “ignored or bullied” by the Mayor’s office.

“Eventually, Teske could take no more. On October 22, she wrote in an email she was taking a leave of absence. By the end of the year she had officially resigned to take a similar position with the nearby community of Ashwaubenon,” Wisconsin Spotlight notes, adding that in her absence, CTCL’s “Spitzer-Rubenstein and his team ramped up their involvement in the upcoming election, leading just about every aspect of Green Bay’s election administration.”

“The KI Convention Center at Green Bay’s Hyatt Regency was where the election team decided to locate the city’s Central Count and where the absentee ballots were stored, late in the game. Central Count originally was to be at city hall, but space limitations and COVID-19 concerns forced the move to the convention center. At one point, a city official, after talking with a representative from the National Vote at Home Institute, was “brainstorming” about how the city could livestream Central Count at city hall “so that (election observers) do not enter the building,” the Wisconsin Spotlight adds.

A County Clerk added that Spitzer-Rubenstein would have four of the five keys to the KI Center’s ballroom “several days before the election” before informing the Wisconsin Elections Commission that she believed the Central Count location was “tainted by the influence of a person working for an outside organization affecting the election.”