Homosexuality is a sin...because the Bible says so | Beaufort County Now | The Catholic Church is actually just stating the obvious interpretation of God's Word. Beware of the media spin

Homosexuality is a sin...because the Bible says so 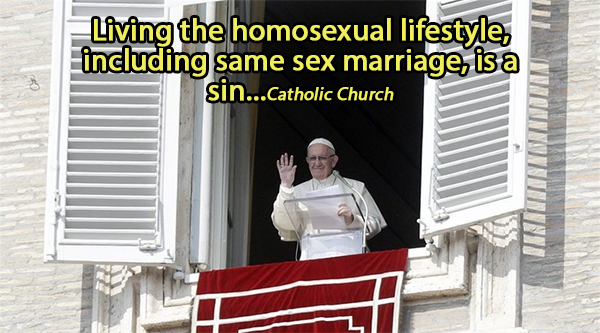 The Roman Catholic Church has finally caught up with the clear thinking of North Carolinians who believe that marriage is a union between one man and one woman.  We know that because nearly two-thirds voted to approve a Constitutional Amendment that said just that.

On Monday, the Vatican reaffirmed the Roman Catholic Church’s 2,000-year-old doctrine that marriage is between one man and one woman and that homosexual acts are illicit. Therefore, the Vatican stated that the church cannot bless same-sex weddings because that would lead to confusion about the doctrine of marriage.

This should not surprise anyone with a basic familiarity with historic Christianity or with the Roman Catholic Church. The New Testament clearly condemns homosexual activity and Jesus explicitly affirmed the teaching of Genesis that marriage is between one man and one woman. The Catholic Church has a 2,000-year tradition of upholding this basic definition of marriage that, in historical terms, only came under fire yesterday.

Yet legacy media outlets reported the Vatican’s decision as if it were new and shocking. “BREAKING: The Vatican decrees that the Catholic Church cannot bless same-sex unions since God ‘cannot bless sin,'” the Associated Press tweeted. “Pope Francis says priests cannot bless same sex unions, dashing hopes of gay Catholics,” ran The Washington Post’s headline. CNN’s report described the Vatican’s statement as “combative,” warning that the move “threatens to widen the chasm between the church and much of the LGBTQ community.”

The legacy media and many American and global institutions have rushed to embrace the hyper-charged sexual revolution of recent years, a revolution that weaponizes the language of “tolerance,” equates same-sex relationships with marriage, hints at polygamy, pushes nebulous gender identity over biological sex, and demonizes dissent from this agenda as “bigotry.”

Activists have targeted churches, seeking to infiltrate Christian institutions and alter their doctrines. As Reuters reported, some parishes and ministers in Germany and the United States have begun blessing same-sex unions in lieu of marriage, sparking calls for bishops to institutionalize these blessings. Media outlets have breathlessly reported Pope Francis’ every garbled statement on the issue, suggesting that the Catholic Church was on the brink of overhauling its 2,000-year doctrine, even though many popes have spoken ex cathedra on the issue — and popes speaking ex cathedra are considered infallible, according to Catholic doctrine.

Both before and during his papacy, Pope Francis has endorsed the idea of state protections for civil unions. He has also emphasized the dignity of all people, including those who identify as homosexual. “Homosexual people have the right to be in a family. They are children of God,” he said.

Yet Francis’ occasional hints should not give reporters and Catholics false hope that the church will flip its marriage doctrine on its head.

The Congregation for the Doctrine of the Faith, the Vatican body that enforces orthodoxy, issued the ruling against church blessings of same-sex unions on Monday, citing many of the church’s previous statements on the issue.

The statement acknowledged that priests who seek to bless same-sex unions “are not infrequently motivated by a sincere desire to welcome and accompany homosexual persons.” Yet the Catholic Church considers blessings to be “sacramentals,” “sacred signs that resemble the sacraments.” The seven sacraments are God’s way of providing grace to His people, according to Catholic doctrine. Marriage is one of the sacraments.

“When a blessing is invoked on particular human relationships, in addition to the right intention of those who participate, it is necessary that what is blessed be objectively and positively ordered to receive and express grace, according to the designs of God inscribed in creation, and fully revealed by Christ the Lord,” the statement explained.

“For this reason, it is not licit to impart a blessing on relationships, or partnerships, even stable, that involve sexual activity outside of marriage (i.e., outside the indissoluble union of a man and a woman open in itself to the transmission of life), as is the case of the unions between persons of the same sex,” the statement explained. While the Vatican acknowledged “the presence in such relationships of positive elements, which are in themselves to be valued and appreciated,” it nonetheless firmly declared that such relationships cannot be blessed with a sacramental blessing.

“The blessing of homosexual unions cannot be considered licit,” but not as “a form of unjust discrimination” against homosexuals — as activists claim — but because of the church’s doctrine.

“The Christian community and its Pastors are called to welcome with respect and sensitivity persons with homosexual inclinations, and will know how to find the most appropriate ways, consistent with Church teaching, to proclaim to them the Gospel in its fullness,” the Vatican added.

The Vatican report explained that the ban on same-sex union blessings “does not preclude the blessings given to individual persons with homosexual inclinations” so long as they show the will to live in accordance with God’s plan expressed in the church’s teaching.

Why did CNN describe this report — full of caveats expressing hope and encouraging support for people who identify as homosexual — as “combative”? The Vatican described the homosexual lifestyle as a “choice.”

The Vatican’s report argued that any sacramental blessing on same-sex unions “would manifest not the intention … to approve and encourage a choice and a way of life that cannot be recognized as objectively ordered to the revealed plans of God.”

CNN twisted these words, claiming the Vatican had called “homosexuality a ‘sin’ and a ‘choice.'” The report did not describe homosexual orientation as a “sin” or a “choice,” but rather the homosexual “way of life” in those terms.

Perhaps these news outlets should acquaint themselves with Catholic doctrine and the actual words of the document on which they reported. The Vatican’s decision is not new or shocking, but the legacy media’s reaction to it has proved tragically revealing. Rather than seeking to understand why the Catholic Church continues to uphold its teaching, journalists appear to have enlisted as LGBT activists, reporting this humdrum development as if it were a shocking reactionary move.

This bias helps explain why so much of the legacy media brushes aside serious religious freedom concerns that follow in the wake of LGBT policy, and why outlets continue to cite the scandal-plagued smear factory the Southern Poverty Law Center, which brands mainstream conservative Christians as “hate groups” alongside the KKK.