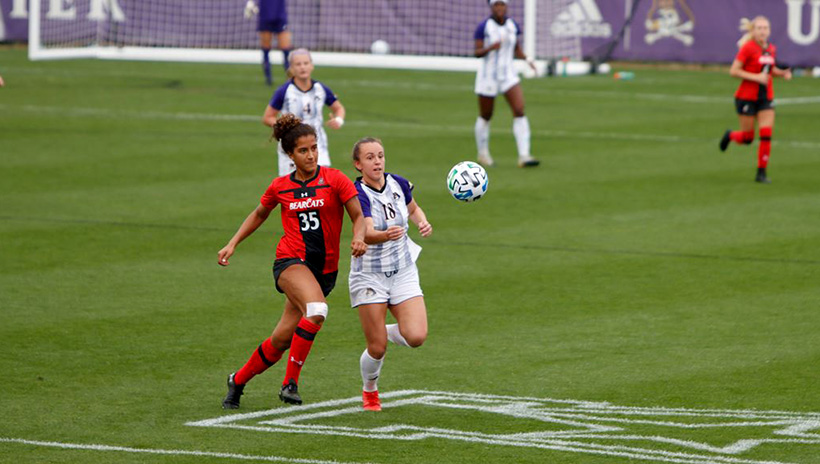 "All the credit to Cincinnati, they deserved to win that one," said head coach Jason Hamilton. "They out worked us and took advantage of two set pieces. Exactly what we expected from them. We just didn't execute what needed to be done to get the result we needed."

Neither team had many chances in the first half, but the Bearcats made theirs count. In the 16th minute, the Bearcats earned their first corner kick of the match. Taylor Nuncio swung a cross in and Alli Pestaina headed the ball down into the middle of the ECU box. Annie Metzger was the first to reach it and she lifted a shot into the ECU goal to open the scoring.

The Pirates nearly got level just three minutes later. A cross from the left side got to Parker inside the Cincinnati penalty area, but Parker's first-time effort went just outside the goal post.

Still trailing 1-0, the Pirates came out of the halftime break looking to get back into the game. It looked like East Carolina had gotten the goal it was looking for in the 49th minute. First Annabelle Abbott nearly scored, but her effort from close range hit the inside of the post and bounced back into the six-yard box. Parker was there for a follow up and put the ball into the back of the net, but the play was ruled out for offsides.

Despite the momentary setback, ECU kept attacking and the breakthrough came in the 53rd minute. Pressure from the Pirates caused a Bearcat turnover inside their own half. Parker latched onto the ball and got the ball onto her left foot at the top of the box. The senior used the space to let loose a shot and it snuck just inside the post for the game-tying goal. It was the fourth goal of the season for Parker and the third in the past two games.

With an important three points on the line, both teams wanted the next goal. Each team had a chance, with Parker forcing Cincinnati goalkeeper Anna Rexford into a save while ECU netminder Maeve English had to punch a long-range effort from Sophie Gorman over the crossbar.

It was another set piece goal for Cincinnati that turned out to be the difference. Nuncio took another corner kick for Cincinnati and although the Pirates cleared the initial danger, it was only as far as Nuncio who was at the top of the box. Nuncio tried a curling effort that English made a diving stop on, but the rebound fell to Pestaina who finished from close range.

East Carolina tied the game from a similar 2-1 deficit last week at SMU and tried to do the same this week, including getting a corner kick in the 88th minute, but the Pirates could not find the game-tying goal.

"It's a tough one because there was so much on the line," Hamilton said. "We knew what we needed to do and didn't get it done. Now we have two games left and still have to get some results to have ourselves in the mix for the top four and a spot in the conference tournament."

Cincinnati held a 13-6 edge in shots and a 7-5 advantage in corner kicks. English made a trio of stops for the Pirates while Rexford made one stop for the Bearcats.

"We are home next weekend and have to have a better performance if we want to have a chance," Hamilton added. "I know they want it so I am sure we will see them have a lot of energy this week leading to the game."

The Pirates will play their final home game of the season next Saturday evening. ECU will host Tulsa in Johnson Stadium with the contest getting started at 5 p.m.