Elon Splits Series With No. 8 ECU, 2-1 | Beaufort County Now | Spencer Bauer and Brian Edgington combined to strike out 14 as Elon picked up a weekend series split after earning a 2-1 win over No. 8 East Carolina Saturday afternoon 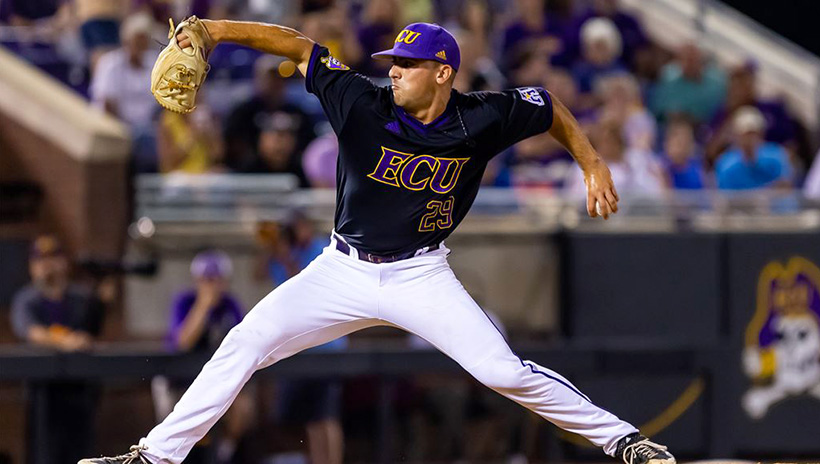 ELON, N.C.     Spencer Bauer and Brian Edgington combined to strike out 14 as Elon picked up a weekend series split after earning a 2-1 win over No. 8 East Carolina Saturday afternoon at Latham Park. With the win the Phoenix improves to 6-10 while the Pirates drop to 17-5.

Bauer (1-1) tossed a season-high five innings allowing one run (earned) on four hits with a walk and a career-best eight strikeouts. Brian Edgington notched his first save after working four scoreless frames where he gave up four hits, walked one and fanned six.

Trailing 1-0 heading to the home half of the fourth inning, Elon put up a pair of runs taking its first lead of the two-game set, 2-1. Cole Reynolds led off with a single to right field and Nick Cicci deposited the first pitch he saw from Jake Kuchmaner in the frame over the left field wall for his second round tripper of the season.

Kuchmaner (2-1) suffered his first loss of the season surrendering two runs (both earned) on five hits with six strikeouts. The lefty fanned a pair of batters in the second and sixth innings and had one in each of the third and fifth stanzas. C.J. Mayhue, who appeared in his team-leading 12th game, worked two perfect innings registering three strikeouts to push his season total to 32 over 23.0 innings.

ECU plated the game's first run in the fourth inning thanks to Alec Makarewicz' sixth double of the season for a 1-0 lead. Seth Caddell, who had two hits on the day, doubled off the left field walk with one out and came around to score on Makarewicz' two-base hit.

The Pirates had their chances to scratch across a couple more runs in the game as they had runners in scoring position in the second, third, fourth, sixth and eighth, but the Phoenix pitching duo got out of the jams leaving runners stranded on base.

Caddell and Makarewicz led the Pirates offensively with two hits apiece, while Thomas Francisco, Josh Moylan and Connor Norby each added one. Francisco (22) and Norby (29) extended their on-base streaks with their base hits on the afternoon.

ECU returns home for the first of nine-straight games at Clark-LeClair Stadium over the next two weeks. The Pirates will host in-state foe No. 24 North Carolina on Tuesday, March 30 followed by American Athletic Conference series against Cincinnati (April 1-3) and Memphis (April 9-11). First pitch on Tuesday is slated for 6:30 p.m. (ET) and will be streamed on ESPN+.
Go Back