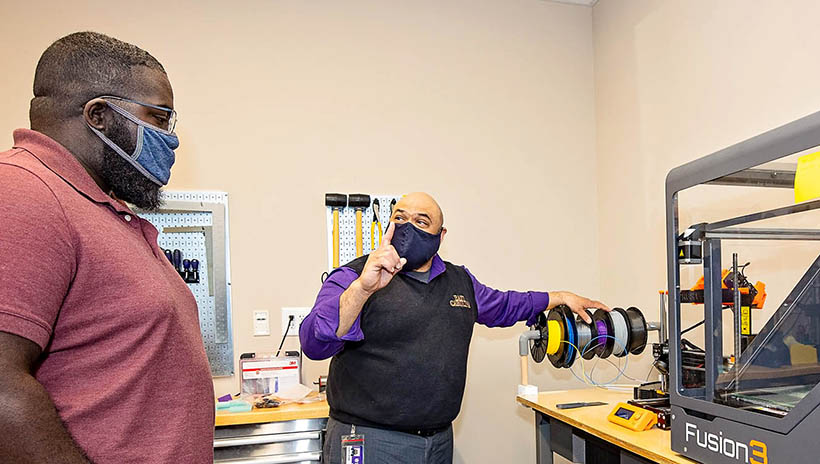 This spring, East Carolina University undergraduates taking a 4000-level research course in African and African American Studies (AAAS) are learning how their history and diverse, interdisciplinary research interests may help others in the future.

"Being able to have these [research] opportunities, where faculty can reach across our different divisions and support all of our students, is a wonderful opportunity," said Dr. Crystal Chambers, professor of educational leadership in the College of Education, who teaches the course. "I typically teach graduate students, so watching undergraduates who are blossoming and getting ready to step into the 'real world' is really rewarding for me."

Kayla Jones, who is pursuing dual degrees in AAAS and English literature with a minor in leadership studies, will graduate in May.

Jones said she chose to pursue a second major in AAAS because she believed the program would help her become a well-rounded student and set her apart as a future law school applicant.

"The AAAS program helped to diversify my education by exposing me to different classes and types of learning, and introduced me to professors and peers that I benefited learning from and helped to challenge many of my personal perspectives," Jones said.

In his theory, Rawls describes a society of free citizens having equal basic rights and cooperating within an egalitarian economic system. The original position, often referred to as the veil of ignorance, is a thought experiment he developed to discover the principles that should structure a society of free, equal and moral people. Ideally, he said this would force participants to select principles impartially and rationally.

"I'm excited because I am completely ignorant to this topic," Jones said. "I have no biases or prior opinions, so I'm open to all sides and look forward to the final opinions/results that I'll take away from this research."

Beginning in the fall, Jones plans to attend law school. Her goal is to become a prosecutor and later a district attorney. 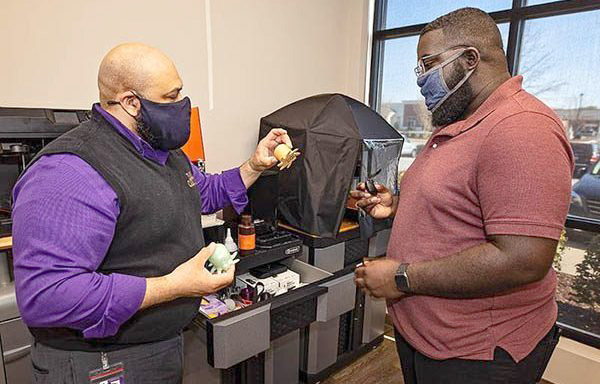 Moore, left, shows Speight a 3D printed piece made from wood chips at the CSTEM Building on W.H. Smith Boulevard.
"One of my biggest desires is to open group homes across the country for at-risk youth," Jones said. "By providing these positive environments, I will be cutting down on recidivism rates for juvenile offenders and combatting the school-to-prison pipeline. Not only will shelter be provided, but I would like to pay for their education, whether they decide to pursue a post-secondary education or go into trade school."

Timothy Speight is pursuing degrees in psychology and AAAS. He will graduate in December and wants to continue his education in mortuary science to become a licensed mortician.

Speight said the reason he wanted a second major in AAAS was to learn more about his culture.

"Growing up in a small town, we didn't learn much about our history, compared to American history. We spent a day reviewing, then moved on to other lecture material," he said. "It's helping diversify my education because now I feel that I know something from each aspect of history in this world."

Speight's senior research project under the mentorship of Dr. Shawn Moore, director of the ECU Center for STEM Education, focuses on the underrepresentation of minority faculty, women and students in biomedical and medical sciences.

"I love that with this research project we are including diversity, and not just spending time on one subject but looking at multiple [aspects]," Speight said.

Faith Harr is majoring in psychology and AAAS, with a concentration on Africa. She will graduate in May and wants to pursue a master's and doctoral degrees in clinical psychology.

"I chose AAAS as a second major because I wanted to get to know a history that is not taught in K-12," Harr said. "Also, I would like to gather contextual information - both historical and modern - to help me with my life and career goal to provide mental health care to Black communities and communities of color."

As an African American woman, Harr said the AAAS program has provided her with new frameworks and perspectives she had not previously considered. 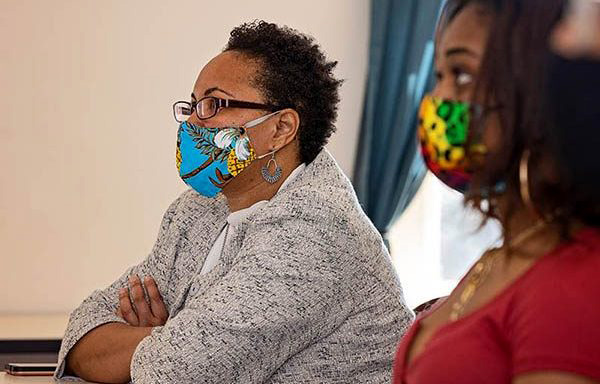 Dr. Crystal Chambers, left, in Ragsdale with her students, Jayla Bullock and Kayla Jones, listen to speakers presenting information about nutrition and sociology.
Jayla Bullock is majoring in psychology with a minor in AAAS and plans to graduate in 2022. Her future goals include shining a light on mental health and becoming a therapist in her community. She feels minorities may not reach out for help because of underrepresented in the field.

"I chose to minor in AAAS because I found myself more interested in my culture and history - my full history - not just what we are taught in grade school," Bullock said. "I feel that minoring in AAAS is helping me know how to mentally help African Americans."

Under the guidance and mentorship of Dr. Yolanda Holt, associate professor in the Department of Communication Sciences and Disorders in the College of Allied Health Sciences, Bullock and Harr are taking the preliminary research steps for one of Holt's studies.

"I most enjoy guiding students to see their own potential and believe they have the requisite skills to successfully pursue their academic and professional goals," Holt said.

"AAE has specific rules that allow for variation in the production of words compared to both Southern or general American English," she said. "For example, AAE allows for final consonant cluster reduction so the word 'next' can be produced as 'neks.' Similarly, final consonant reduction or deletion can result in the words 'back' and 'bag' both sounding like 'baa' - where the vowel is longer, and the final consonant sound is not fully produced."

Bullock and Harr will provide data to educators and the public on the competent use of AAE. Their goal is to develop a rubric to qualitatively and quantitatively describe an excellent and a poor narrative produced by child speakers of both southern and African American English. They will report on the methods, results and future directions.
Go Back