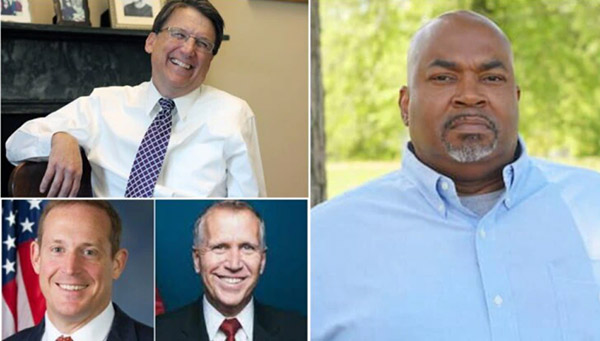 The rising star in North Carolina GOP politics is undoubtedly Lt. Gov. Mark Robinson, the gun rights activist who defeated the political establishment to obtain his position as the first black Lt. Governor in the state.

Big League Politics has reported on how Robinson has fearlessly called out the Left on their racism against the black community. He is being suggested frequently among the conservative grassroots as a likely candidate for governor in 2024. This has the North Carolina RINO brigade panicking and scrambling to derail Robinson’s momentum.

Enter Congressman Ted Budd, who is now rumored to be running for the U.S. Senate next year, aiming to replace the retiring Sen. Richard Burr. He put out feelers in an email released to supporters on Friday teasing a potential run.

“A lot of folks in North Carolina have asked me if I will run for the U.S. Senate seat in 2022. I believe we need more leaders in Washington who aren’t afraid to stand up to the radical Left or protect our conservative values,” Budd wrote in an email, adding that his family is “thinking and praying about this decision.”

Budd’s entry into the race would all but surely split voters away from conservative favorite, former Congressman Mark Walker. Walker has been campaigning for the U.S. Senate since officially announcing his candidacy in Dec. 2020.
Enter former Governor and establishment favorite Pat McCrory.

This “divide and conquer” strategy has been used in the past with great effectiveness by political consultant Paul Shumaker, whose plotting helped to put not only Burr in office, but also RINO Sen. Thom Tillis.

Shumaker worked with Robin Hayes, a former N.C. Republican Party chairman who pleaded guilty to lying to the FBI in a bribery case, on a similar plan during the 2014 Republican primary for U.S. Senate.

Grassroots conservative favorite Dr. Greg Brannon had his hopes dashed after Pastor Mark Harris entered the race as a spoiler, splitting the conservative vote and thereby giving the nomination to Tillis.

Now, Shumaker and the Republican establishment in North Carolina appear poised to execute this strategy once more, to the benefit of Pat McCrory, and at the expense of conservative voters.

McCrory is considered a RINO who duped tea party constituents on the campaign trail in order to ride that wave into office; only he failed completely to live up to this conservative mandate before ultimately being rejected by the voters.

McCrory lost a state-wide race to Roy Cooper in 2016 by a narrow margin and the state GOP still has not recovered.

During his time as Mayor of Charlotte, McCrory supported massive spending increases on transportation boondoggles and massive corporate welfare spending under the guise of economic development. His critics blame McCrory for ruining the GOP in the city forever, disenfranchising countless conservatives with his poor leadership.

“McCrory did more to damage the Republican brand than any politician that’s ever been in Charlotte,” said former Charlotte city councilman Don Reid. “He joined the Uptown crowd and did their bidding. When he took over as mayor, he had a Republican majority, and he drove that right down the drain. … During his terms in office, the Uptown business interests took control, and Pat McCrory was their main helper. Everything had to be downtown; heck, they’d move the Whitewater Center downtown if they could shift the river.”

Even though he changed his tune a bit after the tea party’s sudden and unexpected insurgency within the GOP, McCrory governed the same way in Raleigh as he did in Charlotte.

McCrory pushed for a massive $2 billion bond after touting his record as a fiscal conservative with ties to the Koch Brothers on the campaign trail. He protected Common Core by appointing globalists to a state-mandated council reviewing those troublesome standards.

McCrory implemented an unpopular toll road boondoggle, dooming his re-election chances and hurting Republican candidates across the state. He also joined liberals in slamming the Confederate Flag, which set the stage for Black Lives Matter marxists to gain momentum in their revolution against the Bill of Rights and Constitution.

McCrory is long-time political crony of Tillis, who was one of former President Donald Trump’s worst enemies in the senate.

While Budd possesses an ostensibly conservative voting record, his ties to Tillis’ crony circle are also extensive. Budd’s gushing over Tillis, calling him a “great conservative voice for North Carolina” after years of publicly opposing Trump, in a recent Zoom call tells the whole story.

Budd lied to voters last year on the campaitrail by claiming that Tillis was a “strong supporter of President Trump and will always have the back of North Carolina families.”

He even offered up his wife to shill for Tillis as the latter struggled to win re-election after years of terrible votes. The groveling intensified throughout the campaign and Budd worked overtime on behalf of one of the state’s most despicable anti-Trump RINOs.

Budd’s odd path to Congress in 2016 may explain his motives. He won the Republican primary with only 20 percent of the vote as one of seventeen candidates, narrowly beating proven conservative state legislator John Blust. This is when the NCGOP establishment swooped in and cultivated Budd as an asset.

Hayes, the aforementioned former NCGOP chair turned felon, was an early supporter of Budd, giving his campaign thousands of dollars, holding a fundraiser on his behalf and undoubtedly working his deep special interest connections to benefit his candidacy.

Sources within the North Carolina GOP have informed Big League Politics about a plot to run Budd as controlled opposition in the Senate race in order to thwart two constitutional candidates.

The plan, we’re told, is to run Budd in a doomed U.S. Senate race in order to increase his statewide name recognition and sabotage Walker’s chances in the primary, allowing McCrory to be the GOP’s hand-selected Senate contender in 2022.

Having just spent a year and a half campaigning across the state, Budd would then be the establishment’s pick for governor in 2024, thwarting Lt. Gov. Robinson’s potential run for the spot.

This scheme is what sources allege is being hatched to keep the party under RINO control, disrupting the America First uprising among their ranks, even if it means losing more winnable races to Democrats.

Why else would Budd give up a safe seat in Congress to launch an extremely competitive bid for U.S. Senate, in a crowded field, which includes a conservative Congressman who has been campaigning for months, as well as a former governor likely jumping in the mix?

If this sort of scheme seems far-fetched, just consider what the NCGOP has done to derail upstart anti-establishment Republicans in recent years.

In the not-too-distant past, the NCGOP destroyed a rising black political superstar, damning the party among minority voters, and giving ammo to the liberal media to paint the GOP as racists. All to keep their stranglehold over power.

This was the case with Hasan Harnett, former NCGOP chairman. Like Robinson, he defeated the political establishment, but was then sabotaged, and subsequently booted from his post against the will of the Republican delegates.

The state GOP’s Executive Committee met in private and booted Harnett months after he was elected fairly by Republican delegates to serve as party chair. They ousted Harnett while he was out of town and unable to defend himself.

This was the culmination of a diabolical sabotage campaign that was hatched on the day Harnett won election. Harnett’s push to lower registration fees to open up conventions to more Republicans was picked, framed and polarized to promulgate the phony crisis needed to get rid of Harnett.

The establishment then installed one of their own as Harnett’s replacement, none other than one of Ted Budd’s earliest financial benefactors, Robin Hayes. This conspiracy against Harnett was spearheaded in many ways by former NCGOP executive director Dallas Woodhouse. Interestingly, Woodhouse recently promoted Budd’s possible candidacy in the Carolina Journal, firing up the rumor mill and the aforementioned email from Budd to supporters on the same day.

Although the rise of Donald Trump as the unquestioned leader of the GOP has glossed over much of this ugliness, the North Carolina Republican establishment is working to backslide into the “good ol’ days” of Bush-era, where leaders are selected, not elected. As such, this upcoming Senate race will ultimately determine whether or not the NCGOP is America First or under the thumb of self-serving RINOs.