Multiple states move ahead on bills to insure election integrity 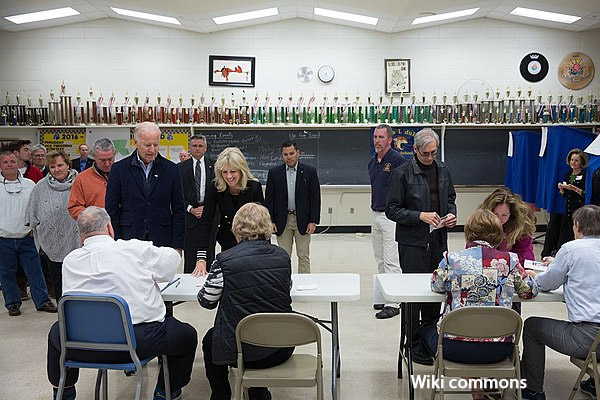 Amid the outrage from liberals over the recently passed election security law in Georgia, GOP-controlled state legislatures are advancing bills in other states that Republican supporters say are necessary voting security measures but Democrats decry as attacks on voting rights.

The efforts were highlighted by Democrats as they pushed S. 1 and H.R. 1 in Congress last month -- bills that would take many elements of elections out of the hands of the states and put them under the federal government's control.

But the conservative group Heritage Action says these state-level bills won't limit voting rights, but rather increase election security. And the group last month invested at least $10 million in support of these laws in several key swing states.

GEORGIA ELECTION OFFICIAL WARNS BIDEN TO STOP 'LIES' ABOUT VOTING LAW: 'SOMEONE IS GOING TO GET HURT'

"States across the nation are working to secure their elections and restore voter trust. Grassroots activists and state lawmakers alike are hard at work making it easy to vote and hard to cheat," Heritage Action Executive Director Jessica Anderson said in a statement. "I am thrilled to see so many states advancing laws that will inspire confidence in our elections, the bedrock of our democracy."

While many eyes have been on Georgia, here's the status of efforts to tighten election laws in some other important states.

In Texas, the state Senate has already advanced S.B. 7 and the state House is considering H.B. 6, two bills aimed at tightening voting rules on a variety of fronts.

S.B. 7 would prohibit election officials from sending out unsolicited mail ballots; ban drive-through voting; define a poll watcher's role and say he or she is "entitled to sit or stand near enough to see and hear the activity"; sets certain early-voting hours; and more.

H.B. 6, meanwhile, passed out of a House committee but still needs a full vote. It would ban paid "vote harvesting services" and report deaths to voter registration officials so deceased individuals can be removed from the rolls.

These bills will need to be considered by the full House before May 10 if they are to pass. They've lead to protests in front of the Texas statehouse, according to FOX 7.

"This is a voter suppression bill and we should not have that in Texas, not in 2021," Democratic Sen. Royce West of Dallas said of SB 7, according to FOX 7.

"We must stop this race-baiting on every issue," he said, according to FOX 7. "Election security is what the public wants. Over 75% support voter ID which Congress wants to eliminate by the way. Voters want confidence in their election system, SB 7 is not voter suppression, it's voter security."

Arizona is advancing a variety of bills that take more limited actions. One bill, which has already passed, is meant to ban government entities from using private money to conduct elections. This is in response to money given by Facebook CEO Mark Zuckerberg to help run elections in cities and states last year.

Also already passed is a bill that requires the health department to provide the secretary of state with information about deaths so those individuals can be removed from voter lists.

Other bills that have yet to pass include one that would require photo ID -- or two different items that aren't photo ID but include the name and address of the voter -- for early voting. Another would remove a voter from the early voting list if they don't vote early in two consecutive election years.

Those bills are expected to get final votes in the next week or so.

Florida is taking more of an omnibus approach, including several changes in individual House and Senate bills.

The most high-profile piece of legislation is HB 7041. It bans ballot-harvesting; allows drop boxes but only under certain security measures; bans officials from sending unsolicited mail ballots; bans the use of private funds to run elections; and forces the state department and motor vehicle department to work together to update voter files when drivers licenses or ID cards are changed.

There is also a similar bill in the state Senate.

Gov. Gretchen Whitmer addresses the state during a speech in Lansing, Mich. Gov. Whitmer on Wednesday, March 31, 2021. Whitmer is likely to veto any election bills passed by her state's GOP legislature, so Republicans are planning to introduce a ballot measure to accomplish a handful of goals, including voter ID. (Michigan Office of the Governor via AP, File) (Michigan Office of the Governor via AP)

Republican legislators in Michigan are in a different situation as they cannot expect Democrat Gov. Gretchen Whitmer to sign any legislation that they pass.

But they are working on a way to bypass the governor with a ballot initiative. No initiative has been proposed yet, but Fox News is told it could include voter ID for in-person and absentee voting; a ban on private money for elections; drop box security; and a ban on ballot harvesting.

The Wisconsin Senate passed a bill banning private money from being used to run elections. Tennessee passed a similar bill, according to The Tennessee Star.