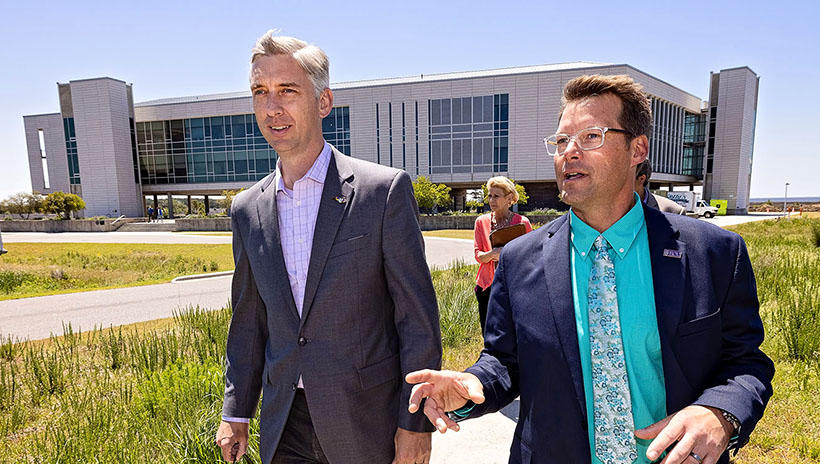 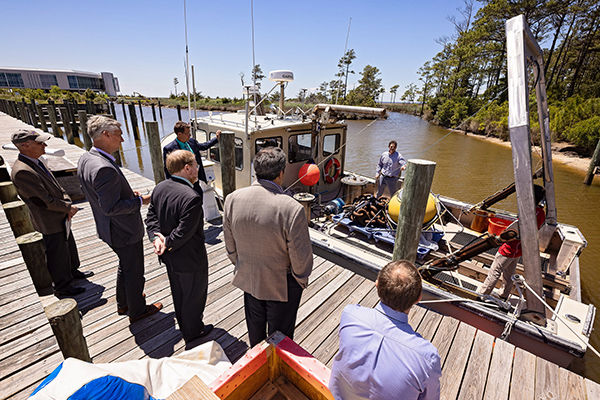 During the visit, ECU and UNC System leaders toured the facility and its fleet, including this 42-foot research vessel.
As he began his tenure as East Carolina University's 12th chancellor, Dr. Philip Rogers launched a learning and listening tour called Pirate Perspectives to speak with ECU stakeholders throughout eastern North Carolina. On Friday he toured ECU's Outer Banks Campus, home of the Coastal Studies Institute, along with Peter Hans, president of the University of North Carolina System.

The LEED gold-certified facility was completed in 2013 and is located on 213 acres of marshes, scrub wetlands, forested wetlands and estuarine ecosystems near Wanchese. It features classroom and research space for faculty and students from ECU, UNC, N.C. State, UNC Wilmington and Elizabeth City State University, as well as a fleet of inshore and offshore research vessels.

"There's a lot happening along the coast," said Dr. Reide Corbett, dean of Integrated Coastal Programs at ECU. "There's a lot of change taking place along the coast, and what we are doing is providing the scientific expertise to deal with some of that change, to think about the policies that can work for the community, and also giving the community a voice. What we want to do is allow the community to come in and work with us to provide them that voice, provide them some of the scientific expertise, such that we can create a more resilient coast."

Hans and Rogers received an overview of the research being conducted at the site, including remote sensing and computational modeling, maritime archaeology, coastal biology, renewable ocean energy and the impact and mitigation of sea level rise. The interdisciplinary nature of the facility is one of its greatest strengths, Corbett said. 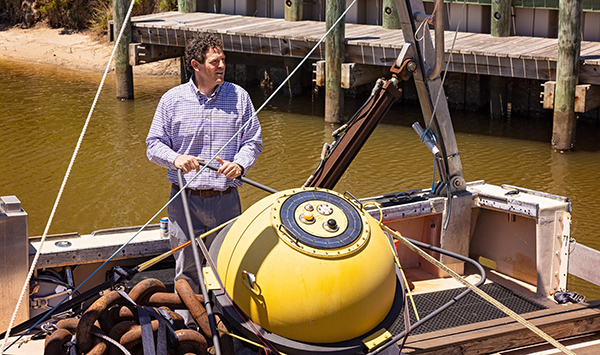 Dr. Mike Muglia describes some of the features and capabilities of “Miss Caroline,” a 42-foot research vessel.
"The diversity that we have is pretty incredible, and fairly unprecedented in marine facilities," said Dr. Siddarth Narayan, assistant professor in ECU's Department of Coastal Studies. "We are bringing these interdisciplinary teams together that are allowing us to really consider the problems along the coast with very different perspectives."

Along with other university leaders including Interim Provost Grant Hayes, Chief of Staff Chris Locklear and Dr. Ron Mitchelson, special assistant to the chancellor, Rogers and Hans also met with members of the CSI board of directors to discuss the importance of the facility and its mission, as well as the vision for its future.

One of the primary challenges is providing housing for faculty and students due to the facility's remote location and the cost of housing near the tourist-driven Outer Banks. ECU currently leases residential space from Friends of the Elizabeth II, but a long-term solution is needed to allow more students and faculty to spend more time at the Outer Banks Campus.

Marco Agostini, a student who participated in the Semester at the Coast experience and is now conducting research as an intern, said his experiences at the site have helped him find an educational path that will make it possible to combine his interests in computer science, environmental science and sustainability into a future career.

"On top of that, the Coastal Studies Institute is the perfect place to meet scientists and researchers who work in the coastal studies field," said Agostini, an EC Scholar and Honors College student from Wilson.

Rogers said the facility and its partnerships are a perfect example of ECU's mission, from the impact on students like Agostini to the interdisciplinary and multi-institutional research partnerships that have formed.

"When I think about what this place embodies, it embodies student success. It is the picture-perfect version of what it means to deliver on public service," he said. "And more than anything, it's the epicenter of regional transformation. And that's what we're all about."

The researchers at CSI, Corbett said, are working to tackle problems on a global scale, from the impact of sea level rise on coastal communities to how to harness the energy of the ocean to provide clean drinking water. The facility also hosts summer camps and outreach programs for K-12 students and partners with organizations such as N.C. Aquariums and Jennette's Pier to provide public outreach.

Hans said it's gratifying to see the growth and success of the Coastal Studies Institute.

"When the UNC System tapped ECU to lead CSI, it was with the vision of that interdisciplinary cooperation between fields, but also between UNC System schools," he said. "And it's very pleasing to me to see the momentum in those areas, and I think it sets the stage for even greater success in the years to come."
Go Back